An oversized rarity in a GreatCollections sale is attracting an appropriately large amount of interest. 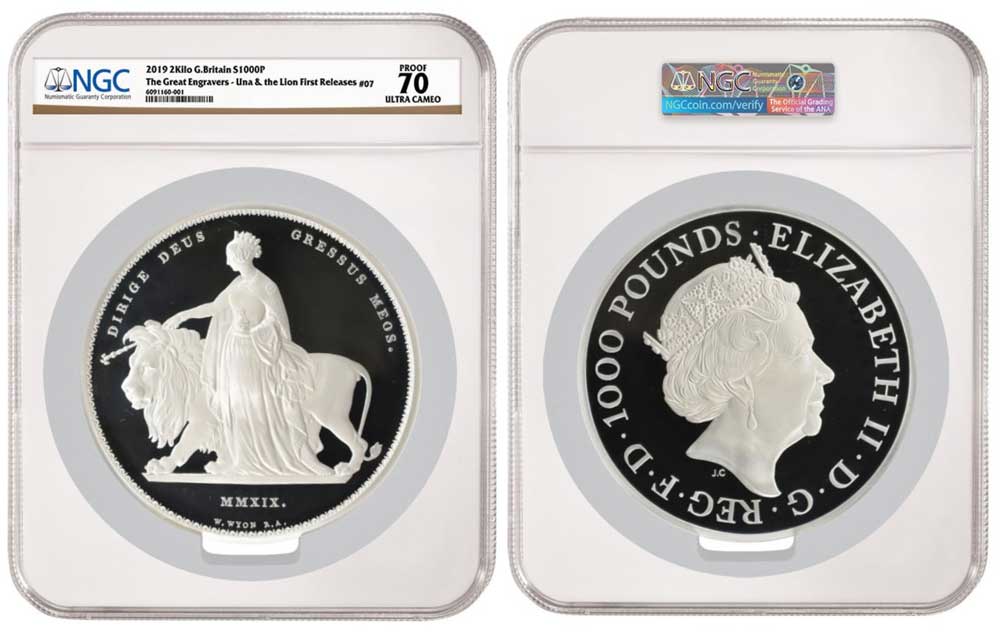 An oversized rarity in a GreatCollections sale is attracting an appropriately large amount of interest.

A British coin struck in two kilograms of silver and certified by Numismatic Guaranty Corporation® (NGC®) is being offered in a GreatCollections auction ending on April 18, 2021. Bidding for the modern rarity had already passed $23,000 ten days before the auction, more than 10 times the value of the silver itself.

The Great Britain 2019 2 Kilogram Silver “Una and the Lion” £1,000 is graded NGC PF 70 Ultra Cameo (lot 972545). NGC attributed it as #7 out of only 40 such coins issued by the Royal Mint. This is the first time one of them has been offered on the secondary market, according to GreatCollections.

These coins pay tribute to the renowned “Una and the Lion” design used on the 1839 Gold 5 Sovereign, which is recognized as one of the most beautiful coins in numismatics. It was designed by Royal Mint Chief Engraver William Wyon to honor the beginning of the reign of the young Queen Victoria.

The original coin’s obverse features Queen Victoria, who was Queen Elizabeth II’s great-great-grandmother. On the reverse, Queen Victoria is depicted walking with a lion, in the character of Lady Una from Edmund Spenser’s “The Faerie Queen.” This scene inspired the name generally used to refer to this coin.

The 2019 Una and the Lion portrays the same image of Queen Victoria walking with a lion on the reverse, but the obverse of the modern version depicts the effigy of the current monarch, Queen Elizabeth II. Its release was part of a special commemorative series, Great Engravers, that celebrates centuries of skilled artists who have shaped British coinage.

With a diameter of 150 mm (nearly 6 inches), the coin is encapsulated in NGC’s Mega Holder. The coin also earned NGC’s First Releases designation because it was received by NGC or an approved NGC depository within 30 days of its release.

The lot also comes with the original Royal Mint wooden presentation case and its numbered Certificate of Authenticity.