A rare English gold coin struck during the reign of Queen Anne and certified by Numismatic Guaranty Corporation® more than double its pre-auction estimate – in a Spink sale on September 15, 2020. 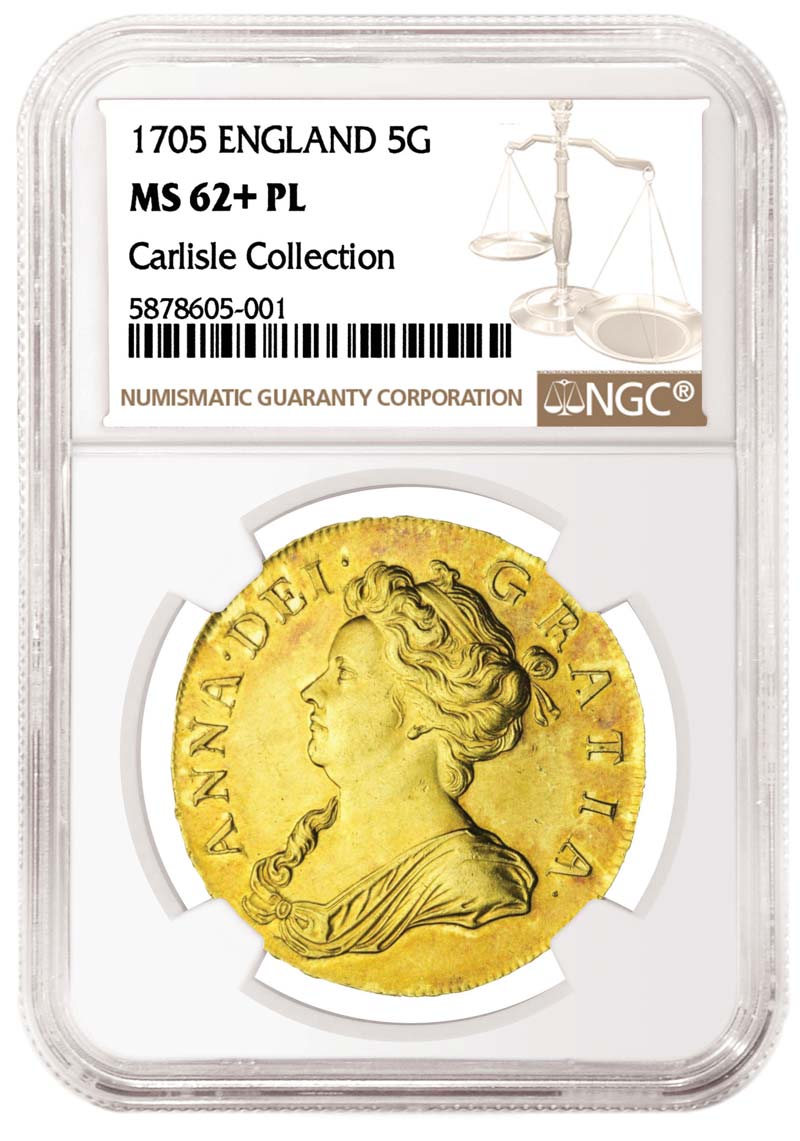 SARASOTA, Fla. (September 21, 2020) — A rare English gold coin struck during the reign of Queen Anne and certified by Numismatic Guaranty Corporation® (NGC®) realized over $300,000 – more than double its pre-auction estimate – in a Spink sale on September 15, 2020. A host of other NGC-graded coins also raced past their pre-auction estimates in the Stratos Sale of Spectacular English Gold Coins , organized by the prestigious London-based auction house.

Meanwhile, two more coins of the same denomination, an England 1678/7 Five Guineas graded NGC AU 58+ and a Great Britain 1738 5 Guineas graded NGC MS 62 , each realized £108,000 (about $139,000 USD), several times their pre-auction estimates. Both coins are unsurpassed in the NGC Census and pedigreed to the Chalaza Collection.

“Spink is proud to have had the opportunity with this sale to offer phenomenal selections from several superb collections,” said Spink Senior Coin Specialist Greg Edmund. “I have no doubt that NGC’s expertise and accuracy in certifying rare British coins helped give bidders greater confidence.”

“British rarities like these have seen incredible demand from collectors,” said Mark Salzberg, NGC Chairman and Grading Finalizer. “The impressive results from this sale illustrate the importance and value of NGC certification.”

The sale also included these other NGC-certified highlights, all of which at least doubled their pre-auction estimates:

Prices realized include buyer's premium. All estimates are provided by the auction house.

NGC is the world’s largest and most trusted third-party grading service for coins, tokens and medals, with more than 47 million collectibles certified. Founded in 1987, NGC provides an accurate, consistent and impartial assessment of authenticity and grade. Every coin that NGC certifies is backed by the comprehensive NGC Guarantee of authenticity and grade, which gives buyers greater confidence. This results in higher prices realized and greater liquidity for NGC-certified coins. To learn more, visit NGCcoin.com or NGCcoin.uk