Five 19th century US pattern coins that belonged to Charles E. Barber, the US Mint Chief Engraver from 1880 to 1917 have been authenticated and graded. A pattern coin is one that features a proposed design, composition or denomination. 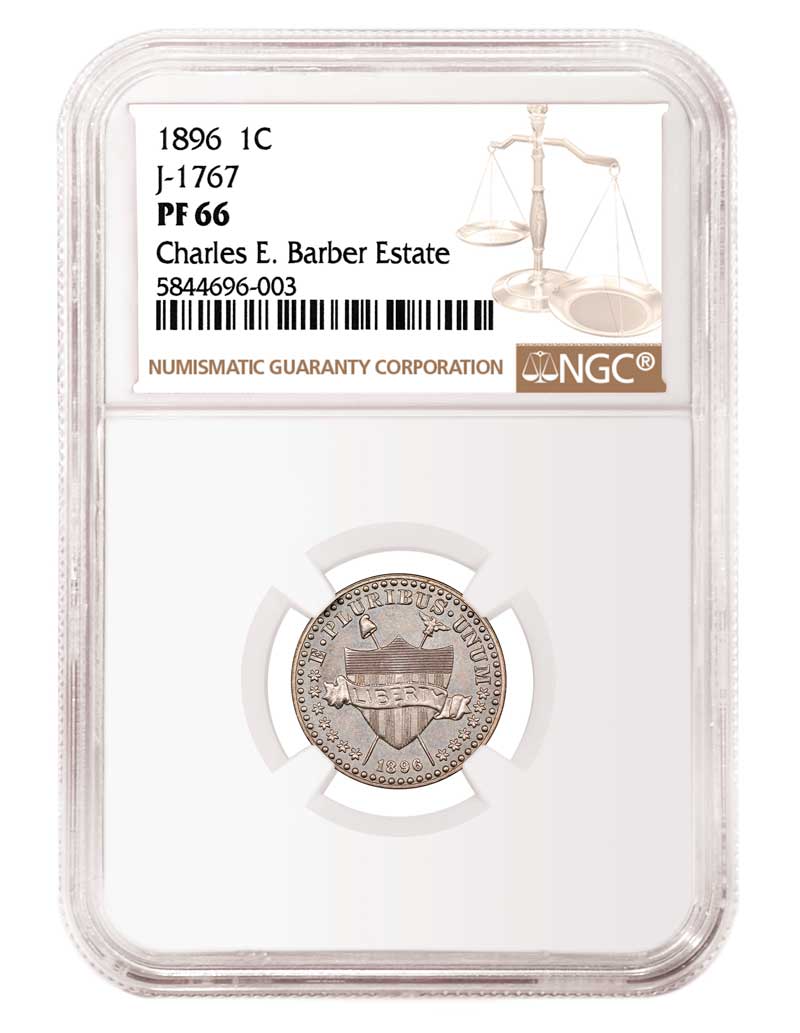 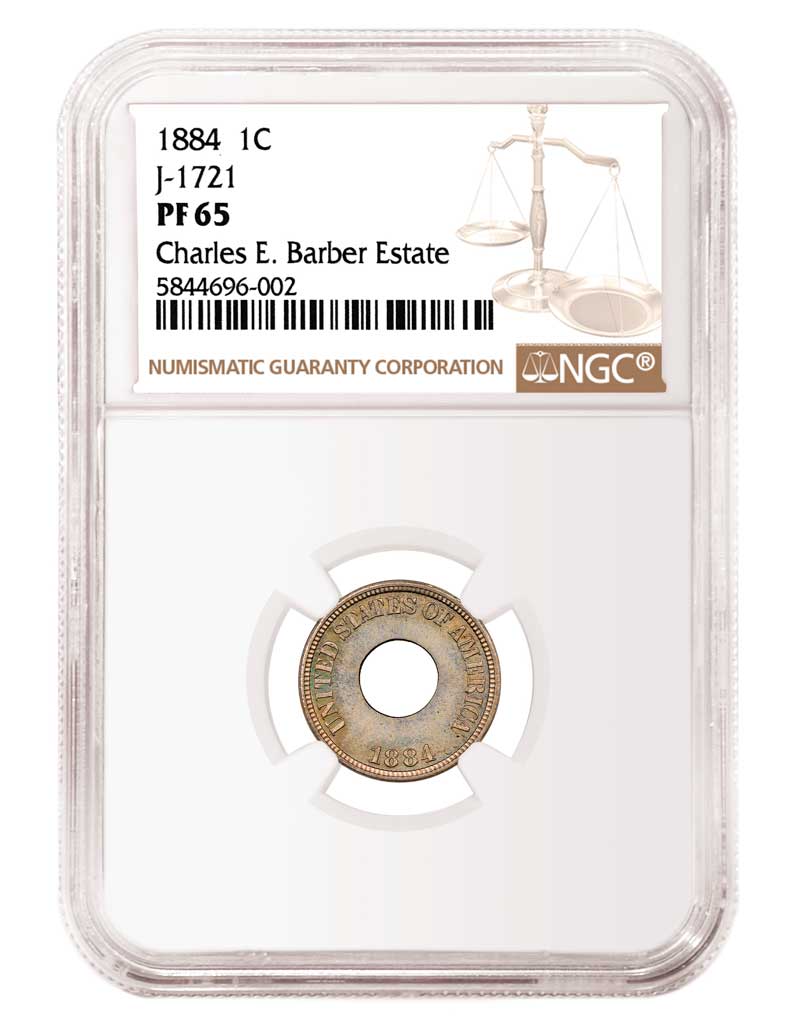 SARASOTA, Fla. (Feb. 10, 2020) — Numismatic Guaranty Corporation® (NGC®) has certified five 19th century US pattern coins that belonged to Charles E. Barber, the US Mint Chief Engraver from 1880 to 1917. A pattern coin is one that features a proposed design, composition or denomination.

Three of the patterns were designed and sculpted by Barber, while the other two were executed by his father, William, who preceded him in the role of Chief Engraver, serving from 1869 to 1879. The five pattern coins were submitted to NGC on behalf of their descendants.

William Barber served as 5th Chief Engraver of the US Mint from 1869 to 1879, and his legacy includes the US Trade Dollar, struck only for a short time to compete with other nations’ silver coinage in Asia. He also produced many patterns.

The first of the Barber Estate coins is an example of Judd-696 (attributed according to J. Hewitt Judd’s United States Pattern Coins). This 1869 Pattern Dime is struck in silver and is just faintly larger in diameter than half dimes of the period. Rated R-5 (31-75 known), it was graded NGC PF 63.

Judd-696 is an example of the Standard Silver series of patterns created in 1869-70. These were proposals for a silver coinage of reduced size and weight at a time when silver issues were trading at a premium to the greenbacks and fractional notes that dominated commerce. Ultimately, this plan was rejected, but it left a rich legacy of experimental strikes in various die marriages and compositions.

A second example of William Barber’s Standard Silver work is featured in the Barber Estate submission. This is an 1870 Pattern Dime, attributed as J-843, that is similar in its design elements but features an alternative version of the Liberty bust and wreath. Also struck in silver, J-843 is rated R-6 (13-30 known). It has been certified as NGC PF 64.

William Barber and his wife immigrated to the US from England in 1852, when son Charles was just 12 years old. Following William’s death, Charles was appointed his father’s successor as Chief Engraver. One of the most prolific coin engravers in US Mint history, Charles Barber lends his name to three series that began in 1892: a dime, quarter and half dollar. 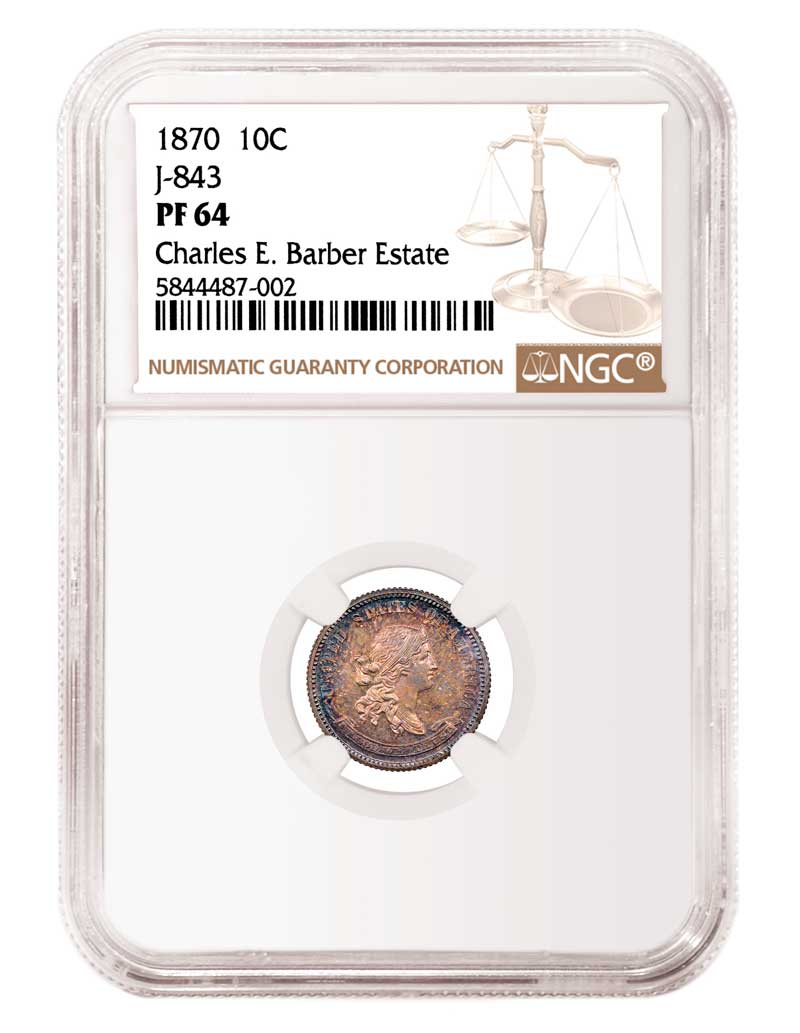 Charles Barber also created a broad range of pattern coins, including a unique series of “holey” one-cent and five-cent pieces in 1884. Conceived by artist Eastman Johnson — perhaps as an aid to the blind — these coins with center perforations were never approved for mass production, and only rare patterns survive from this experiment.

The Barber Estate submission includes two examples of Judd-1721 cents struck in nickel (rated R-5). These display a very simple design comprised of a wreath, a tiny shield and quite spare text. They are graded NGC PF 64 and NGC PF 65.

The final coin is an example of Judd-1767, an 1896-dated five-cent piece coined in nickel. It features an obverse displaying a shield somewhat similar to that on the reverse of current cents. This is paired to a reverse showing the national legend around a wreath that encloses the denomination.

The US Mint was not contemplating a change to the cent, and the dies were simply a test of alternative metallic compositions, including pure nickel. Certified as NGC PF 66, the most recent edition of the Judd pattern book reports seven known, making this newly revealed example the eighth.

“Numismatics is a dynamic field, and you never have to wait long for another exciting discovery,” said NGC Chairman Mark Salzberg. “NGC is honored to have certified these historic pieces from a family that had such a lasting impact on the coin collecting world.”

The coins’ NGC certification labels include the important pedigree of Charles E. Barber Estate. They were submitted to NGC by John Frost, a numismatic author and president of the Barber Coin Collectors’ Society, on behalf of great-grandsons of Charles Barber.