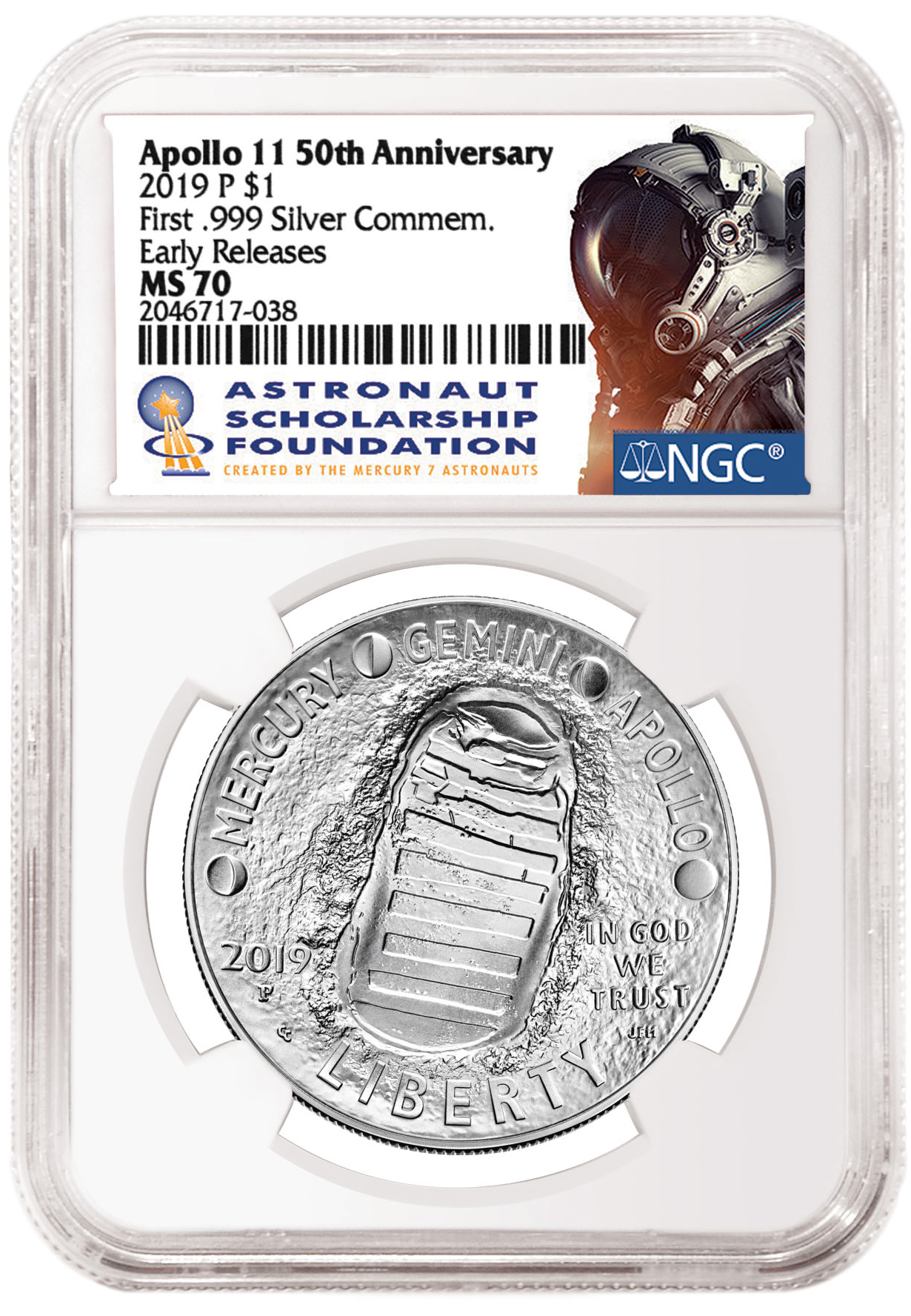 The Apollo 11 50th Anniversary Commemorative coins are among the most highly anticipated US Mint issues of the last decade. The coins are particularly noteworthy for their curved design, which resembles the view of the moon’s surface from an astronaut’s helmet.

Also significant is the curved silver five-ounce coin. The largest curved coin ever issued by the US Mint with a diameter of three inches, its production presented numerous challenges. These were ultimately overcome and the Apollo 11 silver five-ounce is expected to become one of the most desirable US modern coins in recent memory.

The legislation that authorized the Apollo 11 coins designated the ASF as one of three organizations that would benefit from a surcharge applied to the sale of these coins. The additional beneficiaries are the Smithsonian Institution’s National Air and Space Museum and the Astronaut Memorial Foundation.

ASF was created in 1984 by the six surviving Mercury program astronauts as well as the widow of the seventh. Each year, ASF provides more than 50 scholarships to outstanding college students in science, technology, engineering and mathematics.

The six manned flights of the Mercury program enabled NASA to master the technology necessary to put astronauts in orbit. This critical step paved the way for the Gemini and Apollo programs that followed, culminating with the Apollo 11 moon landing in July 1969. That historic mission is celebrated by the coins being released this month.

The NGC ASF label is the default label for Apollo 11 50th Anniversary Commemorative Coins submitted to NGC and carries an automatic $5 fee. A royalty will be paid to the ASF by NGC for each label used.

“NGC’s leadership in third-party coin certification made it an ideal partner to collaborate with ASF to promote its important mission and the Apollo 11 50th Anniversary Commemorative Coin Program,” says Tammy Sudler, President & CEO of ASF. “NGC-certified Apollo 11 Commemorative Coins encapsulated with the NGC ASF label are unique and attractive collectibles that not only honor one of history’s greatest achievements but also support the mission of ASF.”

“The Apollo 11 50th Anniversary Commemorative Coins celebrate one of mankind’s greatest triumphs,” adds Mark Salzberg, NGC Chairman and NGC Grading Finalizer. “NGC is pleased to work with the Astronaut Scholarship Foundation to honor this event and these coins with an attractive label that is sure to appeal to coin collectors and space enthusiasts alike.”