On National Heroes and Nationally-Owned Enterprises

In 1975, Venezuela nationalized its oil industry – an important step in the long and eventful relationship between the country and its oil supplies. A gold coin commemorates the event. It is one of the rarest pieces of Venezuelan numismatics. 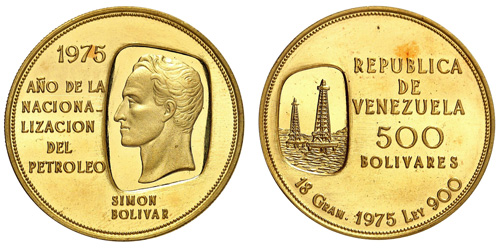 In auction 371 Künker offers a great rarity of Venezuelan coinage as lot No. 2421. The 500-bolívares gold coin was minted in 1975 on the occasion of the nationalization of the country’s oil industry, the mintage figure amounted to as few as 100 specimens. On one side, we can see two oil towers. The other side features a portrait of Simón Bolívar, the great freedom fighter of South America who is still admired in Venezuela and other parts of the continent today. What is the relationship between the national hero and the nationalization of the oil industry? The coin throws us right into the complex history of Venezuela.

Venezuela and Its Oil: A Boon and a Bane

For more than 100 years, the rich oil deposits under the Maracaibo Basin have played a key role for the fate of Venezuela. In 1917, oil was found in the South American country for the first time ever. Only 10 years later, Venezuela had become the world’s second-largest oil exporter. Many people made a lot of money thanks to the oil, especially the foreign companies that extracted and refined it.

Obviously, Venezuela would have liked to have a bigger share of the pie for itself. And this brings us to the mid-1970s. We recall this period as the time of the oil crisis. In Germany, everybody remembers the car-free Sundays of 1973, when people could go for a walk on the Autobahn. The situation was due to a cutback in production in the Arab world as a reaction to the Yom Kippur War. The oil price shot up to unprecedented levels. It was a good time for oil-rich Venezuela and the foreign companies that were involved in the country’s oil production. Their revenues increased further and further. 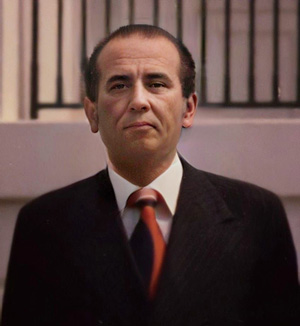 In this context, the moderate socialist Carlos Andrés Pérez came to power in 1974. He nationalized the entire oil sector and its huge revenues – and this is the occasion on which the coin offered by Künker was issued. In the following years, Venezuela became one of the wealthiest countries in South America. Between 1973 and 1983, the revenues made from the export of crude oil totaled astounding 240 billion dollars, the equivalent of 696 billion dollars today. The boom continued until the early 1980s. The state-owned oil company Petróleos de Venezuela, Petroven for short, even expanded abroad. They bought refineries in the USA and Europe and became the world’s third-largest oil company.

But then the tide turned – not for the first time in Venezuela’s history. After all, oil is a double-edged sword that does not only bring wealth. Do you know the term “Dutch disease”? Economists use it to describe a complex phenomenon. It can be summarized as follows: countries that make very high profits from exporting commodities experience slumps in other economic sectors. Venezuela is considered a prime example of this phenomenon. When the oil price started to collapse in 1983, the country couldn’t compensate for the missing revenues. The boom was followed by a severe, long-lasting economic crisis. That’s why the oil industry was reopened to foreign participation in the 1990s – and then Hugo Chávez came to power in 1999. The socialist, who was considered rather problematic by many other countries, got lucky – in 2007 the oil price rose again to unprecedented heights. Under the battle cry “The oil belongs to all Venezuelans!”, President Chávez nationalized the country’s oil industry once again in 2007. 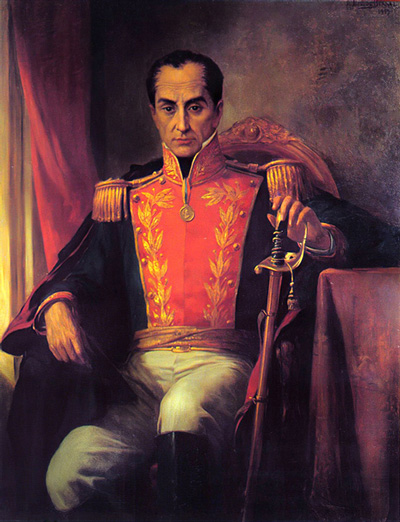 Chávez referred to his reforms as a revolution. And he gave it a revealing title: The Bolivarian Revolution. In this way, Chávez linked his measures to a man whom he considered his great role model in the “anti-imperialist” fight against foreign countries and who enjoyed great popularity as a national hero in Venezuela: Simón Bolívar – the man we see on the reverse of the 1975 gold coin.

Bolívar (1783-1830) is an icon of Latin America. In the early 19th century, he led the continent’s war of independence against Spanish colonial forces, and he is considered a national hero of many South American countries that owe their independence to him. Bolívar is seen in that way in Bolivia, which was named after him, and in Venezuela, whose borders include his birthplace – much to the pride of the Venezuelan people.

The fact that Bolívar’s death in 1830 was perceived more as a liberation and a relief by his contemporaries didn’t interest anyone anymore just a few years later. To this day, he is admired, revered, and transfigured. All political camps like to refer to Bolívar. Accordingly, he often appears on the coins of Venezuela and other South American countries. 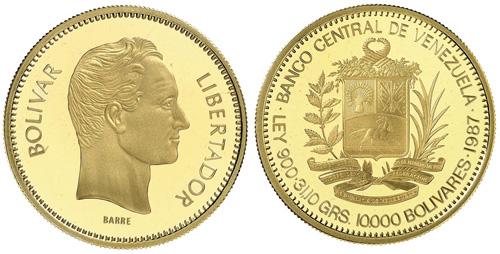 Would Bolívar have approved of this nationalization of the oil industry? Well, since he died in 1830 – long before the combustion engine was invented – he obviously never said anything about this. From a socialist point of view, however, the nationalization can be perfectly interpreted as a decolonization and a liberation à la Bolívar given that the act prevents foreign countries from making money with Venezuelan oil. That might be the reason why his portrait is depicted on the 1975 coin. By the way, the Venezuelans also named their currency after him, and this name hasn’t been changed since 1879: the bolívar. 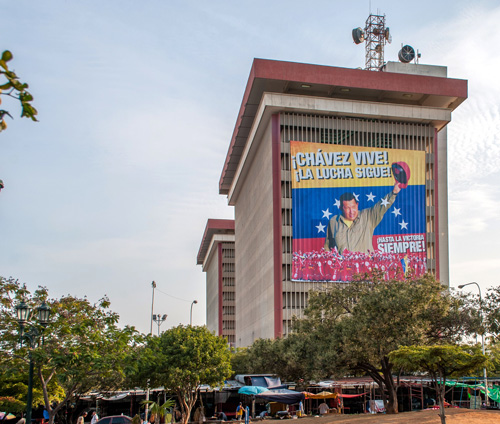 ((05 – A building of the state oil company Petroven with a Chávez poster.))

The nationalization of the oil industry in 1975 was an important moment in Venezuela’s history and brought great prosperity to the country. The second nationalization in 2007 incidentally had a completely different outcome. Since urgently needed investments failed to materialize and massive mismanagement prevailed, the oil industry – and with it the whole of Venezuela – fell into a downward spiral. To this day, the country is struggling with an ongoing economic crisis and is no longer one of the continent’s richest but one of the continent’s poorest countries. Every few years, a few zeros are removed from the bolívar to fight the never-ending inflation: in 2018 it was five zeroes, in 2021 six.