One of the Earliest American Coins Up For Bid

Heritage Auctions will be offering a wonderful piece of early American history in Sale 1329, the April US Coins Auction: a 1792 Half Disme certified as XF45 by PCGS. 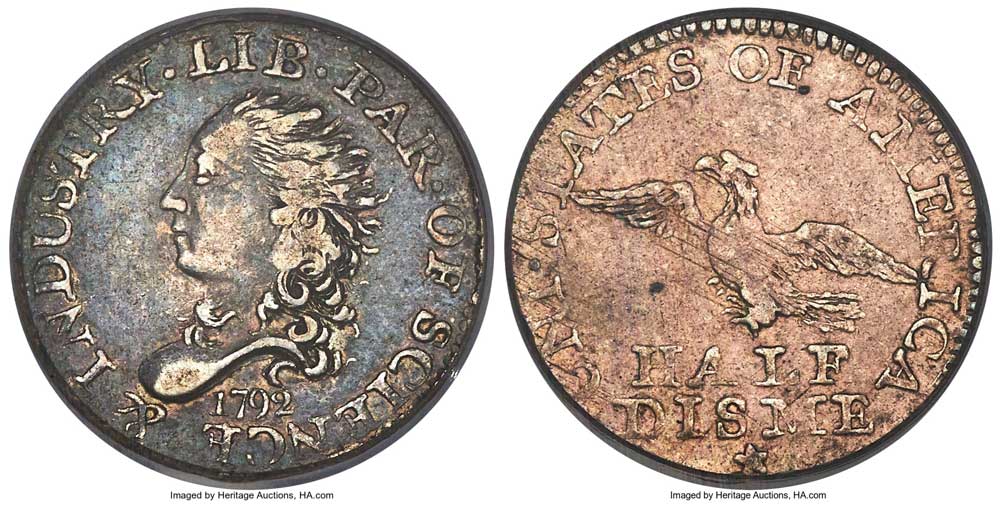 Heritage Auctions will be offering a wonderful piece of early American history in Sale 1329, the April US Coins Auction: a 1792 Half Disme certified as XF45 by PCGS.

The famous 1792 Half Disme is one of the most coveted issues in all of American numismatics and has a great story behind it. These coins are believed to have been designed by British engraver William Russell Birch, and then struck in the coachhouse cellar of John Harper, a Philadelphia sawmaker. They were the first coins to be produced under the auspices of the Mint Act of 1792, a famous piece of legislation among coin collectors!

A small issue of either 1,500 or 2,000 coins were struck, and the silver to create these pieces was supposedly donated by George Washington himself! While we cannot prove this widely-believed story, many collectors and historians feel that the silver used to strike these coins was made from silverware that George Washington agreed to have melted down. While this part of the story may be anecdotal, it has lived on through the years and only heightens the appeal of these pieces.

The engraver William Russell Birch executed other coin designs very similar to that of the half disme, making him the most likely candidate for authorship according to numismatic scholars. While some aspects of these coins' story cannot be determined today and have been lost to the sands of time, that does not make them any less desirable to collectors. Given that the US Mint did not start officially minting coins until 1793 and 1794, these are some of the earliest American pieces available to collectors!