The top five picks from the Heritage Signature Auction of World Paper Money at the upcoming Long Beach coin show, as chosen by CDN Editor Patrick Ian Perez. These are n 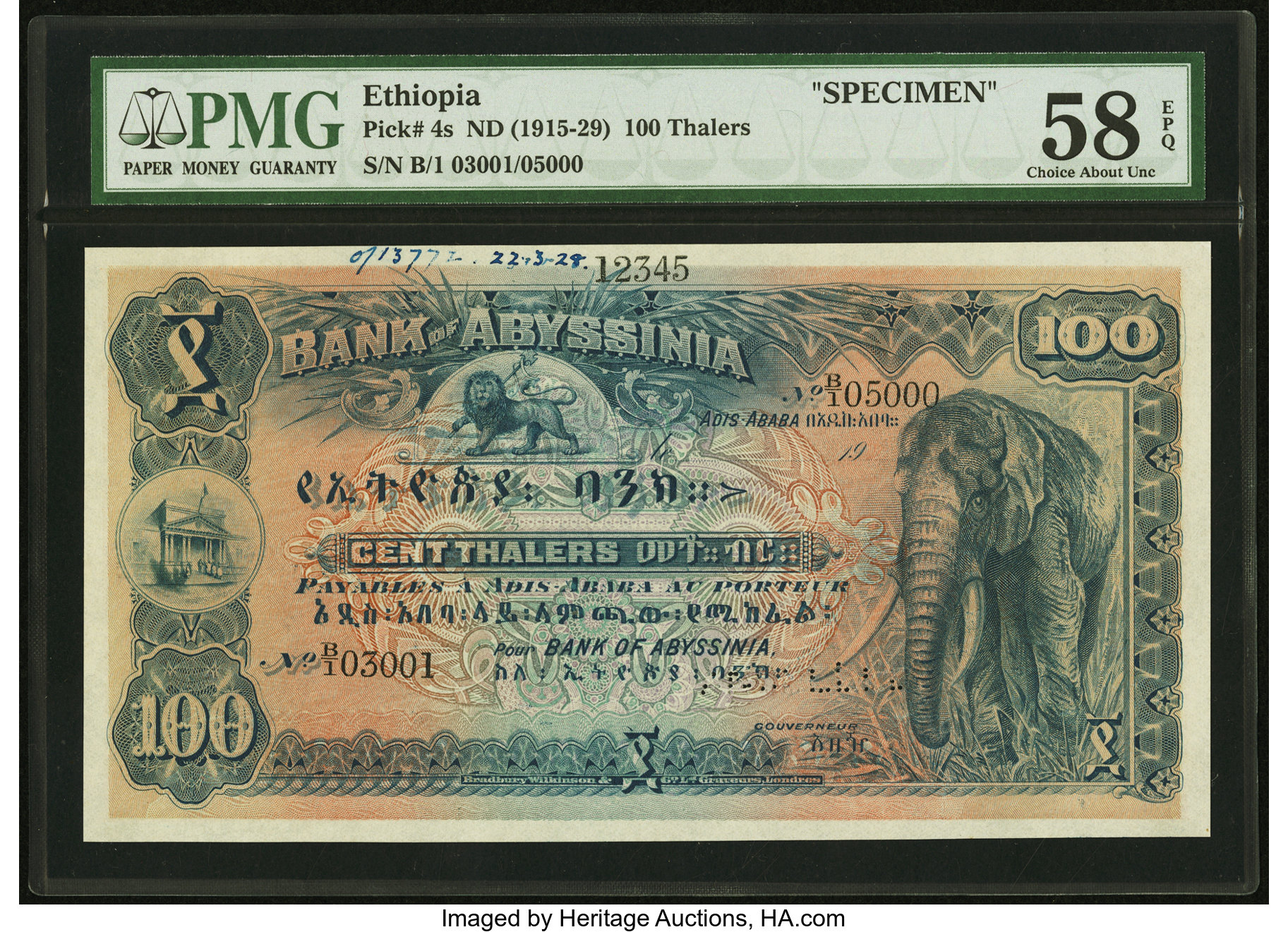 The top five picks from the Heritage Signature Auction of World Paper Money at the upcoming Long Beach coin show, as chosen by CDN Editor Patrick Ian Perez. These are not necessarily the rarest or most expensive, but in our opinion the most interesting. 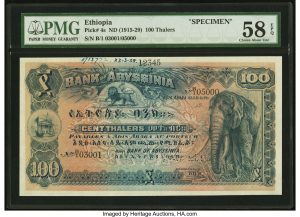 This large note has been famous for a long time due to the impressive vignette of an elephant to the right, and the deep blue and orange tint. It is a classic example of British banknote engraving. All notes issued on the Bank of Abyssinia are scarce as most were redeemed with the opening of the Bank of Ethiopia in 1932 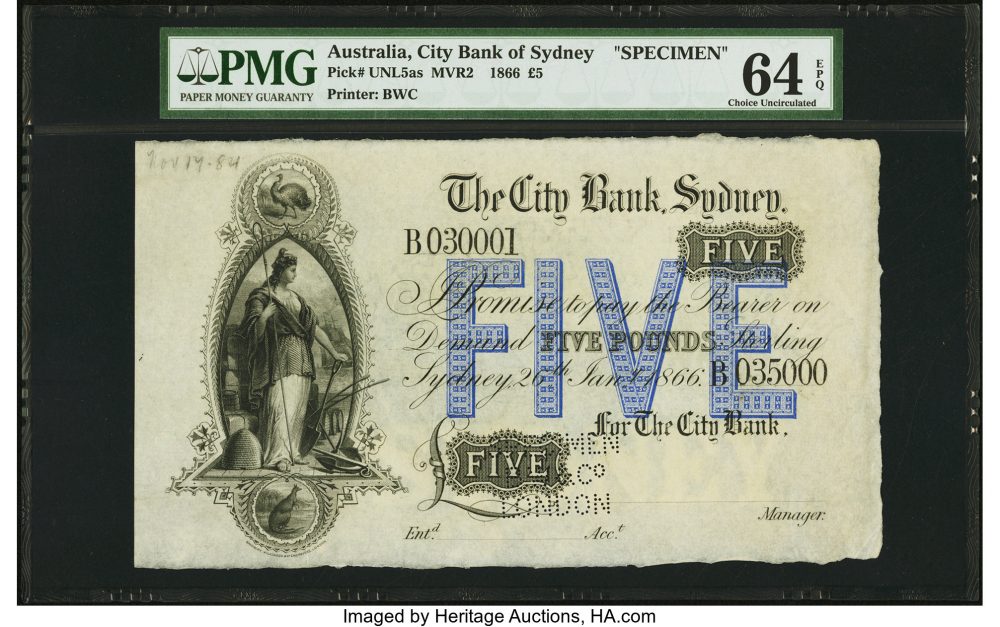 Like many other country, in the early days of the Australian economy, private banks were given the right to issue banknotes. Many banks had notes prepared, but very few actually issued them and today any fully signed and issued note from an Australian private bank is quite rare. Fortunately we are left with many Specimen notes that feature large size and beautiful engraving. This note is one such example. 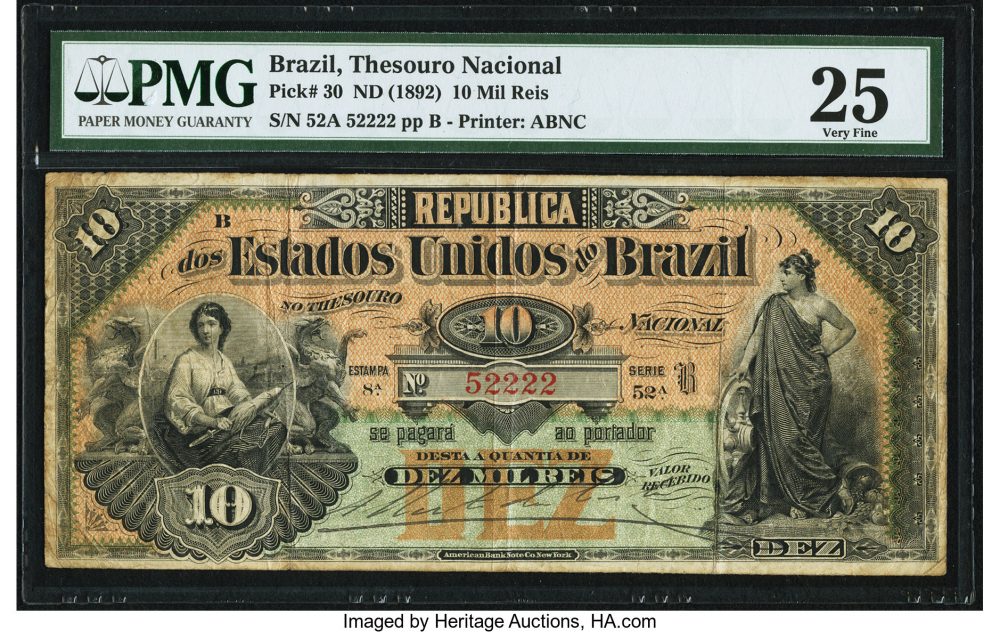 In the early days of the Brazilian Republic the paper money was issued by the National Treasury, and many of these notes, especially above the grade of Fine, are prizes for the collector. This note was produced by the American Bank Note Company and is tremendously attractive with tints of lime green and light orange. The back is very ornate and should not be overlooked. High grade for the type, as tropical climates like that found in Brazil is brutal for paper money. 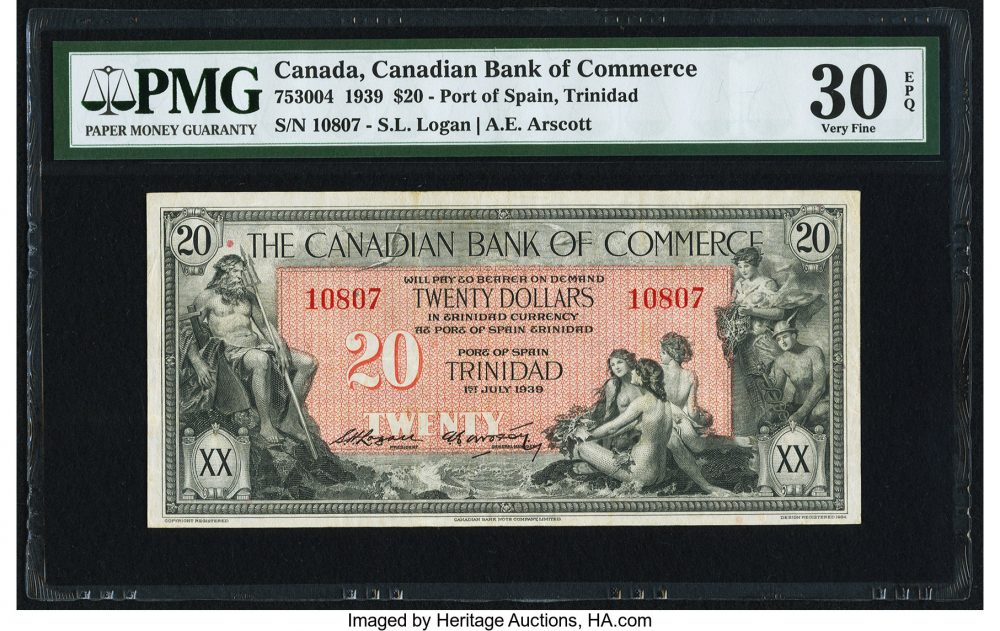 This note has so much going for it that its hard to describe. In the early part of the 20th century, Canadian note-issuing banks produced notes for circulation in the Caribbean, and this rare piece is an example of that. The final family of notes from the Canadian Bank of Commerce feature an iconic Art Deco design and this piece, in light red instead of the yellow of the regular Canadian issue is one of nine pieces known. Issued in 1939 and payable at Port of Spain, Trinidad. The grade make this note one of the finest known, and the eye appeal is that of an Extra Fine. 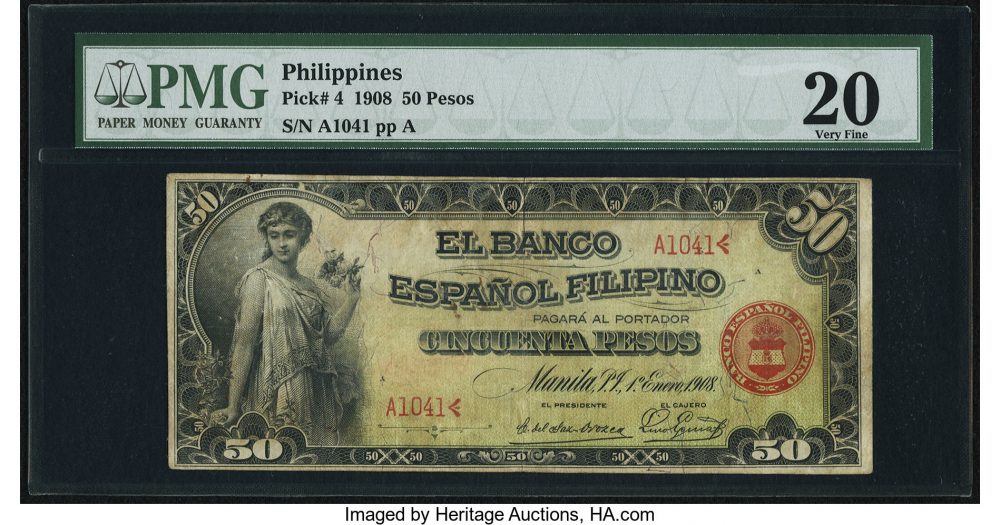 The initial series of banknotes issued under the Commonwealth of the Philippines were the only one using this bank title and Spanish language, making them both scarce and a unique type. This high denomination piece is problem-free, which is uncommon, and a solid Very Fine. The price nowhere matches the scarcity of this piece.
https://currency.ha.com/itm/world-currency/philippines-banco-espanol-filipino-50-pesos-1908-pick-4-pmg-very-fine-20/a/4015-28540.s?ic4=ListView-ShortDescription-071515