The famed D. Brent Pogue US currency collection certified by Paper Money Guaranty® showed the resilience of the market and realized more than $9 million in an auction held Thursday, March 19, by Stack’s Bowers Galleries. 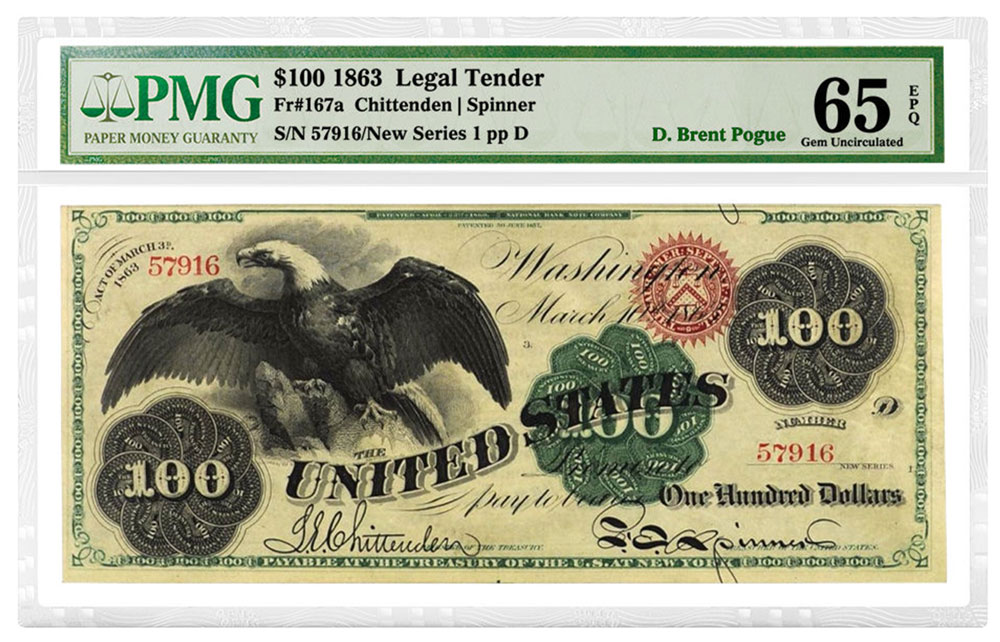 The incredible results showed the resilience of the numismatic marketplace in the face of the current health and economic challenges. Of the 224 PMG-certified notes in the collection, 27 sold for more than $100,000 each.

Pogue, who died unexpectedly in July 2019, assembled the most valuable collection of coins and banknotes in history, with a market value well above $100 million. His notes, which were recertified by PMG in January 2020, include many finest-known examples, special serial numbers, Star / replacement notes and other great rarities.

Many of the notes are pedigreed to some of the most important collections of the last century. “We are extremely pleased with the results of the D. Brent Pogue Collection,” said Stack’s Bowers Director of Currency Peter Treglia. “We also deeply appreciate the efforts of PMG, which was instrumental in helping us get the collection certified and ready for presentation at auction” “It’s been our honor to handle the certification of this extraordinary collection,” added PMG Chairman Mark Salzberg. “We are thrilled to see such strong results.”

The sale results were led by an 1863 $100 “Spread Eagle” Legal Tender note graded PMG 65 Gem Uncirculated EPQ that realized $432,000. The note, Fr. 67a, is a Gem example of the series that has a bald eagle perched on a rock with wings spread dominating the left side of the note’s front. PMG has graded a total of nine examples, none of them nearly as fine as the Pogue note. 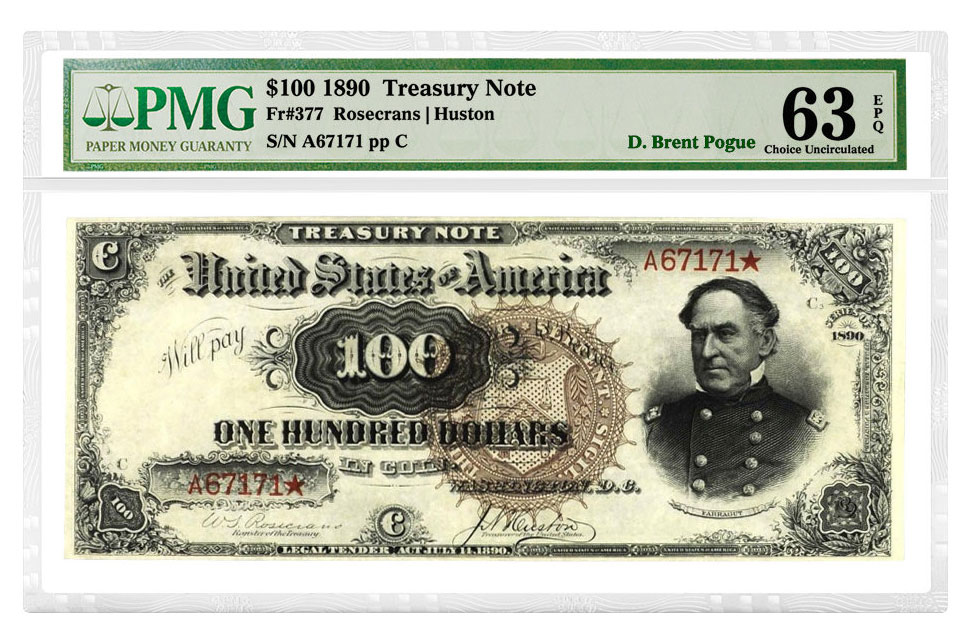 An 1890 $100 “Watermelon” Treasury Note graded PMG 63 Choice Uncirculated EPQ realized $372,000. The “Watermelon” design, Fr. 377, earned its nickname from a resemblance of its large zeros on its back. This example is the finest graded by PMG. In fact, it is the only example certified by PMG in any uncirculated grade. That result was closely followed by an 1891 $50 Treasury Note, Fr. 376, graded PMG 64 Choice Uncirculated EPQ, which realized $360,000. Only 80,000 of the one-year type note were printed, with only 23,500 of them issued. Just 22 are known, with only 15 available to collectors. This example is the second-finest known.

The second note realizing $300,000 was an 1875 $100 National Bank Note, Fr. 462, graded PMG 55 About Uncirculated. This note is Serial Number 1 and is the lone example known of this Friedberg number, which has the Rosecrans-Huston signature combination.

Other top results from the monumental sale include:


All of the prices realized include a 20% buyer’s premium.

About Paper Money Guaranty® (PMG®)
Founded in 2005, PMG is the world’s largest and most trusted third-party paper money grading service, with more than 4.5 million banknotes certified. PMG has established the industry’s highest standards of accuracy, consistency and integrity. Every note that PMG certifies is backed by the comprehensive PMG Guarantee of authenticity and grade, which gives buyers greater confidence. This results in higher prices realized and greater liquidity for PMG-certified notes. To learn more, visit PMGnotes.com
© 2020 Paper Money Guaranty. All rights reserved.