Two PMG-certified banknotes from India and another from Zanzibar led the results of a Spink auction of world banknotes held April 17-18 in London. In all, eight of the 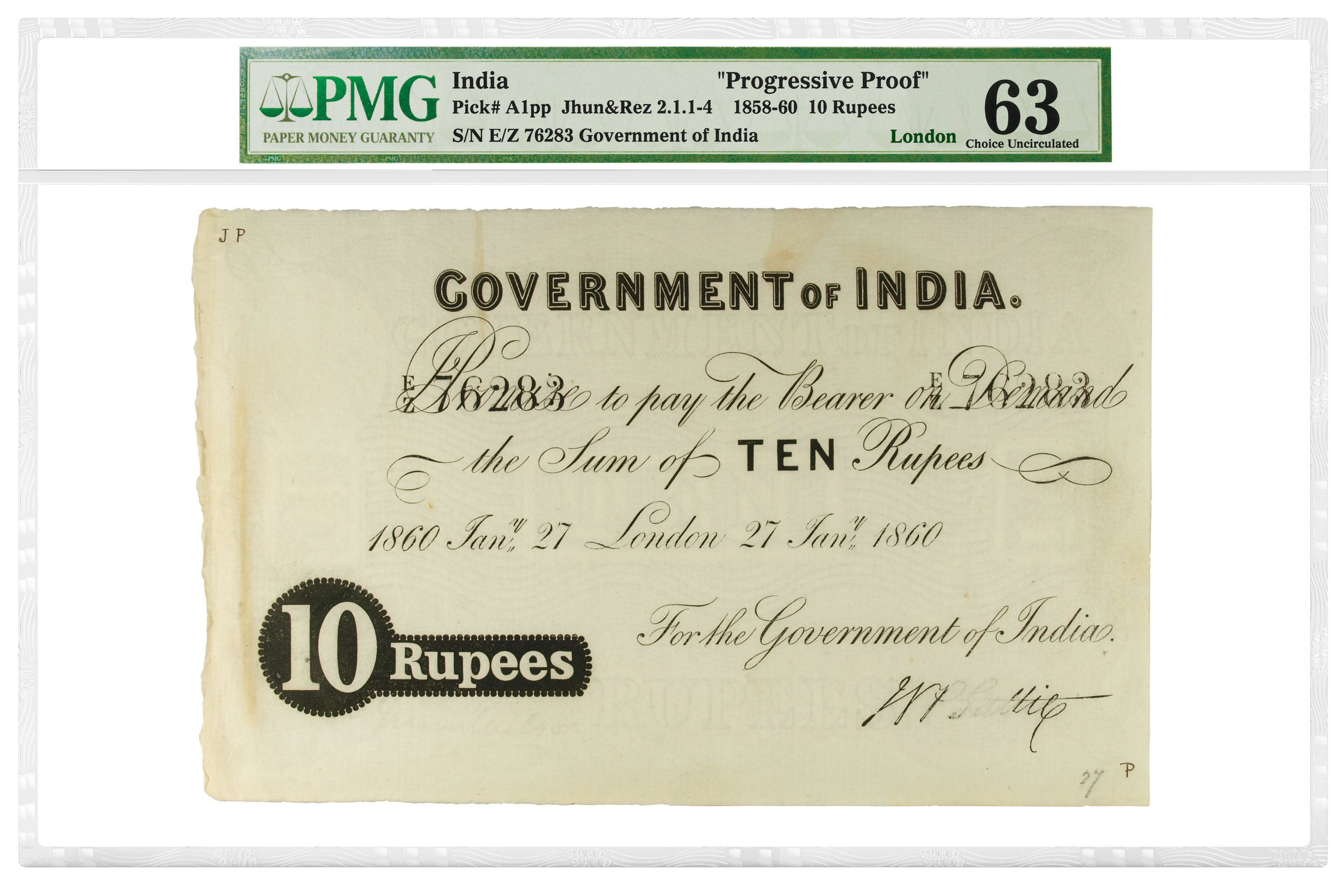 Two PMG-certified banknotes from India and another from Zanzibar led the results of a Spink auction of world banknotes held April 17-18 in London. In all, eight of the top 10 lots were certified by PMG.

The top lot was an India 1858-60 10 rupees Progressive Proof, which dates from a time of transition in India when power was shifting from the East India Company to direct British rule. Graded PMG63 Choice Uncirculated, the proof realized an astounding £100,800 (about $131,000 USD), more than 20 times its pre-auction estimate.

“Certification by PMG gives bidders more comfort when bidding on the world’s greatest paper money rarities,” said Barnaby Faull, director of banknotes for Spink, a global auction house founded in London in 1666. “Their trust in the expertise and integrity of PMG’s grading team has been once again reflected in auction results.”

A Burma undated (1937) 100 rupees – Rangoon, graded PMG 25 Very Fine that realized £21,000 (about $27,000 USD) and an India undated (1928) 1000 rupees – Bombay, graded PMG35 Choice Very Fine that realized £19,200 (about $25,000 USD) were the top lots from the section of this auction dedicated to the Dauer Collection of British India Banknotes. An image gallery of PMG-certified notes offered in this portion of the auction can be viewed at PMGnotes.com/dauer-india.

A Cameroon undated (1961) 5000 Francs, graded PMG63 Choice Uncirculated EPQ that realized £12,000 (about $15,000 USD) was the top lot of the Michel Muszynski Collection of Sub-Saharan African notes portion of this auction. Another prized note from this vibrant collection is an undated (1962) Cameroon 1000 francs, graded PMG65 Gem Uncirculated EPQ, that realized £2,520 (about $3,000 USD). An image gallery of the PMG-certified notes offered in this part of the auction can be viewed at PMGnotes.com/africa.

Other highlights from the sale include:

Meanwhile, a separate Spink auction was held on April 17 for part one of the Ibrahim Salem Collection of British Commonwealth Banknotes. In that sale, the top 20 lots were all certified by PMG, led by a Gibraltar 1914 Five Pounds = Five Libras, an emergency World War I issue. Graded PMG20 Very Fine NET, it realized £27,600 (about $36,000 USD).

In addition, an undated (1934) Fiji £20 Color Trial Specimen, graded PMG66 Gem Uncirculated EPQ, realized £13,200 (about $17,000 USD). Notes that PMG graded for this auction can be viewed in an image gallery at PMGnotes.com/salem