What would the friendship between states be if it was not lived by people? Ulrich Künker, managing director of Künker, has been a good friend of Michael Hans Chou, owner of Champion Leilo Co., Hong Kong, for years.

Their personal relationship inspired the two of them to erect a numismatic monument to the friendship of the nations. And so the idea of a set of two panda medals was born.

Both medals feature the same motif on their obverse. The reverses have a different design: for China by Yu Min, for Germany by Heinz Hpyer and Sneschana Russewa-Hoyer. The Staatliche Münze Berlin was won over to strike the German medal. This pair of pandas has become a symbol for China, the Berlin Bear they face is much less popular. With the Chinese Embassy of the People’s Republic of China in the Federal Republic of Germany’s support, the initiators received the approval of the Chinese Ministry of Culture to use the official logo of the 45th anniversary of the establishment of diplomatic relations between the People’s Republic of China and the Federal Republic of Germany for the production of the Panda medals.

Yu Min has designed more than 100 circulation and commemorative coins of the People’s Republic of China, including over 40 Panda motifs. The talented engraver is highly esteemed not only in China but throughout the world. He received the “Krause Award” for his life’s work as apart of the COTY Ceremony early in 2017. He is the first Asian designer ever to be awarded this honor. The One Yuan coin with peony flower designed by him has mintage over 10 billion.

Heinz Hoyer is also a “Krause Award” laureate. As the first German to receive it, he won it in 2016. His name is familiar to all collectors of FRG and GDR coins, for he has designed more than 20 circulation and commemorative coins. The most famous and widespread work of his are the German 1- and 2-euros circulation coins which, manufactured by the billions, are in use in the whole of Europe.

On June 30, 2017, the first-strike ceremony of the “German” medal took place in the Staatliche Münze Berlin. Dr. Andreas Schikora, head of the Berlin Mint, hosted a well-attended event. Speakers were Chinese AmbassadorShi Mingde and the Ambassador and the head of the Asia section in the Foreign Minstry of the Federal Republic of Germany Dr. Norbert Riedel who represented the German government.

When the Chinese panda couple Meng Meng and Jiao Qing was officially handed over to the Berlin Zoo on July 5, 2017, a set of Panda medals made from silver plated brass designed by Yu Min and Heinz Hoyer, distributed by the Chinese Embassy in the Federal Republic of Germany, were given to the dignitaries from both China and Germany presented at the ceremony. This version is not available for sale. However, made from 1 ounce of .999 fine silver, a set of Panda medals will be offered, in a prestigious box accompanied by a certificate. The mintage amounts to 3,000 sets.

Yu Min designed the common obverse of the medal. At the center it features the logo of the 45th anniversary of the establishment of diplomatic relations between the People’s Republic of China and the Federal Republic of Germany; in the background one can see the Brandenburg Gate and the Great Wall of China, with “Sino-German Friendship” below. 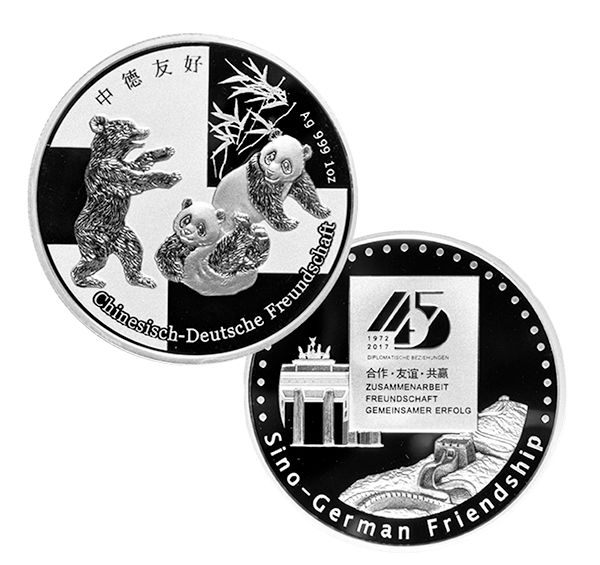 On the reverse of the Chinese version one can see a bear on the left, standing with two playing pandas turning towards him and a bamboo branch behind indicating a natural ambience. Sino-German friendship in German and Chinese characters are placed in the bottom and the top. The version designed by Yu Min is produced by New Century Mint which is one of the leading private mints in China.

The German reverse features the Berlin Bear, welcoming two pandas with a bouquet of flowers, in the background one sees Berlin landmarks. And the inscription “Chinesisch-Deutsche Freundschaft” in English, Chinese, and German. The version created by the Hoyer couple is produced by Germany’s oldest mint, the Staatliche Münze Berlin, which started operation as early as 1280. 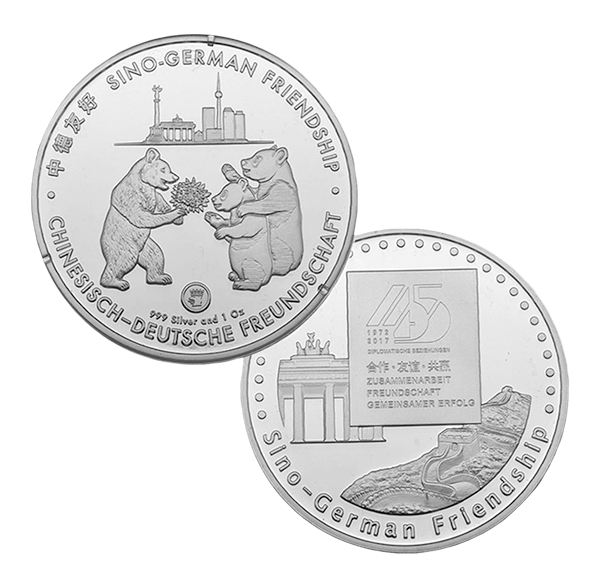