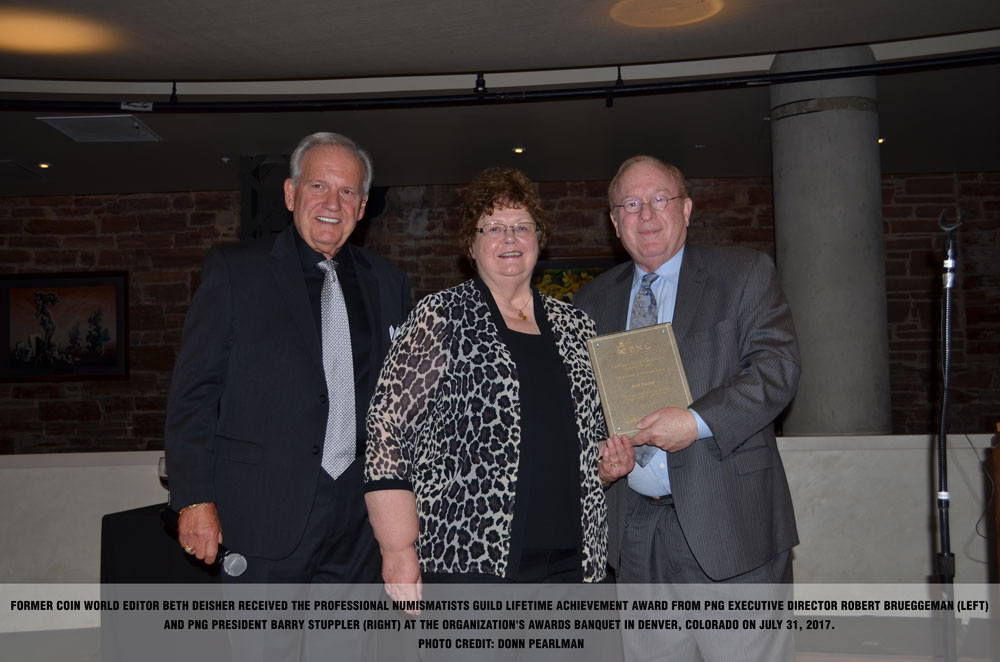 Deisher is the Anti-Counterfeiting Task Force Director of the Industry Council for Tangible Assets (www.ictaonline.org).  She was the award-winning Editor of Coin World for 27 years until her retirement in 2012. Over the years Deisher also has conducted workshops and classes on the problems of counterfeit coins produced in China.

These are the other 2017 awards and winners announced at the PNG Denver banquet.

The Robert Friedberg Award for an outstanding book or other literature was jointly presented to authors Pete Smith, Joel J. Orosz and Leonard Augsburger for their reference book, 1792: Birth of a Nation’s Coinage, published by Ivy Press.

In early 2017 while in Florida, Walker recovered and subsequently returned to their grateful owner five rare coins that had been stolen a year earlier, apparently while in transit in the United States Postal Service mail.  The coins had a combined value of about $30,000.

In a separate case, Sheriff Hutcheson, Chief Deputy Caid and Captain Morgan successfully tracked down a collector in Florida whose rare coins were stolen four decades earlier when he was a youngster in Charleston, Missouri in 1972.  During a January 2017 search of the Southeast Missouri home of a drug case suspect, the officers discovered and recovered about two-thirds of the coins stolen 45 years earlier. Through perseverance and solid detective work the officers were able to return the coins, some still housed in their familiar blue Whitman folders, to the now adult and quite surprised collector.

The Kaplan Award recognizes efforts and contributions in combatting crimes against the numismatic community, and is jointly presented by the PNG and the Lewis M. Reagan Foundation.  It is named after a former PNG President and Ohio dealer who was personally responsible for the apprehension of several people suspected of committing numismatic-related crimes.

John Maben of JFM Trading, LLC in Lakewood Ranch, Florida received the Significant Contribution Award. It is given to those who have made exceptional, beneficial efforts over the years on behalf of PNG and the profession, and added to the hobby.

PNG Legal Counsel Armen Vartian of Manhattan Beach, California, was recognized during the banquet for 25 years as a PNG Affiliate Member.