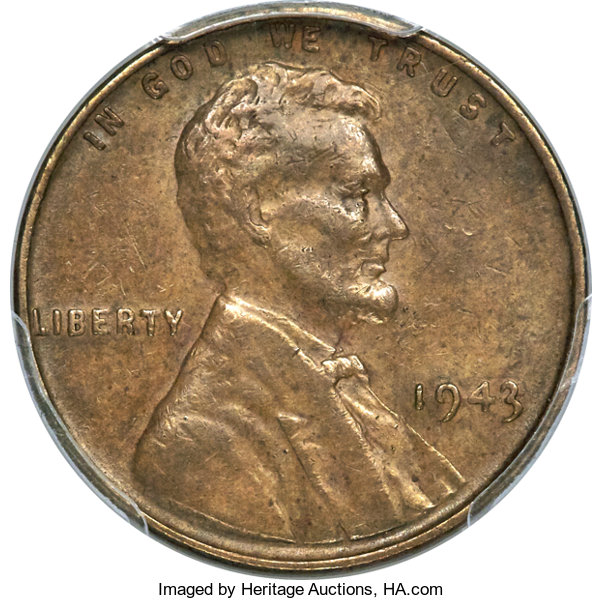 
The hugely popular copper 1943 cent was the big story as Heritage’s July 11-14 Summer FUN Signature Auction realized in excess of $5.8 million. The auction was held in Orlando in conjunction with the summer Florida United Numismatists convention. All prices include a 20% Buyer’s Premium.

In 1943, the United States Mint changed the composition of the cent from the usual 95% copper alloy to zinc-plated steel. These steel cents were made by the hundreds of millions and, despite the fact that they are much different in color than other cents, carry very little value today. However, a few older blank planchets made their way into coining presses, and the resulting 1943-dated bronze coins, technically error pieces that were struck on the wrong planchet, are highly sought-after today. This auction featured one such piece, minted in Philadelphia and graded XF45 by PCGS . Likely fewer than twenty of these Philadelphia 1943 bronze cents are known today, and this one brought its consignor a cool $186,000 hammer price.

This auction contained several high quality early half eagles, led by a 1804 piece with a Small 8 over a large 8 in the date. Graded MS63 by PCGS, this piece was exceeded in numerical grade by only four pieces at both major grading services combined. It sold for $54,000. A 1811 half eagle, graded MS64 by PCGS, is unsurpassed in numerical grade and brought $40,800.

A few of the additional highlights of this auction included: