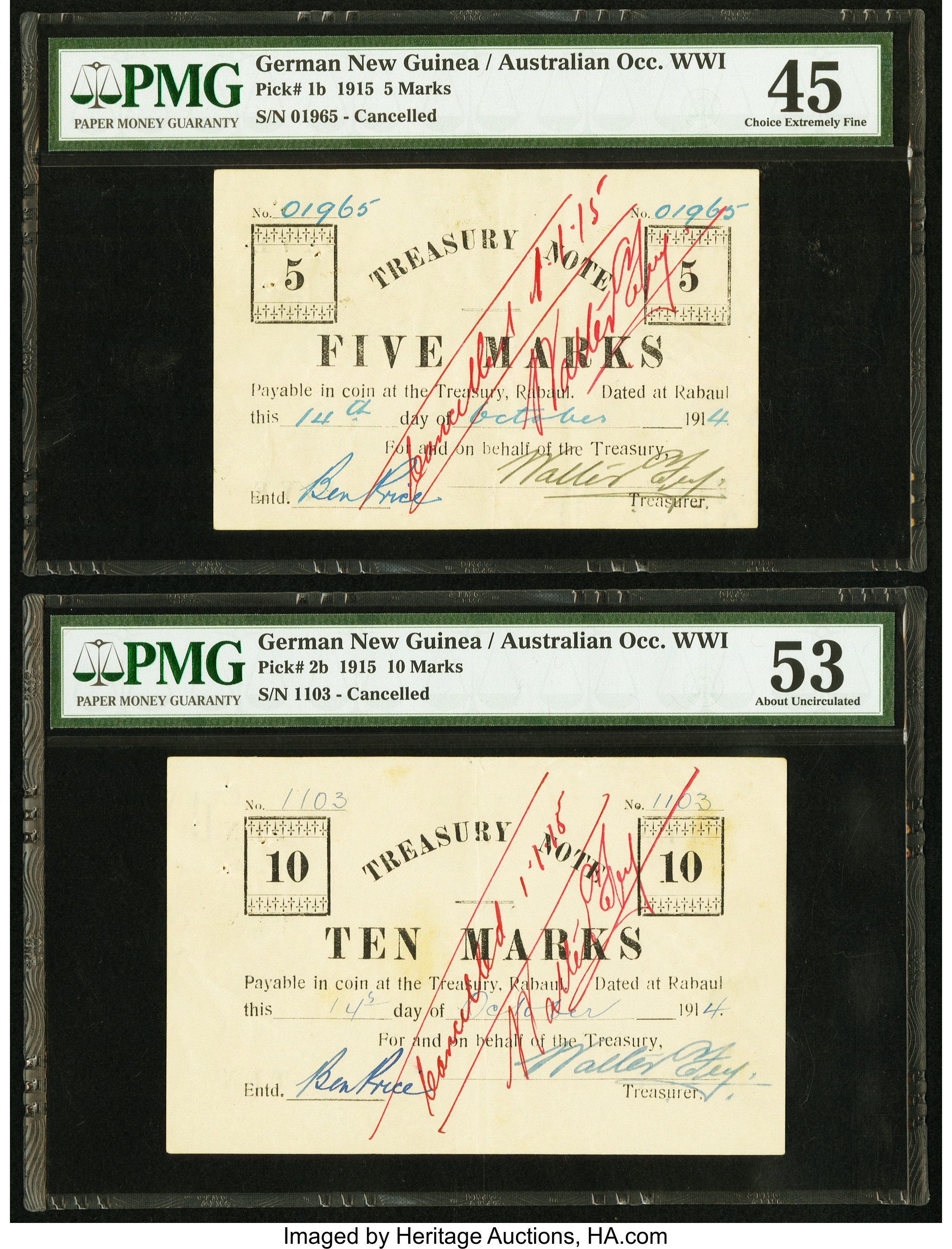 Dallas, Texas (Dec. 19, 2017) – More than 1,600 lots of World Paper Money from around the globe are expected to be among the most coveted lots presented by Heritage Auctions, the world’s largest numismatics auction house, at the FUN World Currency Auction Jan. 4-8 in Tampa, Fla.

“This event has been extremely successful for us in recent years, and we anticipate similarly strong results this year,” Heritage Auctions Currency Consignment Director Dustin Johnston said. “We have compiled an extensive collection of currency from around the world, enough to appeal to collectors of many different kinds of currency.”

A rare set of four German New Guinea Australian Occupation WWI notes (est. $200,000-240,000) very well could end up claiming top-lot honors at the event. The set includes four of the five known denominations issued, all in incredible condition compared to other known survivors. German New Guinea notes issued under Australian occupation in World War I are so scarce that it has been more than a decade since two of these denominations have been offered at auction.

A South Vietnam National Bank of Viet Nam 1000 Dong ND (1955-56) Pick 4As Specimen (est. $40,000-50,000) is easily one of South Vietnam’s most coveted designs. The French polychrome inks remain bright in this design depicting Vietnamese scenes; the Old Man and Temple design is one of the most popular engraving on all of World Paper money. All features are enhanced by the stainless French banknote paper.

A Spain Banco de Espana 500 Pesetas 1.10.1886 Pick 37 (est. $20,000-30,000) is extremely difficult to find in any grade range, much less an example at PMG Extremely Fine 40 Net. One of the rarest pieces of paper money in all of Spanish Numismatics, this early Spanish piece has been repaired, but that is overshadowed by the sheer rarity of the note. This 500 Pesetas is the only example graded by PMG.

This Pakistan State Bank of Pakistan Haj Pilgrim Issue 10 Rupees ND (1950) Pick R2 (est. $15,000-20,000) may well be the finest Haj Pilgrimage 10 Rupees note from the first Pakistani issue, and was printed for use in Saudi Arabia by Pakistan’s attending Haj. This note is rarely seen, especially in such pristine condition, which underscores the likelihood that it will be extremely popular among serious collectors.

The auction also will include a collection of rare Hawaiian notes, both in issued and proof form. Among the group’s top lots:

A Hawaii Kingdom of Hawaii $100 ND (1879) Pick 4b Remainder (est. $25,000-35,000) from the Art Davidson Collection was acquired by the consignor from a Newman auction featuring a set of proofs, $10 through $100. The final member of this Hawaiian Islands remainder set is exceedingly rare in any form. The face design is memorable and combines stellar elements from the ABN repertoire, including a globe at the center that shows the Americas. At the left is a steamer headed west and a train headed east, with palm trees in the background. Also included are images of a cow and a galloping horse. One of the auction’s most attractive notes, with blue tints not often seen on earlier American Obsolete or Federal type notes. The note was printed in 1879 – 80 years before Hawaii became a state. Davidson’s collection includes many Federal issues in the United States Currency Auction at this event, all incredible $100 notes spanning the history of U.S. currency.

A Hawaii Kingdom of Hawaii $100 ND (1879) Pick 4b (est. $15,000-25,000) is the highest denomination of the first series. This is a particularly rare example – even more so than proofs or specimens – because fewer of these high denominations were released. Because of large American business interest at the time, corporations preferred to have large sums of money in U.S. dollars. Notes did not fare well in the unforgiving climate, making notes like this one with the bright blue inks intact very rare.

Another Hawaii Department of Finance $5 1895 (1899) Pick 6p Face Proof (est. $10,000-15,000) features the classic golden design from the Series B Gold Coin issue. There was another subsequent gold coin series, but all features in that series were executed in blue. This note features outstanding intaglio embossing and underprints, as well as serial numbers made up only of zeroes and four POCs over the signature area.