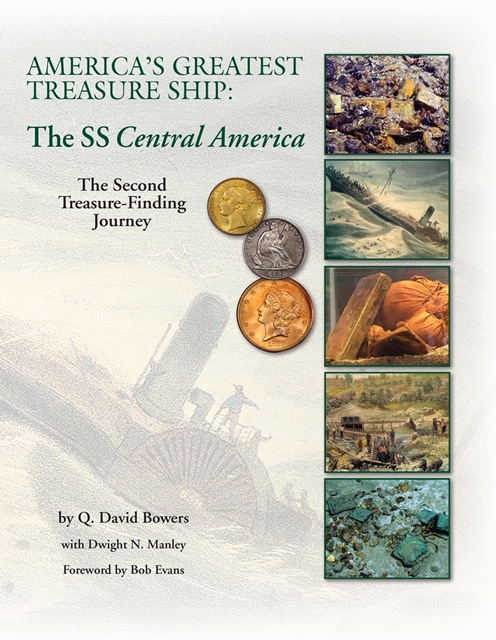 (July 29, 2019) — Never before revealed information about the greatest American treasure ever found, the tons of California Gold Rush-era coins, ingots and gold dust recovered from the 1857 sinking of the S.S. Central America, the fabled “Ship of Gold,” are revealed in an exciting new reference book written by acclaimed, award-winning rare coins researcher and writer Q. David Bowers with well-known numismatist Dwight Manley.

The new book, “America’s Greatest Treasure Ship: the S.S. Central America – the Second Treasure-Finding Journey,” publicly presents for the first time a useful and intriguing complete inventory of the more than 15,000 U.S. and world coins and 45 historic assayers’ ingots retrieved from the Atlantic Ocean during the last recovery expedition to the legendary ship in 2014. Many of these coins are among the finest known of their kind.

After sitting untouched on the ocean floor for more than a century, the treasure created a sensation when it was first discovered over 30 years ago. The amazing, initial 1980s recoveries from the S.S. Central America were described by LIFE magazine as “The Greatest Treasure Ever Found,” and the sale of the vast majority of that retrieved treasure still stands as the world’s most valuable numismatic transaction.

Bowers’ 2002 book, “A California Gold Rush History Featuring Treasure from the S.S. Central America,” quickly sold out and copies in the marketplace sell for more than the original issue price.

This latest reference is a companion book. It captures the history and romance of the Gold Rush and the fabulous first recovery, and then focuses on part two of the epic treasure find from the ocean floor, which in 2014 discovered such incredible, historic items as the ship purser’s safe filled with thousands of coins.

Readers of the new book will find fascinating revelations in the entertaining and informative Bowers’ style about these amazing sunken treasure discoveries, such as the unprecedented recovery of 1,000 ounces of California gold dust and nuggets still sealed in Old West miners’ packets (“pokes”) that had not been opened in 161 years. There also is captivating background information about the exciting California Gold Rush.

“As you read this book you are a part of history being made. Nothing like this has ever been found before!” explained Bowers, co-founder of Stack’s Bowers Galleries.

“The story of the S.S. Central America, its cargo, its lost passengers and crew and its survivors is a historic moment in American history, and the recovered items are an unprecedented time capsule of the wealth and adventure of the great California Gold Rush,” said Manley, managing partner of the California Gold Marketing Group which published the book.

The S.S. Central America was a 280-foot long, side-wheel steamship carrying tons of California gold when she sank off the coast of North Carolina in a September 1857 hurricane during a voyage from Aspinwall (now Colón), Panama to New York City. There were 578 passengers and crew on board, but only 153 survived.

The loss of the gold cargo more than 7,000 feet below surface of the Atlantic Ocean contributed to the economically devastating financial panic of 1857 in the United States that had begun in New York City in August.

The book’s foreword was written by Bob Evans, the chief scientist on the successful 1980s missions that first located and recovered a portion of the fabulous sunken treasure and who also supervised the treasure in the 2014 recovery expedition.

There are nearly 500 illustrations of Gold Rush history and numismatic importance in the new 224-page book, and many of the superb quality coin and ingot photographs are published for the first time anywhere.

Advance orders now are being taken for delivery of the book in late August. A limited number of copies will be available for purchase at the upcoming American Numismatic Association 2019 Chicago World’s Fair of Money® where Bowers, Manley and Evans will autograph books on Thursday and Friday, August 15 and 16.