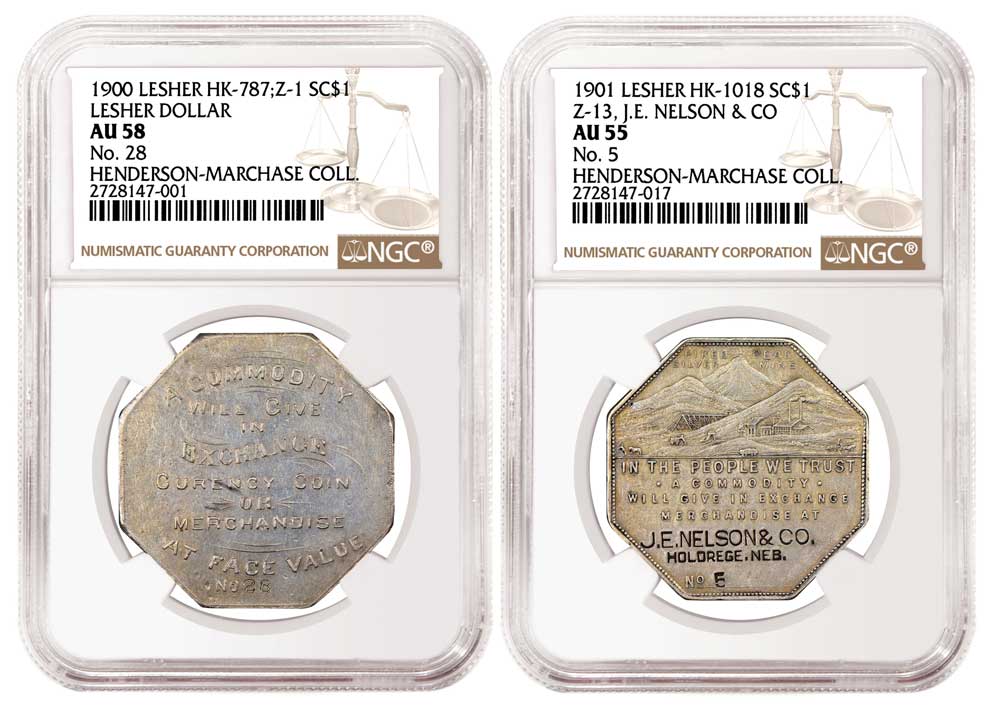 SARASOTA, FLA. (August 1, 2017) — Numismatic Guaranty Corporation® (NGC®) has certified the Henderson-Marchase Collection, the most complete set of Lesher “Referendum Dollars,” which will go on display at the American Numismatic Association (ANA) 2017 World’s Fair of Money, Aug. 1-5 in Denver, Colorado.

The silver octagonal medals were privately made in 1900 and 1901 by Joseph Lesher of Victor, Colorado. Lesher was a silver mine owner and advocate of wider use of silver, the value of which was suffering at the end of the 19th century due to federal policy. The Lesher dollars pre-date the US government’s Denver Mint, which opened in 1906.

Lesher struck the first 100 medals with little more than words and a unique serial number. From this group, the Henderson-Marchase Collection has serial number 28, which is attributed by NGC as HK-787 (following the Hibler-Kappen “So-Called Dollars” catalog number) and graded NGC AU 58.

Lesher next partnered with local grocer A.B. Bumstead, who sold several hundred of the medals marked “A.B. BUMSTEAD” on the obverse, underneath a striking image of the nearby Pike’s Peak Silver Mine, which is found on most Lesher dollars.

The 1901 varieties saw the face value of the medal drop from $1.25 to $1, along with a slight drop in weight and size. Nearly all these varieties were stamped or engraved with other businesses’ names—including one as far away as Holdrege, Nebraska—where the medals promised they could be exchanged for merchandise.

There are 13 varieties of these 1901 medals, with four of these varieties each having a version with no serial number—making for 17 possible variations. The Henderson-Marchase Collection includes 15 of these 17 variations, including a Holdrege specimen (attributed as HK-1018 and graded NGC AU 55).

By making the medals, Lesher was skirting US laws against private coinage. The term “referendum” meant that the public had to decide on their own whether to accept them. In fact, the five varieties of the 1900 medals are marked as having 1 ounce of silver and a face value of $1.25, even though silver was only worth about half of that amount at the time.

No more than 3,500 Lesher dollars are believed to have been minted, and they are especially appealing to Colorado numismatists. The historic mining community of Victor and nearby Cripple Creek are 50 miles south of Denver and just to the west of Colorado Springs, which is where the ANA is based.

The medals were previously owned by William C. Henderson, a longtime ANA treasurer and mayor of Colorado Springs, who was instrumental in convincing the ANA to locate their headquarters there.

The set was submitted to NGC by Christopher Marchase, Henderson’s grandson. According to Marchase: “I selected NGC because they are the leader in coin and medal certification, and because the NGC holder would protect and enhance the presentation of the Lesher dollars.”

“Rick Montgomery, the president of NGC, also knew my grandfather from the days when they both worked at the ANA,” Marchase added. “That personal connection meant a lot to me.”

Montgomery also recalled that particular connection with the medals: “I remember fondly listening to his grandfather speak of these and other Lesher treasures at various Colorado Springs coin club meetings in the early to mid-1980s.”

The NGC-certified Henderson-Marchase Collection of 20 medals—which includes 17 of the 18 varieties—will join dozens of other Lesher dollars on display at table 439 of the ANA show in Denver from Aug. 1-5.

The collection, which is the top-ranked Lesher set in the NGC Registry, can also be viewed on the NGC website at NGCcoin.com/Lesher.