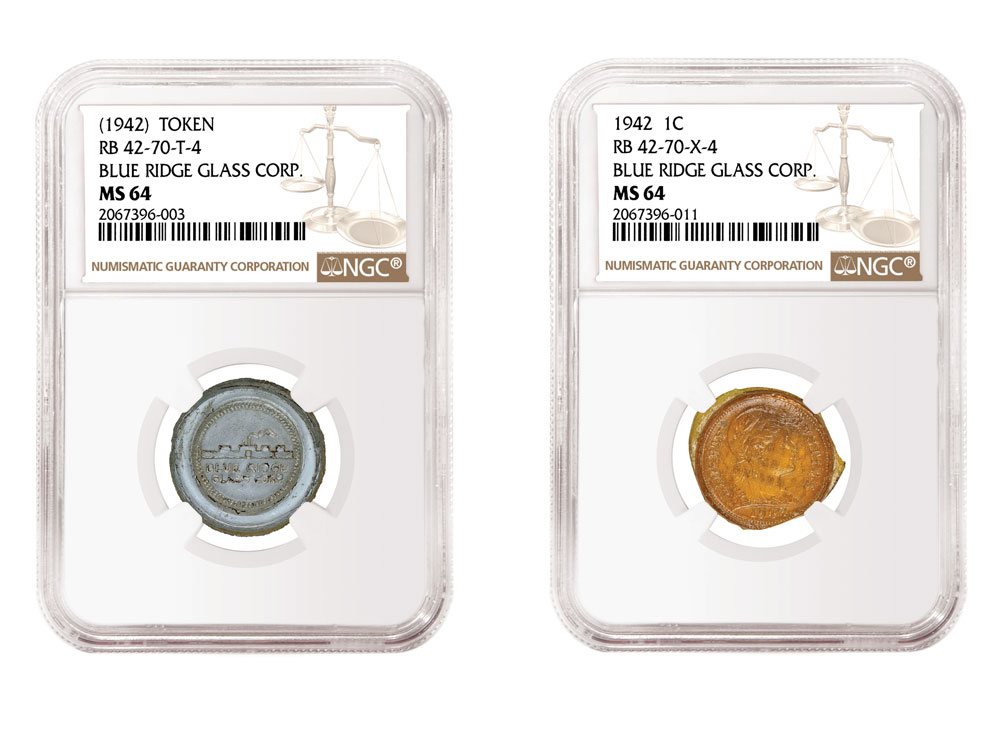 SARASOTA, FLA. (July 24, 2017) — Numismatic Guaranty Corporation® (NGC®) has certified 17 experimental cents and tokens struck in glass during World War II to test the unusual composition for coinage. Images of these rare pieces can be viewed at NGCcoin.com/GlassCents

With copper needed for the war effort, the US Mint experimented in 1942 with a variety of alternative materials for cents. Pattern (or test) cents were struck in bronze, brass, zinc, zinc-coated steel, manganese, white metal, aluminum, lead, rubber, fiber, plastic and even glass. Ultimately, zinc-coated steel was selected for 1943 cents.

The glass patterns were struck by Blue Ridge Glass Corporation of Kingsport, Tennessee, using blanks supplied by Corning Glass Works and dies prepared by US Mint engraver John Sinnock. The 1942-dated obverse was based on the then-circulating Columbia Two Centavos while the reverse featured a design proposed by Anthony Paquet in the 19th century.

The group certified by NGC includes nine of these pattern glass cents, of which seven are intact and two are fragments. All are struck on amber-colored glass blanks. The grades of the intact specimens range from NGC MS 62 to NGC MS 64 while the fragmented pieces were attributed but not graded. Numismatists were previously aware of just two Blue Ridge glass pattern cents, one of which was a fragment.

Also certified by NGC are eight glass tokens struck at the same time as the glass cents by the Blue Ridge Glass Corporation. Three of these tokens were struck with a die depicting the factory with the text of BLUE RIDGE GLASS CORP. above. The others feature more modest design elements. The tokens have been graded MS 64 to MS 66 by NGC except for two that are fragmented.

The fragmented pieces reveal the reason glass coins were not practical for circulation—they would break too easily. Roger W. Burdette, author of the book United States Pattern and Experimental Pieces of World War II, noted that Blue Ridge Glass had some employees carry glass blanks in their pockets, but those blanks chipped, creating sharp edges.

These experimental glass pieces have been cataloged by Burdette and will appear in the next edition of his book. NGC used Burdette’s catalog numbers on its certification labels.

The 17 experimental glass cents and tokens recently certified by NGC will be sold by Heritage Auctions on August 4, 2017, at the ANA World’s Fair of Money in Denver. To view the sale, visit HA.com/1258

NGC has posted an image gallery of these rare and unusual experimental pieces. View them at NGCcoin.com/GlassCents