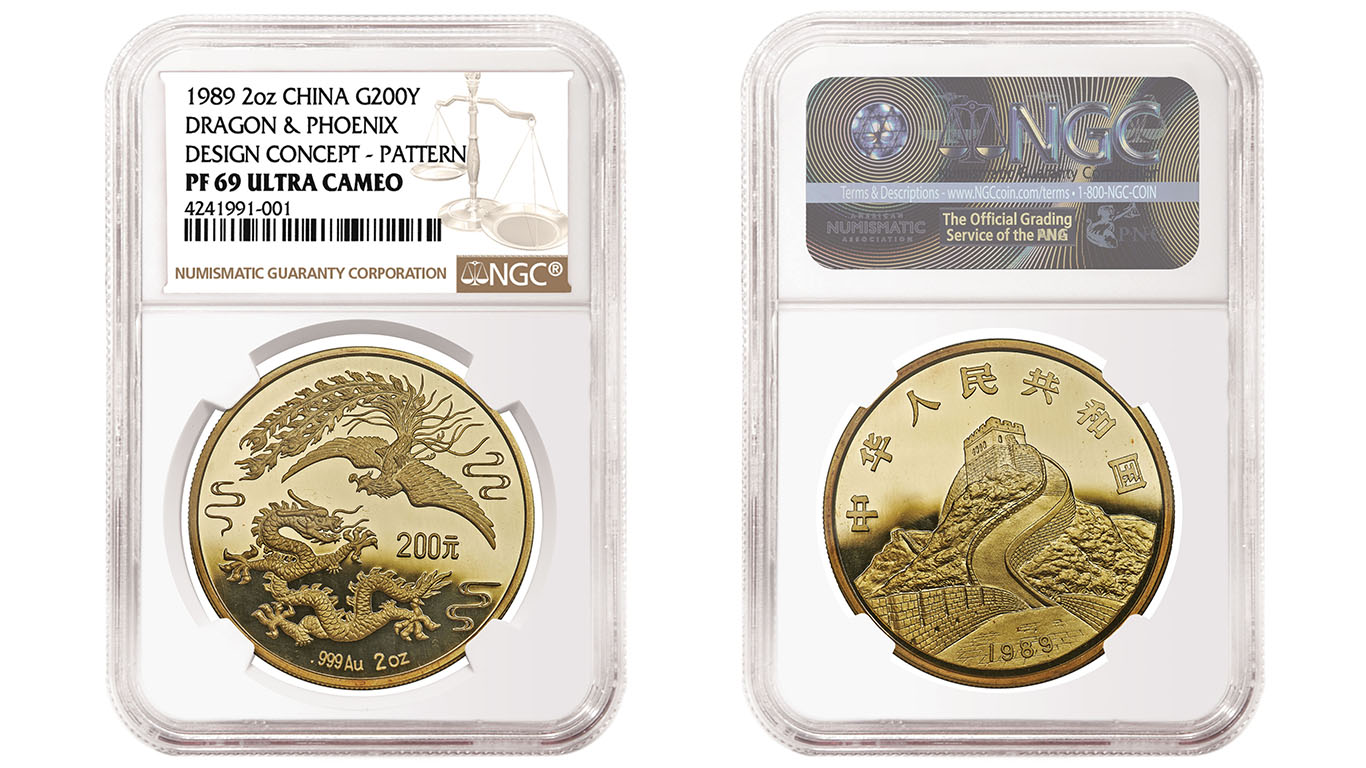 The extremely rare 1989 Dragon & Phoenix Pattern Gold 200 Yuan, graded NGC PF 69 Ultra Cameo, realized an astonishing $408,000. The coin features the Great Wall on the obverse, and a dragon and a phoenix on the reverse. It is struck in two ounces of .999 fine gold and is 40 mm in diameter.

Patterns struck with a 1989 date exist for all four coins, and are all extremely rare. Only three are known for the 1989 Gold 200 Yuan, which is considered the most valuable, according to the “Gold & Silver Coins of China Standard Catalogue,” by King Chan, Leo Wang and Jerry Lin. (Chan and Wang are NGC consultants, and Lin is an NGC grader.)

The second-highest price realized in the Heritage Hong Kong sale was a vintage coin, also certified by NGC, that realized $240,000. The 1897 Kiangnan L&M-210 Plain Edge Proof Dollar, graded NGC PF 65, features a superb strike, and is one of only two plain edge patterns certified by NGC.

The NGC Chinese highlights continued with a 1907 Gold L&M-1024 Small Clouds Tael, graded NGC MS 63, that sold for $150,000. This coin is encapsulated with the NGC Red Dragon label, indicating that it was evaluated by the NGC Advanced Chinese Authentication Bureau (ACAB).

“NGC continues to play a critical part in developing the numismatic markets in Asia and adding value to our consignors and bidders worldwide,” said Cristiano Bierrenbach, Executive Vice President of International Numismatics for Heritage Auctions. “The rare Dragon and Phoenix gold pattern of 1989 is a good example as an identical, uncertified specimen sold recently in Switzerland for $125,000. Our NGC-certified piece realized more than triple that amount.”

The Heritage auction was held in conjunction with the Hong Kong International Numismatic Fair, which ended Dec. 10.