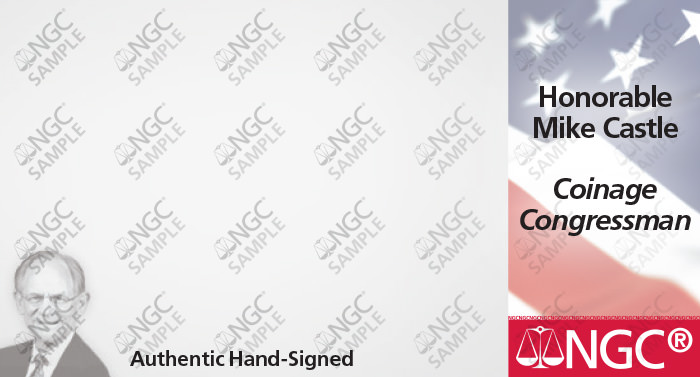 SARASOTA, FLA. (June 23, 2016) — Numismatic Guaranty Corporation® (NGC®) and Heritage Auctions have announced that the Honorable Mike Castle has agreed to hand-sign NGC labels exclusively for the companies. Castle, a former Governor of Delaware and longtime member of the US House of Representatives, is directly responsible for some of the most important and popular modern US coins.

While in Congress, Castle wrote and/or sponsored the bills that created the 50 State Quarters® Program, the Sacagawea Dollar, the Presidential Dollar Series, the American Platinum Eagle, the America the Beautiful Quarters® Program and a number of modern commemoratives.

The impact of the 50 State Quarters in particular can hardly be overstated. It is estimated that 150 million Americans—half of the country’s population at the time—became casual coin collectors as a result of this series. Many would become more serious modern coin collectors, which had a transformative effect on the hobby and propelled modern coin collecting into the juggernaut that it is today.

The 50 State Quarters series started in 1999 with Delaware, the first state admitted into the Union and Castle’s home state. By the time the Delaware Quarter was released, however, Castle had already begun to leave his mark on US coinage.

The first numismatic legislation that Castle sponsored was the Commemorative Coin Authorization and Reform Act of 1995, which created the American Platinum Eagle bullion coin.

In his last piece of numismatic legislation, Castle created the America the Beautiful Quarters Program to begin after the conclusion of the 50 State Quarters Program. Significantly, this act called for the creation of a five ounce silver bullion coin, the largest silver coin ever created by the US Mint.

“Mike Castle has done more than any other person in the last 25 years to shape United States coins,” says Steven R. Eichenbaum, CEO of NGC.

With a legacy that extends to circulating coins, bullion coins, commemorative coins and numismatic issues, Mike Castle truly is the Coinage Congressman.

“I am excited to continue my involvement in coins and the collecting community with NGC,” says Castle. “This innovative program is yet another way for new people to be introduced to this great hobby.”

About Numismatic Guaranty Corporation® (NGC®)
NGC, the world’s largest and most respected third-party coin grading service, was founded in 1987. From the beginning, NGC has committed itself to developing an impartial, trusted standard of consistent and accurate grading. To uphold this commitment, NGC’s full-time grading professionals are no longer active in the commercial coin marketplace, and are prohibited from buying or selling coins to ensure impartiality. As NGC has grown to become the leader in third-party grading services, we have maintained a steadfast and uncompromising commitment to this standard. Learn more at NGCcoin.com.

About Heritage Auctions
Heritage Auctions is the world’s largest rare coin dealer, and the largest auction house founded in the United States, with annual sales approaching $900 million, and over 950,000 online bidder members. For more information about Heritage Auctions, and to register and receive access to a complete record of our past prices realized, with full-color, enlargeable photos of each lot, please visit HA.com.