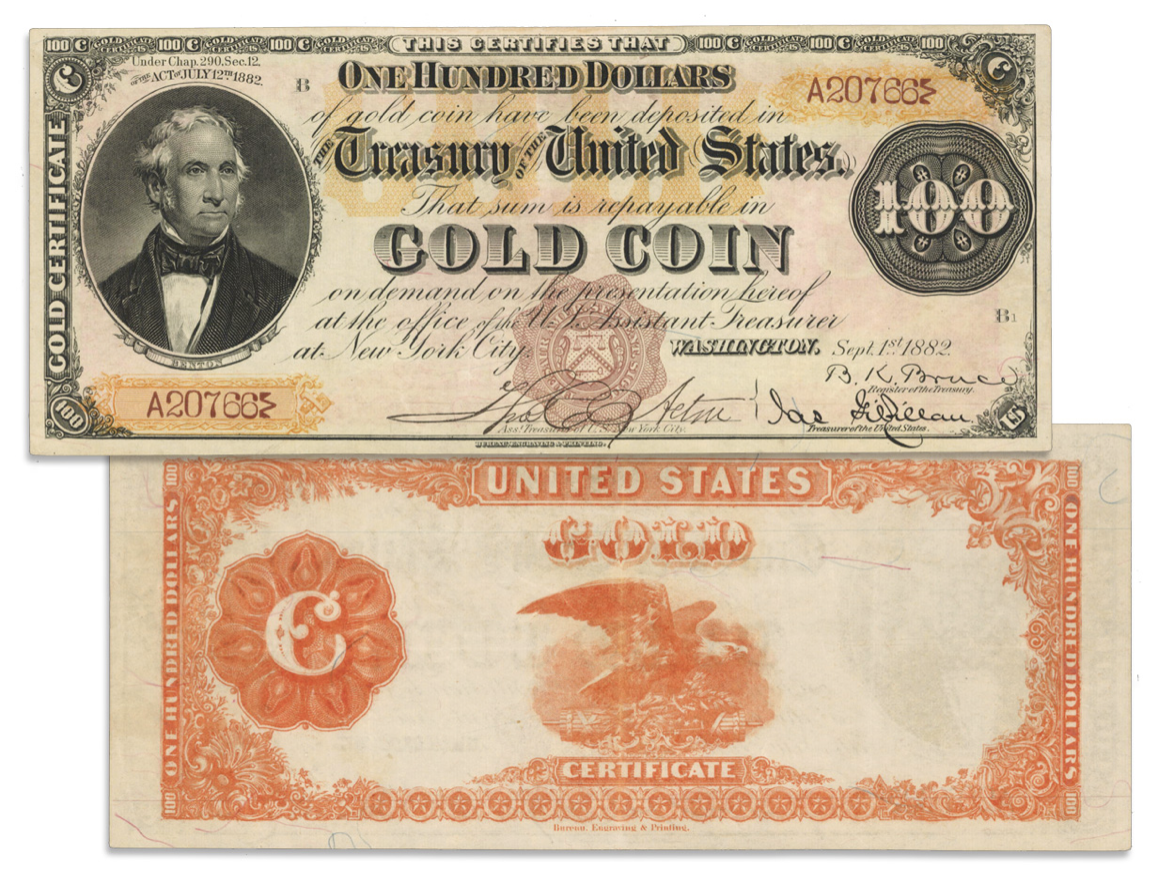 
Santa Ana, CA – An incredible Gold Certificate rarity, this “Triple Signature” 1882 Gold Certificate is one of just three pieces extant and the only such note remaining in private hands. The face of this note has the portrait of Missouri Senator Thomas Hart Benton (nicknamed “Old Bullion”) to the left and the denomination in two conjoined rosettes at right. Gold overprints include “GOLD” at the top center and backgrounds to the serial numbers. The back is printed in a rich orange-gold and has an eagle at the center. After December 17, 1878, gold coins and paper currency were exchangeable at par in general commerce. Accordingly, these are the first of the Gold Certificates that saw wide use. The engraved signatures of Treasury officials Bruce and Gilfillan are stacked in the lower right corner. To their left is the large engraved signature of Thomas Acton, Assistant U.S. Treasurer at New York. In fact, these notes were payable at the office of the Assistant U.S. Treasurer there.

A large brown scalloped Treasury Seal is at bottom center, while the serial numbers, also in brown, are at the bottom left and top right. This riveting Gold Certificate exhibits just the lightest signs of circulation while displaying vividly printed inks and bright well margined paper. The orange-gold back is brilliantly colored and free from fading. The grading service makes mention of “Minor Edge Restorations” on the holder but those are minor in scope, skillfully executed and very difficult to detect. The note has long been recorded in census records as Choice About Uncirculated and while the eye appeal certainly suggests that, fold count requires a technical grade a bit lower. That said this is the only example of the catalog number available to the collecting community. The other two notes known reside in the collections of the Federal Reserve Banks of New York and San Francisco. This is another exceptional rarity that can trace its pedigree back to the legendary collection of Albert A. Grinnell. It last traded publicly for $822,500 in a January 2014 auction. It is no less rare now than it was then. However demand for ultra-rarities such as this has only increased.