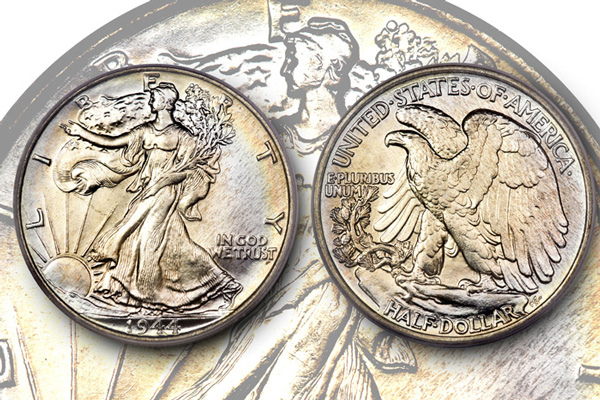 The Walking Liberty half dollar

The Walking Liberty half dollar

Weinman's classic design of Lady Liberty striding toward the sunrise on the obverse and a majestic American Bald Eagle on the reverse has made this one of the United States' most beautiful coins. The obverse design would later be adopted in 1986 to grace the obverse of the one-dollar Silver Eagle bullion coins. The beauty of this coin has also helped it to become a popular series to collect amongst coin collectors.

If you are assembling a basic type set collection of United States coins, any uncirculated coin from 1940 through 1947 will be a great addition to your collection. Circulated specimens in this date range can be obtained for slightly over bullion value.

Another alternative is to assemble a collection that consists of one coin from each date without regard to the mint mark. The beginning collector may want to assemble a "short" date set of circulated coins from 1933 to 1947. This would consist of a total of 15 circulated coins at a reasonable cost. The intermediate coin collector could choose to pursue a complete year set from 1916 until 1947 that would total 25 coins.

To maximize your value and stretch your budget, choose the lowest-priced coin from each year. For example, the 1916-D is cheaper than the 1916 and the 1916-S. An advanced collector can assemble a complete uncirculated year set for around $25,000. For example, if you want to avoid the higher-priced uncirculated coins from 1916 through 1933, you can assemble a short set of 14 uncirculated coins from 1934 through 1947 (14 coins) for about $1,000.

A collection of Walking Liberty half dollars representing one specimen from each date and mint (date set) consists of 63 coins. Including both obverse and reverse mint marked specimens of the 1917 Denver and San Francisco minted coins would bring the total to 65 coins. An intermediate collector will assemble a circulated year set given the higher prices of the 1916-S, the 1919 dated coins, and the 1921 dated coins. An advanced collector with a large budget will pursue an uncirculated date set that may take years to assemble and cost close to $120,000.

Finally, when the beginning collector has progressed into an intermediate collector, they will take the next step and assemble the "early set" ranging from 1916 to 1933 (26 coins). The early set will also require an expanded budget to take into account the key dates included in this set.

Proof coins were produced at the Philadelphia Mint from 1936 until 1942 for a total of seven coins. The 1936 proof coin runs well into the thousands of dollars while the remaining proof Walking Liberty half dollars range from a few hundred dollars to about a thousand dollars. Therefore, the complete seven coin set in PR67 will cost approximately $18,000.