All told, a record 10 lots across the three events topped $1 million.

The top lot, one of three unique coins offered in the auction, was one of six coins to crack the million-dollar plateau in the FUN U.S. Coins event; the most seven-figure coins in a FUN auction was seven, a standard Heritage achieved twice: in 2015 and again in 2022. The 1873-CC No Arrows Seated Dime’s result nearly doubled its previous record of $1.84 million.

“ Year after year, Heritage’s FUN auctions reaffirms its status at the premier destination for elite collections and sets the tone for the next six months or so,” says Todd Imhof, Executive Vice President at Heritage Auctions, “and I am excited to announce that based upon the results we delivered for our consignors, the state of the numismatic market remains vibrant.”

The 1873-CC No Arrows Seated dime, from the Prestwick Collection, Part II, is one of the most prestigious coins ever offered through Heritage Auctions. It bears the Carson City mintmark, which appears on some of the most collected coins in U.S. numismatics. From the 12,400 1873 No Arrows dimes that were struck, Mint Director Henry F. Rice took five examples and sent them — along with required quantities of the Seated half dollars and Seated dollars — to the Philadelphia Mint for testing in compliance with the Assay Commission statute. Shortly thereafter, the Coinage Act of 1873 required that all “old style” No Arrows dimes had to be melted. It is unclear what happened to the Assay Commission Coins, but what is clear is that just one example survives today — the coin offered in this auction.

Although not the most expensive lot, perhaps more impressive was an 1870-S Seated Liberty Half Dime, MS64 , which prompted more than six dozen bids before it closed at $3.12 million, smashing the previous record, set in 2005, of $661,250. This extraordinary coin is from the Bender Family Collection, and its existence was completely unknown for more than a century.

Two half dollars – the finest known example of a 1794 Flowing Hair Half Dollar, MS64+ and a 1796 16 Stars Half Dollar, Resplendent MS66 – ended at $1.8 million. From the Jim O’Neal Collection of U.S. Half Dollar Types, the 1794 Flowing Hair Half Dollar erased the previous record of $252,000 set in 2017. 1794 marked the first year of what was arguably the country’s most important silver denomination, and also was important in its role as part of the official inauguration of Robert Scot’s two-year Flowing Hair type, as well as a highly visible “coming out” for the Mint’s implementation of required coinage under The Mint Act of 1792. The 1796 16 Stars half dollar, among the finest of all Draped Bust, Small Eagle Halves, is the scarcer O-102 (T-2)16 Stars type and took down the previous record of $822,500.

Another possibly unique offering in the auction was a 1907 Arabic Numerals Double Eagle, PR68 that brought in a winning bid of $1.68 million; the previous auction record was $920,000. One of the Important Selections from The Bob R. Simpson Collection, Part X, it made its first appearance at auction in the last 17 years. This example represents the Small Edge Lettering variety.

The sixth lot to reach seven figures, also from the Jim O'Neal Collection of U.S. Half Dollar Types, was a 1797 Half Dollar, O-101a, Magnificent MS65+ , which ended at $1.56 million. Once a part of the Norweb Collection, this coin is from a two-year design type (featuring the dates 1796 or 1797) that comes from a minuscule mintage of 3,918 pieces, making it the rarest two-year regular silver type, eagerly pursued by type collectors and early half dollar specialists alike.

Currency
Anchoring the FUN currency event was the collection of Dr. Paul Balter, whose trove of exceptional notes claimed most of the top results in the auction. 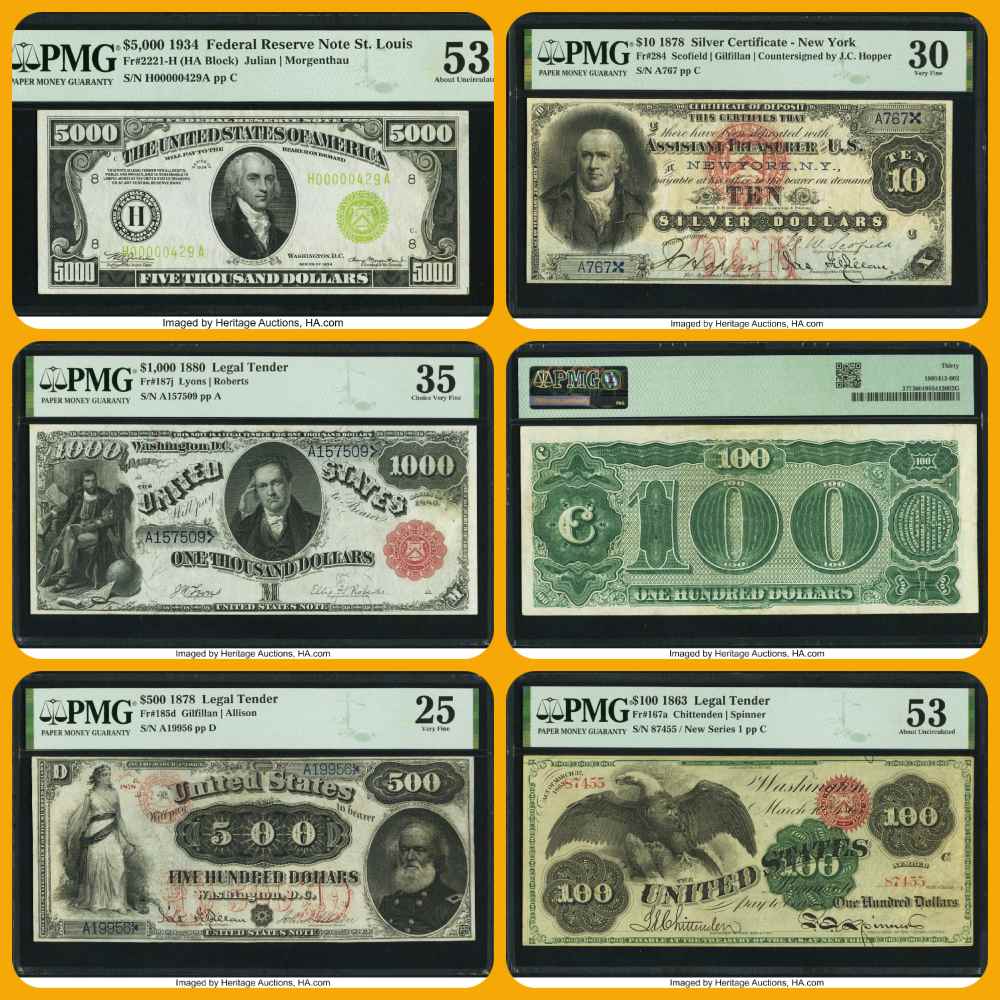 “Dr. Balter assembled an extraordinary collection of the finest United States Type and National Banknotes,” says Dustin Johnston, Vice President of Numismatics at Heritage Auctions. “His collection ranks as one of the best overall banknote offerings at public auction in the last two decades. The top ten lots were from the Balter Collection, partly because so many of the notes were once-in-a-generation or once-in-a-lifetime offerings.”

A Fr. 187j $1,000 1880 Legal Tender PMG Choice Very Fine 35 , from the Dr. Paul Balter Collection, finished atop the currency event when it sold for $360,000. Bearing a vignette of Columbus in His Study and a portrait of former New York governor and New York City mayor DeWitt Clinton, this note has eluded the collecting community since a 1993 auction in which this very pretty note was simply called a raw Very Fine. Track & Price lists 14 different serial numbers for this Friedberg number with only one piece part of an institutional collection; only seven of those 14 Fr. 187j notes have appeared at auction in the past 25 years.

From the same collection, a Fr. 377 $100 1890 Treasury Note PMG Very Fine 30 more than doubled its pre-auction estimate when it closed at $336,000. This is one of just 35 examples recorded in the census of the popular note that is referred to as the “Watermelon Note” – a nickname earned because of the large engraved digits on the back.

A Fr. 2221-H $5,000 1934 Federal Reserve Note. PMG About Uncirculated 53 that, according to Track & Price, is one of just seven examples for the St. Louis district enumerated in the census, climbed to $204,000. United States Treasury Department figures show a total of 342 $5,000 Small Size notes are still unredeemed, but far fewer than that are known in currency circles.

Also reaching $204,000 was a Fr. 167a $100 1863 Legal Tender PMG About Uncirculated 53 . The Track & Price Census population for Fr. 167a is only 23 serial numbers, but five of those have found their way into the collections of the Smithsonian Institution (two), the ANA Museum (one), and one each in the collections of the Federal Reserve Banks of Chicago and Kansas City. That leaves just 18 examples available to collectors. Of the 11 examples of this Friedberg number examined by PMG, this example received the fourth-highest grade.