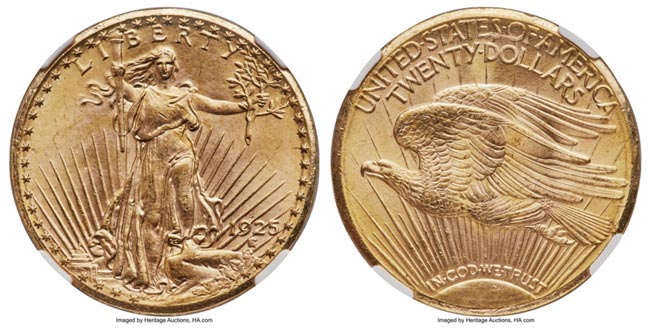 St. Gaudens Double Eagles from the 1920s are generally very common, until you start talking about some of the mintmarked issues.


St. Gaudens Double Eagles from the 1920s are generally very common, until you start talking about some of the mintmarked issues. Unlike their Philadelphia cousins that are widely available, some of the Denver and San Francisco issues of 1920s $20 gold pieces are downright difficult to locate.

The 1925-S is one such example. While 3,776,500 pieces were supposedly minted, only a small fraction of this total actually escaped the US Mint and became available to collectors. Most of these coins were melted early on, and even more were lost to the sands of time or to FDR's gold recall after 1933. While the original mintage quantity might have appeared significant on paper, there are actually very few of these coins for collectors to fight over roughly 90 years later!

Heritage will be offering an elusive NGC MS65 example in Sale 1334. This is a major condition rarity and is one of the finest-graded examples. These pieces appear infrequently for auction, often once every 5 years or so. Similar coins have sold for six figures. Don't miss your chance to place a bid for your date set or registry set!
https://coins.ha.com/itm/saint-gaudens-double-eagles/double-eagles/1925-s-20-ms65-ngc-pcgs-9182-/p/1334-19008.s?ic4=GalleryView-Thumbnail-071515