See Space-Flown Armstrong Items at the World's Fair of Money 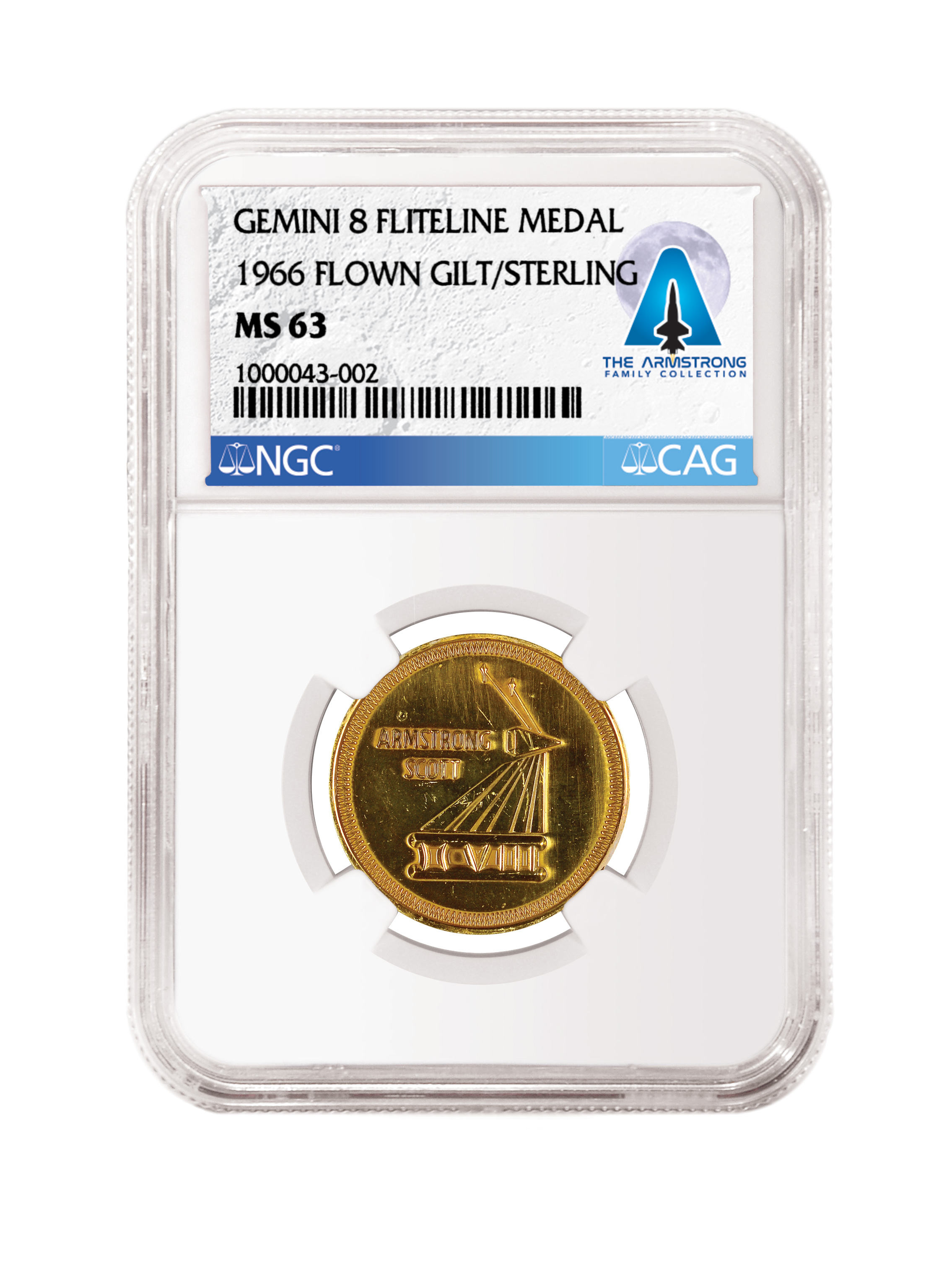 See Space-Flown Armstrong Items at the World's Fair of Money

The exhibit at the NGC booth includes Apollo 11 Robbins Medals, which show an early version of the design eventually used on the Eisenhower dollar. Collectibles Authen


The exhibit at the NGC booth includes Apollo 11 Robbins Medals, which show an early version of the design eventually used on the Eisenhower dollar.

Collectibles Authentication Guaranty (CAG) will present selections from the Armstrong Family Collection at the American Numismatic Association’s World’s Fair of Money, which is being held Aug. 14-18 in Philadelphia. CAG is an independent affiliate of Numismatic Guaranty Corporation (NGC) and Paper Money Guaranty (PMG), which are well-known and respected within the numismatic community for their expert coin and paper money certification services, respectively.

The incredible Armstrong Family Collection includes thousands of historic artifacts saved by astronaut Neil Armstrong and his immediate family. CAG will showcase over a dozen of the most significant artifacts from this collection, including several that were on the Apollo 11 mission to the moon, in which Armstrong famously made the “giant leap for mankind.” See these artifacts on display at NGC Booth #1417 through the afternoon of Friday, August 17.

A wing piece and a propeller piece from the Wright Flyer, the plane that made the first powered flight in 1903 at Kitty Hawk North Carolina. Under a special arrangement, Armstrong was allowed to retain pieces of the Wright Flyer.

An American flag, one of a number of flags that Armstrong took with him on the mission. Most of these were postcard-sized, but this one is relatively large: 11.75 x 18 inches.

A piece of Beta cloth, a fireproof material, with the Apollo 11 insignia.

An “insurance cover” from Apollo 11. These postal collectibles were signed by Armstrong and his Apollo 11 crewmates, Buzz Aldrin and Michael Collins. The astronauts signed hundreds of these and left them for their families to sell in case they did not return from the mission.

A NASA photograph showing Neil Armstrong. In it, Armstrong poses in his spacesuit, holding his helmet, with a lunar background. This image was used for the Newsweek magazine cover celebrating the Apollo 11 mission in July 1969.

A NASA photograph showing Aldrin descending the lunar lander ladder. The image was taken by Armstrong, just a few minutes after he became the first person to step onto the lunar surface.

A NASA photograph showing President Nixon and the astronauts, dated July 24, 1969. That was the day the Apollo 11 mission ended with the astronauts’ splashdown and recovery aboard the aircraft carrier USS Hornet. Nixon was on board the ship to greet the astronauts, who had to spend several weeks in quarantine.

A telegram sent by Nixon in connection to celebration of Armstrong by his hometown of Wapakoneta, Ohio. It reads, in part: “All Americans, all free men everywhere, join in proud recognition of your accomplishments as a member of that Apollo 11 mission.”

An Apollo 11 Crew Patch. Numismatists can compare the insignia on the Gold Robbins Medals with the Apollo 11 Crew Patch. On the Robbins Medals, the eagle’s talons are open, reflecting Apollo 11 astronaut Collins’ original concept, which was eventually deemed to be too warlike. The crew patch shows the official Apollo 11 insignia, with eagle’s talons grasping an olive branch. This design was ultimately adopted for reverse of the Eisenhower dollar in 1971, and was continued with the Susan B. Anthony Dollar in 1979.

CAG works directly with collectors, estates, artists and museums to preserve the authenticity and provenance of artifacts, memorabilia and estate items at the source. The Armstrong Family Collection, the first collection to be certified by CAG, represents one of the most historic and important collections of memorabilia of the last 50 years. The first of the items to be offered for auction will be part of a Heritage Auctions sale in November, the first of several by Heritage.