Donald Partrick’s set of U.S. half cents has not received the accolades it deserved. Indeed, with the assistance of Jon Hanson, Partrick assembled one of the five best sets of half cents to have been auctioned during the last half century.

So much attention has been paid to the colonial coins, State issues of the 1780s, 18th century medals, and pre-1793 patterns in the Partrick Collection, including Brasher Doubloons (https://tinyurl.com/BrasherDoubloons), Donald Partrick’s set of U.S. half cents has not received the accolades it deserved. Indeed, with the assistance of Jon Hanson, Partrick assembled one of the five best sets of half cents to have been auctioned during the last half century.

Many of Partrick’s half cents were unusually attractive and/or scored high in the category of originality. He had very important representatives of rare dates and interesting rare varieties.

Partrick’s better No Pole half cents are the focus here. These enigmatic varieties have fascinated coin collectors for more than 150 years.

Inexplicably, in 1795 and 1796, some half cents were struck without the pole, which holds up the Liberty Cap in the design. On 18th century half cents and Liberty Cap large cents (1793−96), the cap is not on Miss Liberty’s head. In the design, the liberty cap is on top of a pole that is diagonally behind Miss Liberty’s head. When the pole is absent, the cap is not linked to another design element. 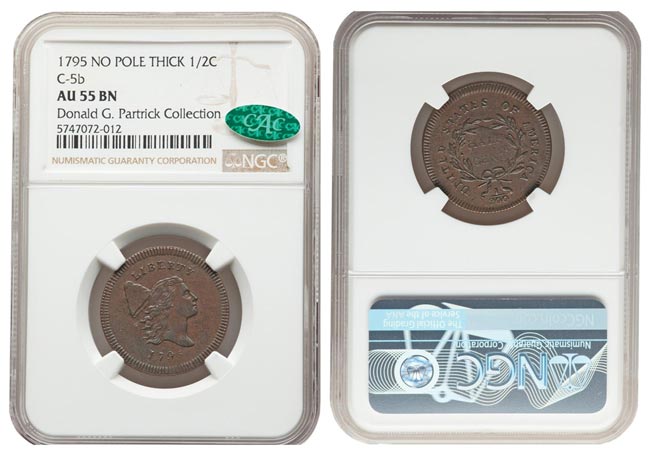 The concept of a Phrygian cap symbolizing liberty overall evolved from the custom of a pileus, a variety of a felt cap, indicating the freeing of slaves. Libertas, the ancient Roman goddess of liberty, was often depicted holding a rod that symbolized the granting of freedom to slaves and other oppressed people. In ancient illustrations, Libertas sometimes held a cap in one of her hands while holding a rod or pole in the other.

There were relevant symbols of poles representing liberty in artwork in Western Europe during the renaissance. By 1773, a leading newspaper in the Boston area, The Massachusetts Spy, featured a seated female figure holding a pole with a Liberty Cap. The founder and publisher of this newspaper, Isaiah Thomas, was strongly opposed to British rule of Massachusetts and other colonies.

Among the innumerable pre-1793 coins, patterns and medals that were in the Partrick Collection, the concept of liberty is portrayed in many ways. The liberty cap on a pole, however, is quintessential. 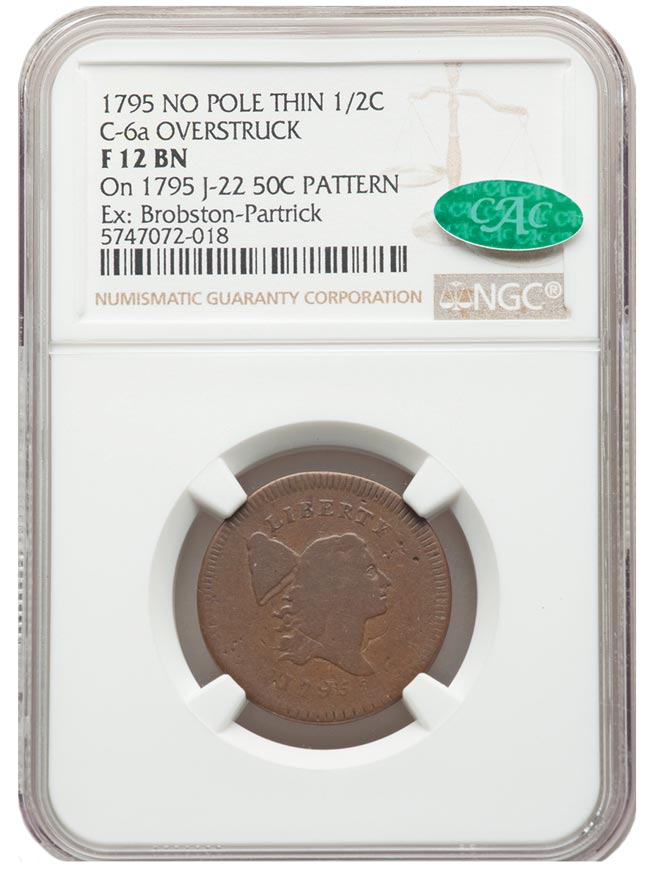 The No Pole and With Pole half cents of 1795 are dramatically less expensive than their counterparts of 1796, which are the keys to a set of business strike half cents. Collectors who cannot afford the ones in the Partrick Collection or equivalents may seek pleasing 1795 No Pole half cents, of lower grades, for much lower amounts.

About a week before the Partrick sessions in April 2021, Heritage sold a PCGS graded Fair-02 1795 No Pole half cent for $252, with clear eye, nose, mouth and cap. A relatively original, Fine grade 1795 No Pole could be acquired for less than $1,500. Higher quality pieces, including those that were in the Partrick Collection, cost much more.

An NGC graded AU50 1795 No Pole, Thin Planchet half cent in the Partrick Collection brought $6,600. A planchet is a prepared blank piece of metal that is placed into a coining press to make a coin.

This NGC graded AU50 1795 No Pole has a very noticeable gash on Miss Liberty’s neck and there are dark spots, with mild corrosion, between Miss Liberty’s neck and the border. The rest of this coin, however, is very appealing. There are few other contact marks, which are hardly noticeable. Minimal, if any, oil was added. For a very long time, the application of oil has been a common practice among early copper specialists. There are no significant hairlines on the obverse. The brown and reddish tan blend is attractive.

The reverse is exceptional. There is a little bit of corrosion here and there on the reverse, a very small amount for a pre-1800 copper coin. The reddish-tan reverse fields contrast well with the brown design elements. There are microscopic indentations, most of which are planchet defects.

This NGC graded AU50 1795 No Pole is a very desirable coin. I am taking issue with a cataloguer’s “EAC grade” of VF30. Even if points were harshly deducted due to the gash on the neck and minor discoloration, this coin could not grade below XF40, in my opinion. The $6,600 price realized was strong, though not astonishing.

A Partrick Collection, 1795 No Pole, Thick Planchet half cent was NGC graded as AU55 and CAC approved. Although some design elements are a little faint, I found the AU55 grade assignment to be more than fair. The force and evenness of impressions during striking on a screw press affect the boldness of design elements. The loss of detail from circulation and detail that is missing the moment after a coin was struck are two different concepts.

This whole coin has an amount of wear that is consistent with an AU55 grade. Moreover, there are no annoying contact marks. Its surface quality is much better than usual for an AU55 grade early half cent. While almost all coppers from the 18th century have some degree of noticeable corrosion, this coin has very little. I enjoyed viewing this CAC approved, NGC graded AU55 1795 No Pole half cent (lot #3616).

Although the $21,600 result was very strong, I was not surprised. This coin really has to be examined in actuality and compared to other 1795 half cents to be understood and appreciated.

Besides, no 18th century copper will be truly pristine. Almost all pre-1816 coppers have been cleaned, dipped, chemically treated or just oiled at one time or another. Importantly, forms and degrees of treatment vary. Some treatments are minor and others are very harmful. To evaluate the surfaces and relative originality of an early copper coin, there is usually a need to consider a multitude of variables, more in number and complexity than those that pertain to gradable early silver coins. If two coins were struck from the same pair of dies and have markedly different certified grades from the same grading service, the coin that was assigned a lower grade may be more desirable in some ways than a coin with a much higher certified grade.

The coin sold as lot #3619, another 1795 No Pole half cent, was NGC graded as Fine-12 and CAC approved. It is much more appealing than many half cents that have been assigned higher grades by NGC or PCGS.

For a pre-1800 half cent that has been certified as F12, it is really remarkable, with very impressive surface quality. There are minor hairlines, which can be found on relevant coins that have been certified as MS63 or higher! Furthermore, there are very few contact marks and scratches on this F12 grade 1795 No Pole half cent. The few that are there are much more noticeable in images than they are as this coin is examined in actuality. Moreover, this coin scores well in the category of originality. Additionally, this coin’s mellow brown color is really neat and memorable.

Also, the Heritage cataloguer’s pedigree indicates that this F12 grade half cent was previously owned by Samuel Jillette. I believe that Samuel was the father of a distinguished comedian, Penn Gillette of ‘Penn & Teller’ fame. 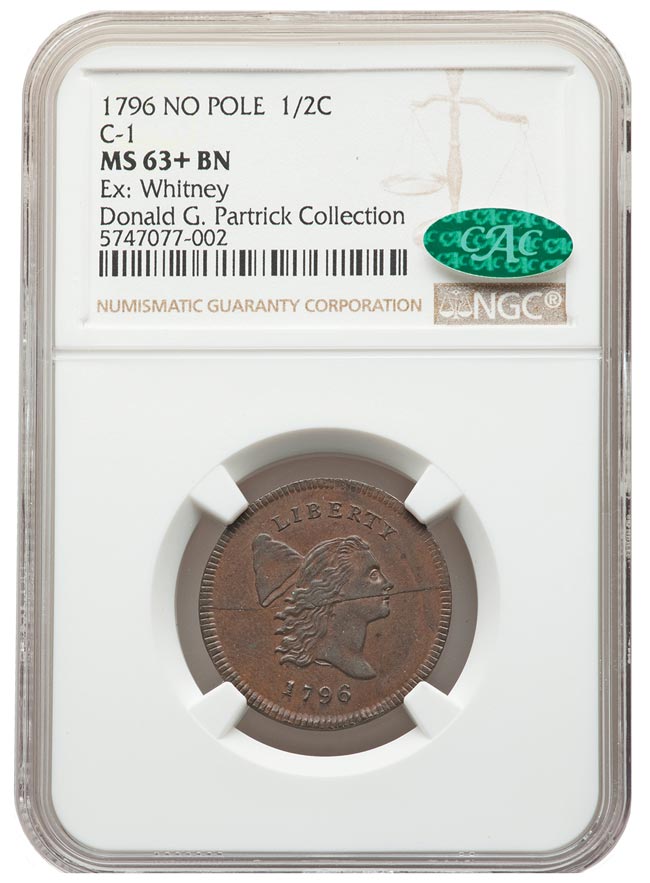 Through an agent, Partrick purchased his best 1796 No Pole half cent from a Stack’s auction on May 4, 1999, in New York. An entire catalogue was devoted to the collection of 1796 coins assembled by John Whitney Walter. For years, Walter used his middle name, Whitney, to refer to his coins and his collections.

The Whitney-Partrick 1796 No Pole half cent was NGC certified as MS63+ with a designation that it is brown in color, and approved by CAC. It scores higher in the category of originality than many other 18th century half cents and large cents that are designated as brown!

At a glance, the Whitney-Partrick 1796 No Pole may appear to coin enthusiasts who are unfamiliar with the issue to have wear. Some parts of the design were not well formed when this coin was struck. In other words, there was detail missing when this coin left the coining press. While this is not unusual for early U.S. coins, the absence of detail and toning pattern on this coin require a close examination to determine that it is strictly uncirculated and it certainly is so. 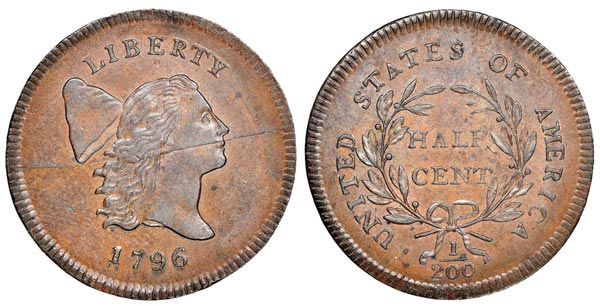 The $432,000 result in April 2021 was a moderate price. It was a much better value than were some of the gold coins in the Simpson session (https://tinyurl.com/SimpsonGold) during the same week.

Partrick had two additional 1796 No Pole half cents. One with serious problems brought $45,600. It was in an NGC holder with a “VF Details” label. Another, which apparently was earlier in the Loye Lauder Collection, was NGC graded F12 and realized $156,000.

Of course, all of the more than 270 U.S. half cents in the Partrick Collection cannot be covered in one discussion. While every coin was not impressive, the set as a whole was terrific. I was drawn to the large number and respective textures of Partrick’s half cents that scored highly in the category of originality.

Subscribe to September 2021 edition of Monthly Greysheet for the industry's most respected pricing and to read more articles just like this.