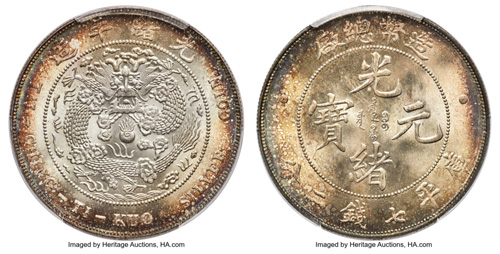 DALLAS, Texas (June 23, 2022) – What has long been quietly understood is now out in the open, undeniable public knowledge: the demand for rare Asian coins and paper money is soaring. Nowhere will that be more evident than at Heritage Auctions’ semi-annual Signature® event held in tandem with the Hong Kong International Numismatic Fair, in which collectors, investors and enthusiasts alike have a chance to acquire some of the best pieces the market has to offer.

“Heritage Auctions received an exceptionally positive welcome to our addition of a Platinum Session to the sale in December, so we are thrilled to make this a permanent feature to our Hong Kong events,” says Cristiano Bierrenbach, Heritage Auctions Executive Vice President of International Numismatics. “This event only solidifies Heritage Auctions’ position at the forefront of Asian numismatics collecting, and allows our bidders numerous opportunities to add prized pieces of history to their own collections.”

A Republic Sun Yat-sen silver Pattern 50 Cents Year 26 (1937)-S MS62 NGC (estimate: $100,000-150,000) is one of the rarest Sun Yat-sen minors of the mid-20th century Chinese series, rarely coming to market and often not in appreciable condition. The second-finest certified example of this rare “P’u” pattern half dollar is an ideal “sister” piece to the full Dollar Pattern offered at Heritage Auctions in December. The example offered here was similarly missing from the Ultima, Wright, Wa She Wong, Ching and Von Halle collections, and represents the second-finest yet recognized in the certified population, which includes only five other examples.

The finest and only straight-graded Mint State example of the Republic Chang Tso-lin silver Medallic 50 Cents ND (1927) MS63 PCGS (estimate: $60,000-80,000) is one of fewer than 10 to make it to auction in the last two decades; among those, most that were graded received details designations from NGC or PCGS. None of the others has come close to this magnificent example; NGC has awarded straight grades (AU50 and AU55) to just two others, and PCGS has not graded another example that did not merit details. This coin likely was produced in conjunction with Chang Tso-lin’s assumption of the position of Grand Marshal of the Army and Navy of the Pei Yang Military Government in Beijing on June 18, 1927 – making him Generalissimo and de facto supreme ruler of the country.

Other top lots in the Glorium collection include, but are not limited to:

Among the top draws in the Tony Ma Collection is a Republic Tuan Chi-jui Dollar ND (1924) MS64 PCGS (estimate: $40,000-60,000), from the Tientsin mint, was produced in commemoration of Tuan Chi-jui's taking office as the provisional Chief Executive of the Republic of China at the outset of the “Peaceful Unification” and the abolition of the presidency. This prized single-year type was struck by supporters of this controversial figure during an increasingly tumultuous time in Chinese history, and clearly is a trophy of the entire Republican Dollar series. 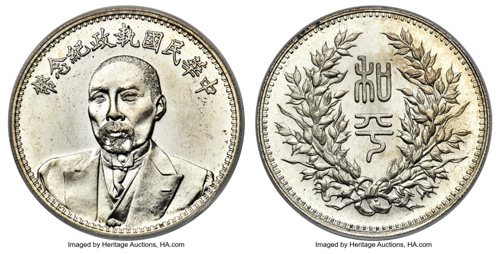 A Republic Yuan Shih-kai gold 10 Dollars Year 8 (1919) MS63 PCGS (estimate: $40,000-60,000), from the Tientsin mint, is fabled as one of China’s few proposed gold coins of the modern era, representing part of Finance Minister Tsao Yu-lin’s attempt to revive a gold standard in the nation. But the project ultimately failed, leading to the already small allotment of 10 and 20 Dollar-coins vanishing from circulation, with even those that survived oftentimes showing ample evidence of being poorly kept. This extraordinary example ranks among the finest examples of the type ever handled at Heritage Auctions.

Other top lots from the Tony Ma Collection include, but are not limited to:

Amid a surge in demand for Asian currency, a pair of notes – one Chinese and one from Hong Kong – each could bring $30,000 or more when they are sold in Heritage Auctions’ HKINF World Paper Money Signature® Auction July 6-7 in Hong Kong.

“The Asian currency market is as robust as it has been in a long time,” Heritage Auctions Numismatics Vice President Dustin Johnston said. “Recent results for notes of all collectible levels have underscored that upward momentum, which gives significant optimism that the trend will continue."

A People’s Bank of China 100 Yuan 1949 Pick 835a S/M#C282 PMG Gem Uncirculated 65 EPQ (estimate: $30,000+) is an important offering from the initial denomination of the “Georgian Calendar” subseries, a rarity in any grade. The PMG Population Report for this note is significantly smaller than most others in this series and rivals the famed 50,000 denominations in terms of rarity and desirability. This is just the sixth example offered through Heritage Auctions in the last decade of what was a very short-lived smaller denomination, quickly rendered valueless in contemporary terms.

Carrying the same $30,000+ pre-auction estimate is a Hong Kong Hongkong & Shanghai Banking Corp. 50 Dollars 1.1.1921 Pick 168s KNB56S Specimen PMG Choice Uncirculated 63, an iconic Waterlow & Sons design that seldom is seen in any format. This high denomination was heavily forged and any extant example is a treasure. The offered example is one of only nine graded in the PMG Population Report, and just the second Heritage Auctions has offered.

One of the most iconic notes of the first series, the design for the People's Bank of China 50 Yuan 1949 Pick 830a S/M#C282-36 PMG Gem Uncirculated 65 EPQ (estimate: $25,000+) was said to have been adapted from an earlier 10 Yuan denomination, a design that also featured a farmer and worker. An eminently collectible type and increasingly desirable in the higher grades. The example offered in this auction features the desirable six-digit serial number is seen on this variety.

A Tannu-Tuva Republic 10 Aksha 1935 Pick 13 PMG Very Fine 20 (estimate: $20,000+) comes from a nation-state acknowledged by only two other nations: the former U.S.S.R. and China. Tannu-Tuva was a small autonomous part of the former U.S.S.R., adjacent to the Mongolian Border, and produced only four banknote series: 1924, 1933, 1935 and 1940. This impressive 10 Aksha is the second-highest denomination from the 1935 series, the first ever offered at Heritage Auctions and possibly the first ever offered in a global, public auction. This example is the first and only Pick 13 graded by PMG.

Images and information for all lots in the auction can be found at HA.com.4037.