A portion of the proceeds from the sale of this commemorative coin will go towards building awareness and enforcement to addressing the dangers facing rhinoceros. 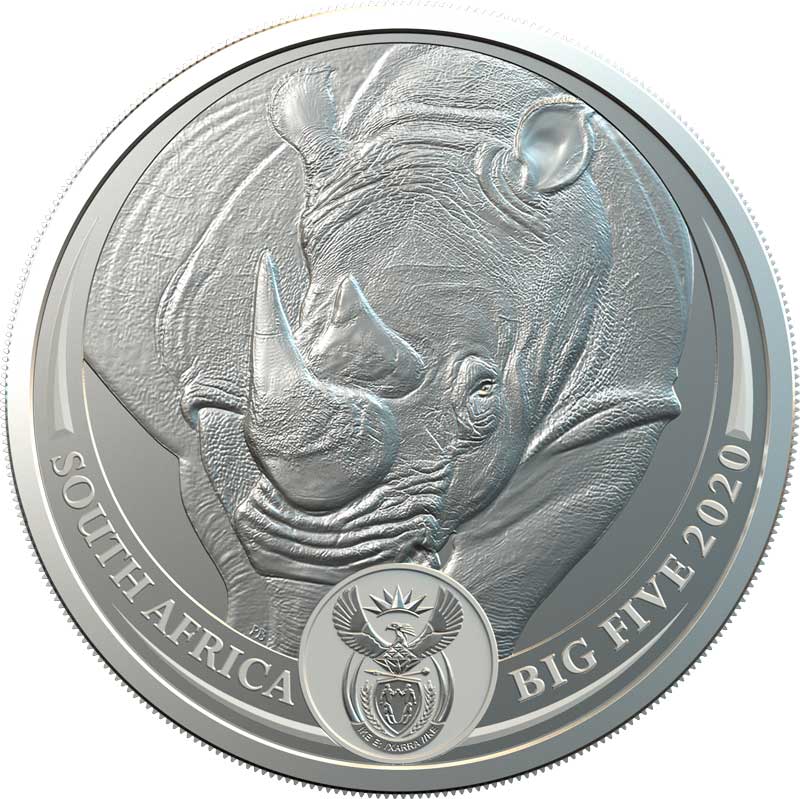 Centurion, South Africa – 03 February 2020: The South African Mint, a wholly owned subsidiary of the South African Reserve Bank (SARB) has announced the launch of the third coin in the Big 5 series featuring the indomitable rhino.

The “Big Five” term originated when big game hunters visited the shores of Africa to shoot for trophies, and locals warned them about the five most dangerous animals in Africa: the elephant, lion, leopard, rhino and buffalo. In 2019, the South African Mint introduced the Big 5 coin series which is a multi-year coin program of exquisitely crafted, highly collectable coins that feature the likeness of these majestic creatures. 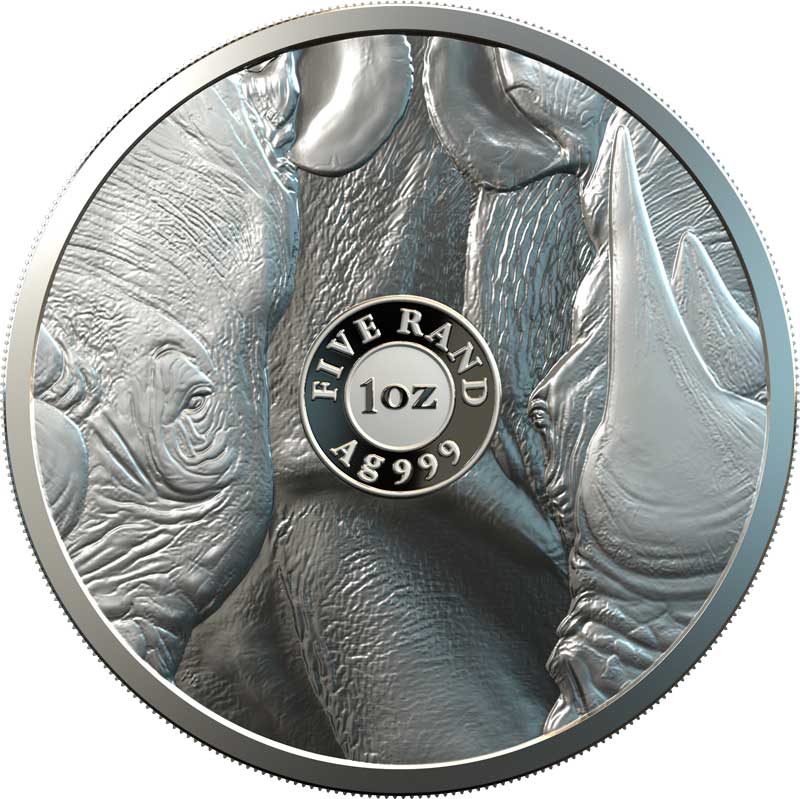 Reverse side of the Rhino coin in proof format

The rhino populations in South Africa are not keeping pace with the current poaching rates, and conservationists continue to fight this battle. During the period of January to June 2019, the number of rhino poached countrywide was 318, only dropping slightly from the 386 rhino killed during the same period in 2018.

“The brazen slaughtering and dehorning of the rhino almost to the brink of extinction has spurred widespread outrage from activists to advocates, but a lot more needs to be achieved on the demand side” says Gerda Janse van Vuuren, Acting Managing Director of the South African Mint.

The South African Mint will partner with the Wildlife Conservation Trust (WCT) during 2020 to support its work. The partnership will see a portion of the proceeds from the sale of the Big 5 Rhino coin go towards protecting the fast decimating populations of rhinos.

The WCT facilitates projects that focus on conservation, rehabilitation, research and the protection of wildlife; as well as education and training programmes relating to wildlife conservation and the environment.

“Awareness and enforcement and, awareness of the enforcement is vital to reversing the complex socio-ecological problem facing national parks. The World Money Fair held annually in Berlin was an appropriate global platform for us to have a conversation on the conservation of rhinos. The rhino horn trade has grown beyond the medicinal myth and now is largely sought after by wealthy individuals to advertise their arrival. The end however does not justify the means” adds Janse van Vuuren.

The rhino is the third animal to be featured on this series, following the elephant and the lion. The obverse features a breath-taking design of the African Rhino, which fills up much of the surface area of the coin. The words ‘South Africa’ and ‘Big 5 2020’ appear below the image, with South Africa’s national coat-of-arms in the centre signifying its legal tender status.

From some 500,000 rhino across Africa, Southern Asia and Indonesia at the start of the 20th century, human avariciousness has managed to wipe out about 95% of this population with a mere 29,000 surviving in the wild albeit under protection of guards armed with military grade equipment and air support.

“As the South African Mint, we are uniquely placed to use our coins to canvass for support for causes close to every South African. In 2019, we had the country talking about South Africa’s 25 years of constitutional democracy. With the launch of the Big 5 Rhino coin at the WMF, we hope to rally the world to support our efforts to protect the rhinos in the wild or risk seeing them only on our coins,” says Janse van Vuuren in conclusion.

Prestige Bullion, the joint venture between the South African Mint and Rand Refinery also announced that they will soon be introducing the Big 5 as a bullion product in platinum and gold coins. This significant investment grade coin programme will allow those wishing to diversify their portfolios a greater choice while propelling the Mint into the impressive company of highly respected peers offering investment products in platinum, gold and silver.

The Big 5 gold and platinum bullion coins will bear the same design as the collectable BU and proof coins and will be issued in the same sequence: elephant, lion, rhino, leopard and buffalo, beginning in the first quarter of 2020.

About South African Mint: The South African Mint is the continent’s leading manufacturer of legal coin tender, as well as commemorative and rare collectible coins. With over 100 years’ experience in supplying symbols of value to the African and global markets, we pride ourselves in delivering products that represent our commitment to uniquely African design and supreme craftsmanship. We collaborate closely with our customers to develop distinct and durable monetary products that capture and preserve the heritage and pride of a nation. The South African Mint is a wholly owned subsidiary of the South African Reserve Bank (SARB), established in accordance with the SARB Act 90 of 1989, as amended.