20 important examples of these popular "Referendum Dollars" will be on offer, including three examples thought to be unique. 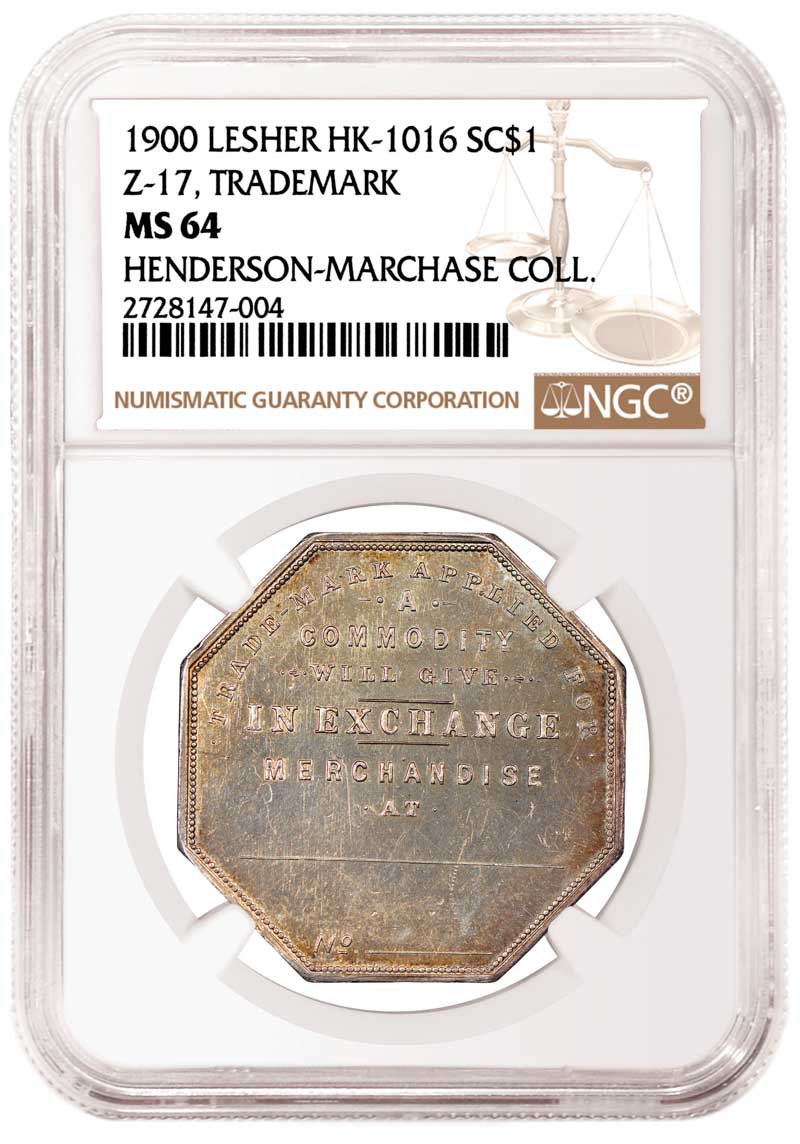 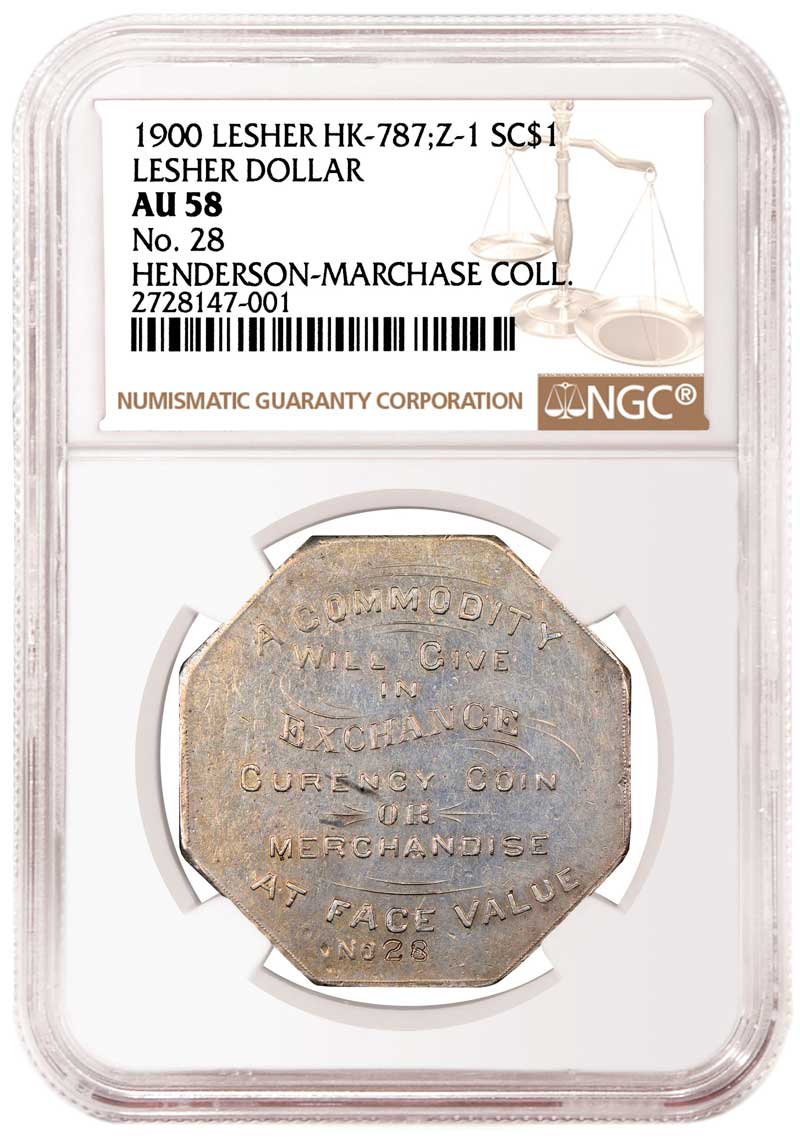 A choice NGC AU58 example of the 1900 Lesher Dollar (HK-787) from the Henderson-Marchase Collection, to be auction off by Kagin's in March 2020. Visit kagins.com for details.

SARASOTA, Fla. (Feb. 12, 2020) — The most complete set of Lesher “Referendum Dollars” — which is entirely certified by Numismatic Guaranty Corporation® (NGC®) — is being sold by Kagin’s at the 2020 ANA National Money Show in Atlanta on February 28. The Henderson-Marchase Collection consists of 20 of the silver octagonal medals that were privately made in 1900 and 1901 by Joseph Lesher of Victor, Colorado. Kagin’s estimates the medals to be worth as much as $500,000 in total.

Lesher, a silver mine owner, was an advocate of the wider use of silver, the value of which was suffering at the end of the 19th century. By making the medals, Lesher was skirting US laws against private coinage. The term “referendum” in their name meant that Lesher suggested that the public decide on their own whether to accept them. In fact, all the medals include a price of either $1 or $1.25, well above what their silver content was worth at the time.

The centerpiece of the Henderson-Marchase Collection is the only known example that contains the words “TRADE-MARK APPLIED FOR.” This particular medal is attributed as HK-1016 (after Hibler and Kappen, the authors of So-Called Dollars, an authoritative reference on these and other tokens and medals) and Z-17 (after Farran Zerbe, a former American Numismatic Association (ANA) president who researched the medals). Kagin’s estimates the medal, which is graded NGC MS 64, will sell for $50,000 to $75,000.

The collection contains two other Lesher Dollars (both dated 1901) that are also believed to be unique:

Like nearly all the Lesher Dollar varieties, these contain an image of the Pikes Peak Silver Mine on the top half of the obverse. Below that is space for a merchant’s name and a serial number.

Other highlights include a Lesher Dollar stamped “J.E. Nelson & Co. Holdrege, Neb.” (HK-1018, Z-13) and graded NGC AU 55 that is one of only eight examples known. These were produced for a clothing store and are the only pieces that refer to a company or person outside of Colorado. This example has an estimate of $40,000 to $50,000.

No more than 3,500 Lesher Dollars are believed to have been minted. Lesher struck his first 100 medals with a design that featured little more than words and a unique serial number. From this group, the Henderson-Marchase Collection has serial number 28, which is attributed as HK-787, Z-1 and graded NGC AU 58. It has an estimate of $4,000 to $6,000.

“Medals like these capture a snapshot in time — in this case, a silver mining bust that sparked a creative numismatic experiment in Colorado,” said NGC Chairman Mark Salzberg. “NGC is honored to have authenticated, attributed, graded and preserved this important collection.”

The Henderson-Marchase Collection was previously owned by William C. Henderson, a longtime ANA treasurer and mayor of Colorado Springs, Colorado, who was instrumental in convincing the ANA to locate its headquarters there. The set was submitted to NGC for certification in 2017 by Christopher Marchase, Henderson’s grandson.

“We were delighted that these medals were already attributed and certified by NGC when they were consigned to us,” said Don Kagin, president of Kagin’s. “NGC is the premier grading service for so-called dollars and other tokens.”

The Kagin’s auction catalog produced in advance of the sale represents an important contribution to the research of Lesher Dollars. This research has been added to NGC Coin Explorer at NGCcoin.com/Explorer along with NGC’s image gallery of the Henderson-Marchase Collection at NGCcoin.com/Lesher.

To learn more about the upcoming Kagin’s auction, visit kagins.com.