The notable auction firm continues to sell off one of the greatest collections ever assembled. Two new auctions are announced, one focused on paper money and the other on rare coins -- both to be sold in Baltimore in conjunction with the Whitman Expo in March. 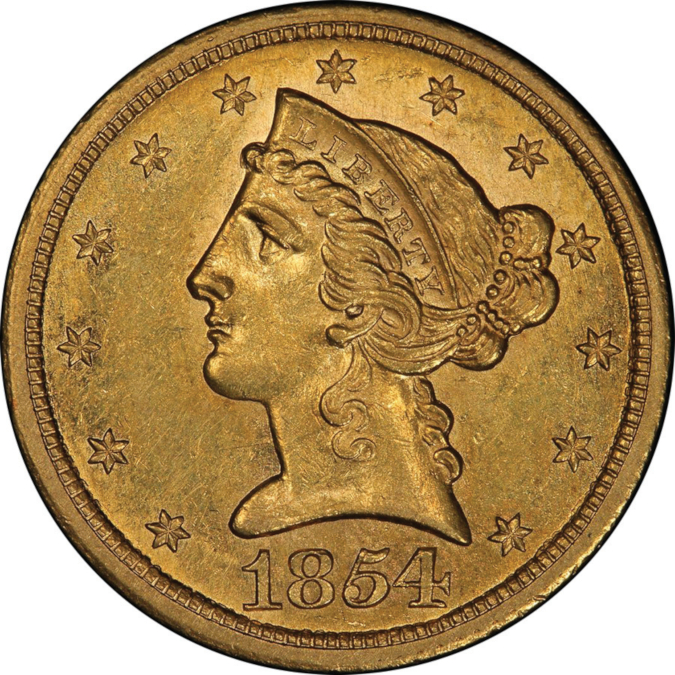 Santa Ana, CA -- Stack’s Bowers Galleries is pleased to announce Part VI and Part VII of the now legendary D. Brent Pogue Collection. The Pogue Collection will forever be known as an incredible assembly of the very finest early American coins from 1792 through the 1830s. The five sales already completed featured this portion of the collection, almost to completion, with notable additions such as the fabulous collection of $3 gold coins. Those apparent outliers were a foreshadowing of the upcoming sale scheduled for March 18-20, 2020, in Baltimore, Maryland.

Part VI of the D. Brent Pogue Collection will showcase his marvelous paper money collection comprising approximately 230 notes encompassing the areas of large size type notes, small size type notes and National currency. Many of the notes in the collection are among the finest examples known for their types. The collection was also assembled with an appreciation for serial number 1 notes and rare “Star” replacement notes.

Part VII of the D. Brent Pogue Collection continues with other coin series which Brent collected quietly for his own enjoyment. This sale presents these areas of interest and displays far more diversity than has come to be expected from this collection. It is an exciting opportunity for collectors who desire this important American provenance, but found many Pogue coins financially out of reach. This sale includes pieces worth from hundreds of dollars to millions—truly something for everyone! Still, the one guiding principle that will be evident in this presentation, as it was in prior Pogue offerings, is a commitment to quality.

Rare American historic medals make a small appearance, led by a pair of prized Libertas Americana medals, one in silver and one in bronze. The inclusion of these in the Pogue Collection points to an appreciation of history and medallic art as well as pure numismatics.

The coins range widely from small selections of superb half cents, led by a Red and Brown 1796 With Pole in MS-66, to small cents including affordable classics such as a 1909-S V.D.B. cent graded MS-66RB (PCGS). Even a modern 1960 Small Date cent graded MS-67RD (PCGS) is included! These are the beginnings of a basic type set, and representatives of many denominations are included. Thus, two-cent and three-cent pieces, half dimes, nickels, dimes and twenty-cent pieces follow. In each category, classic rarities will be found, as will basic type coins such as 1916 dimes, both Philadelphia and Denver issues in superb condition.

With United States quarters, the dynamic changes, as this was clearly a Pogue favorite. Following a small selection of Liberty Seated pieces comes one of the most fabulous collections of Barber coins ever seen, truly special for its extraordinary quality as well as its aesthetic appeal. The collection is visually stunning, loaded with magnificent rarities, and even includes the occasional duplicate; there are two examples of the 1901-S, one MS-66+ (PCGS) and one MS-67+ (PCGS).

The offering of Standing Liberty quarters is extensive, though not quite complete, and includes coins in a wide range of value from a 1929-S in MS-66+ (PCGS) to the famous 1918/7-S overdate in MS-65 (PCGS). Washington quarters follow, with a collection that, like the Barber quarters, is visually impressive and of exceptional quality, with spectacular toning found throughout. All are graded by PCGS and with rare exceptions are ranked as MS-66 or

For half dollars and dollars, partial type sets feature high-quality coins, examples of which run the gamut from a 1964-D Kennedy half dollar in MS-66+ (PCGS) to an 1804 silver dollar. “An 1804 silver dollar?” one might ask with surprise. YES! The Pogue Collection included three examples of this most famous American coin. In this sale, Stack’s Bowers Galleries is pleased to once again offer the famous Garrett specimen of this American treasure! As famous as this coin is, it is but one of the highlights of this landmark sale.

Gold coins deliver even more important properties, with small selections of each denomination from gold dollars to double eagles. These begin with an 1849 gold dollar graded MS-67 (PCGS), and close with a 1927-S Saint-Gaudens double eagle graded MS-67 (PCGS). In between there are quarter eagles (including an 1841 Little Princess graded Proof-64 Cameo), a $3 piece (an 1878 graded MS-67 by PCGS), a $4 piece (an 1879 Flowing Hair graded Proof-66 Cameo by PCGS), $5 coins (including a 1911-S in PCGS MS-66) and both the Wire Rim and Rolled Rim Indian eagles, each graded MS-67 by PCGS. With all this, the highlight is yet to be mentioned!

One of D. Brent Pogue’s most prized accomplishments was his complete set of 1854-S gold coins. Like the rest of this sale, even this group represents great diversity in value, ranging from the 1854-S $10 in AU-58 (PCGS), to one of the rarest coins in the entire American series, the finest known example of the legendary 1854-S half eagle! From the first Pogue sale to today, THIS is the coin many have been waiting to see, and it will not disappoint! It is stunningly attractive and graded AU-58+ by PCGS. It has not been offered publicly since the October 1982 sale of the United States Gold Coin Collection, formed by Louis E. Eliasberg, Sr. Just 268 examples were struck, and this is the very best of the tiny group that survive today.

The D. Brent Pogue Collection Part VI, Masterpieces of United States Paper Money will be offered on the evening of Thursday, March 19, 2020 at the Stack’s Bowers Galleries Official Auction of the Whitman Coin & Collectibles Spring Expo. It will be followed on Friday evening, March 20, 2020, by The D. Brent Pogue Collection Part VII, Masterpieces of United States Coinage. For more information contact Christine Karstedt at ckarstedt@stacksbowers.com or visit the firm’s website StacksBowers.com.