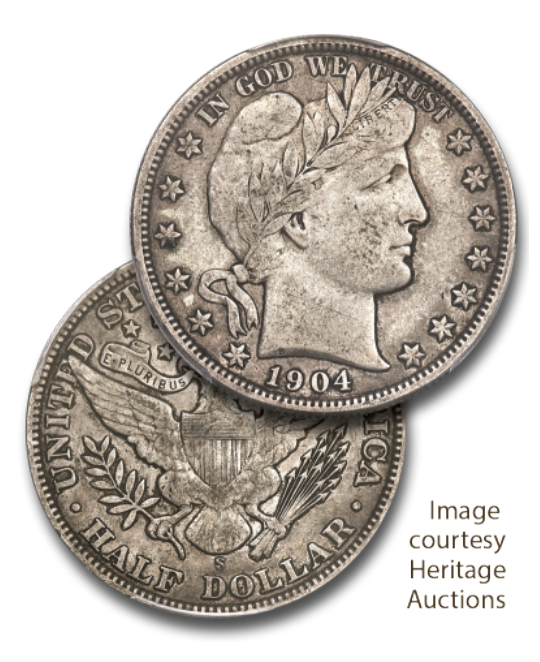 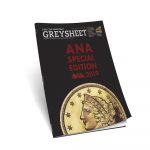 The August 2019 edition of The Monthly Greysheet

This article appeared in print in the August 2019 issue of The Monthly Greysheet. Click here for more information on this publication.

A theme here is that Extremely Fine grade Barber halves may be excellent values for budget-minded collectors and for collectors who enjoy completing sets of classic U.S. coins. Unlike most series that began in the nineteenth century, a truly complete set of Barber halves is a practical objective. There are no dates that are very expensive in circulated grades.

Although Barber coins are not considered among the most attractive of all U.S. coin designs, they wear well and tend to tone in an attractive manner for reasons that are not entirely understood. While properly stored in envelopes or albums that collectors habitually used during much of the twentieth century, Barber coins typically developed appealing colors. In particular, Barber coins were often placed by collectors in “National” brand albums or boards, which were relentlessly popularized by Wayte Raymond in the middle of the twentieth century. For some reasons, Barber coins in these holders often toned wonderfully, more so overall than other types of silver coins.

Pictures tend not to fairly represent naturally toned silver coins, which need to be seen in actuality to be fully appreciated. With or without much toning, though, it is not easy to find relatively original XF40 to AU55 grade Barber half dollars.

Uncirculated Barber halves were set aside by collectors, dealers, speculators and banks. Some were used as cash reserves, especially during the period from 1905 to 1915 as no silver dollars were then minted and thus the half dollar was the largest silver denomination. Invariably, many people then demanded the option of ‘cashing out’ their accounts into silver coins. A great many depositors tended to feel more comfortable if significant quantities of silver coins were physically present in banks, even if such coins were not distributed for decades.

An XF40 grade Barber half is much less less likely to have been deliberately modified than a Barber half that grades in the MS60 to MS63 grade range. For decades, there has been a strong financial motive for unethical dealers to misrepresent an MS60 to MS63 grade Barber half as an MS64 to MS66 grade coin. Lower tier uncirculated Barber halves have been artificially brightened and/or doctored to be misrepresented as choice to gem uncirculated coins. While some Extremely Fine grade Barber halves have been accidentally harmed by dealers and collectors, there has never been much of a financial incentive to deliberately modify them to deceive people.

Besides, XF40 grade coins are are supposed to have a noticeable amount of wear.  Many bagmarks or bank-handling marks have already been worn away or normally muted as a coin circulates to the point that it grades ‘Extremely Fine.’

Of course, the term ‘relatively original’ is not entirely explainable. Sadly, over a period of many decades, most classic U.S. coins have been subject to various sorts of cleaning, dipping, wiping, environmental hazards and/or placements of foreign matter.

Fortunately, coins tend to recover. A silver coin that is unnaturally white will often naturally retone, if stored properly.

It is best to think of originality in the framework of a spectrum, rather than in ‘all or nothing’ terms. It is impossible to know the entire history of a classic U.S. coin. After all, a rare U.S. coin could not have been followed continuously by video recording devices since the moment it was minted.

So, coin experts use their experience, natural aptitude and developed skills to interpret the relative originality of coins. While there will always be legitimate differences of opinion among experts, it is fairly easy to learn about the natural tones found on relatively original Barber coins in Extremely Fine to AU grades. This is not a particularly controversial area of numismatics. Wild, psychedelic colors on some uncirculated Kennedy halves are a different matter.

It is important for collectors to consult experts and to personally view a large number of coins. A collector who does not yet have much experience with a particular series may wish to acquire type coins before spending larger sums on better dates.

The retail value for an XF40 Barber half of one of many, not so scarce dates, is only around $200; this is not a tremendous amount to lose. The cost of a mistake is not overwhelming.

When seeking U.S. coins that cost more than $500 each, collectors should only consider coins that are PCGS or NGC certified, unless a better grading service is founded in the future. On average, PCGS or NGC graded coins with CAC stickers will be of noticeably higher quality than those without CAC approval.

For circulated Barber halves of the least scarce dates, “type coins,” a category that includes dozens of dates, the costs of certification tend to amount to a significant percentage of the respective value of each coin. Some dealers will thus not submit them to PCGS or NGC.

In the context of Extremely Fine grade Barber halves, it is best to think of Greysheet bids and CPG® (collector price) guides as referring to above-average, PCGS or NGC graded coins, and to value raw coins at considerably lower levels. While there are raw XF to AU grade Barber halves that have never been submitted to PCGS or NGC, there are also a large number that have been submitted and failed to receive numerical grades.

A seller may not reveal the whole history of each coin that he offers. Moreover, a dealer often will not know whether a raw coin in his possession has been sent to PCGS or NGC in the past. It is a good idea for buyers of raw coins to be cautious and to proceed slowly.

While $200 for an XF40 Barber half is not a large amount in markets for classic U.S. coins, better dates tend to cost much more. In this series, there are seventy-three dates, including U.S. Mint locations. In the present context, the 1892-‘Micro O’ can be ignored. This ‘Micro O’ is a rare and very unusual mintmark variety and an 1892 with a regular ‘O’ mintmark is not particularly expensive. While an Extremely Fine grade 1892-‘Micro O’ might cost a collector an amount between $15,000 and $20,000, an 1892-O with a regular mintmark would only cost a fraction as much.

Among better date Barber halves, relative scarcities and market values tend to vary considerably by grade or range of grades. It is thus hard to classify a particular group of dates as semi-keys.

For the least scarce dates, “type coins,” an AU55 grade Barber half dollar is valued in the Greysheet at more than twice as much as an XF40 grade coin; $330 is more than 206% of $160. There just is not all that much of a difference in surviving design detail.

Some dates are so hard to find in the XF40 to AU50 range that collectors may have to wait years. The 1913, the 1914 and the 1915 Philadelphia Mint dates are valued as scarcities in grades above Fine-15, and are often referred to as semi-keys. The scarcity of the 1910, however, is unrecognized.

In regard to business strikes in all grades of 1910 halves, PCGS has graded 434, NGC has graded 181, and CAC has approved 43. Some collectors of circulated Barber coins remove their coins from PCGS or NGC holders and sell them years later. There are additional reasons as to why population data should not be thought of as precisely accurate. I hypothesize that these published numbers amount to about 390 different, certified 1910 halves, maybe 32 of which currently have CAC stickers.

Greysheet bids and corresponding CPG® values for 1915 halves are two to three times as high as Greysheet values for 1910 halves in XF40 to AU58 grades.While it is true that 1915 halves are scarcer overall, finding a certified 1915 in the XF40 to AU55 grade range is probably easier than finding a certified 1910 in this same range of grades. The 1910 has been overshadowed by later Philadelphia Mint Barber half dollars.

Generally, the commonality of Barber halves in AG03 to Fine-15 grades has caused collectors to ignore their scarcity in higher grades. There are more than twenty dates in the series for which fewer than 100 different coins have been certified as grading in the XF40 to AU50 range. Some of these are not relatively original.

Assembling a relatively original set of Extremely Fine to About Uncirculated grade Barber halves would be a challenge that would probably require several years, at least. In addition to being much less costly than collecting uncirculated Barber halves, such a pursuit would be intriguing and fun.