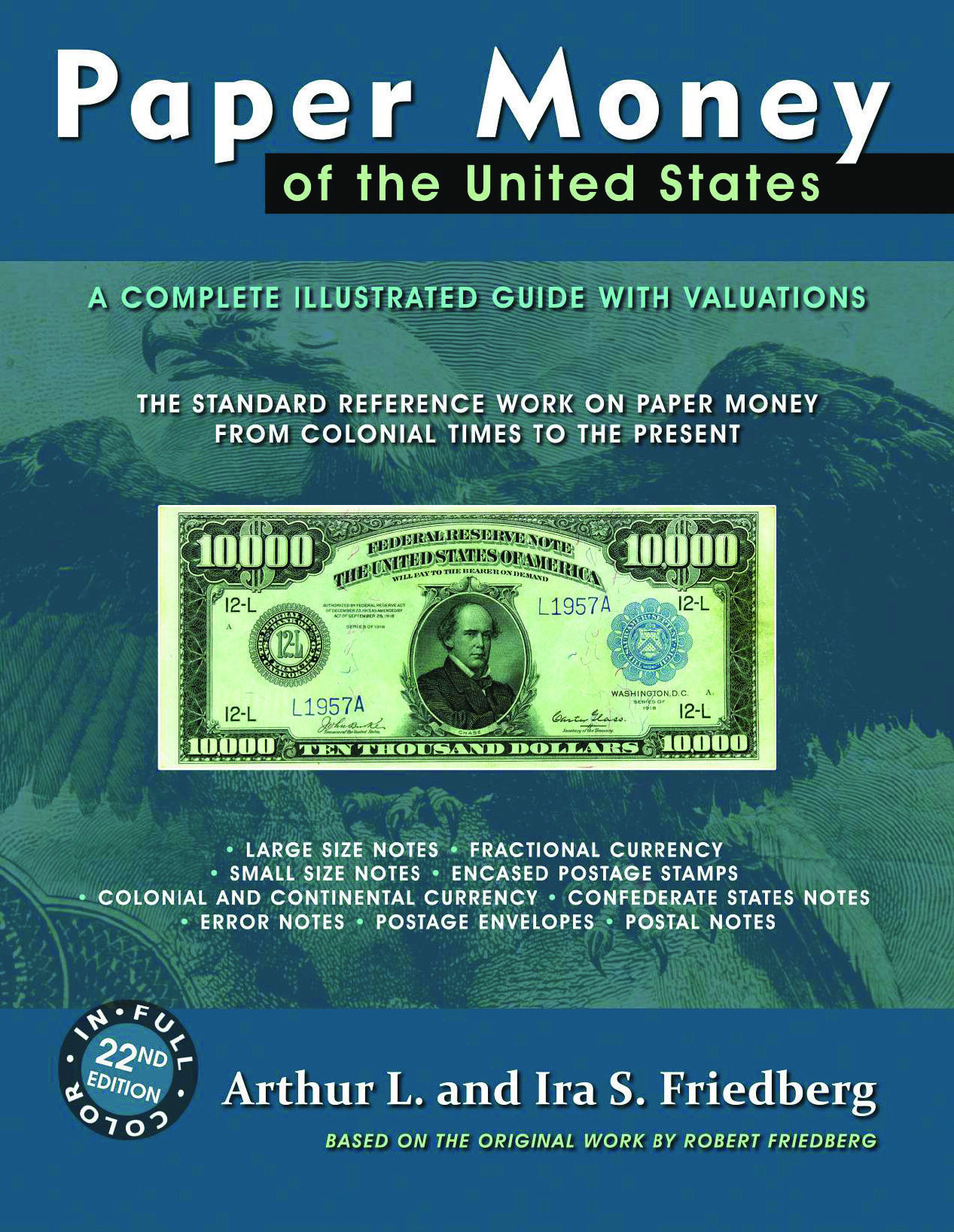 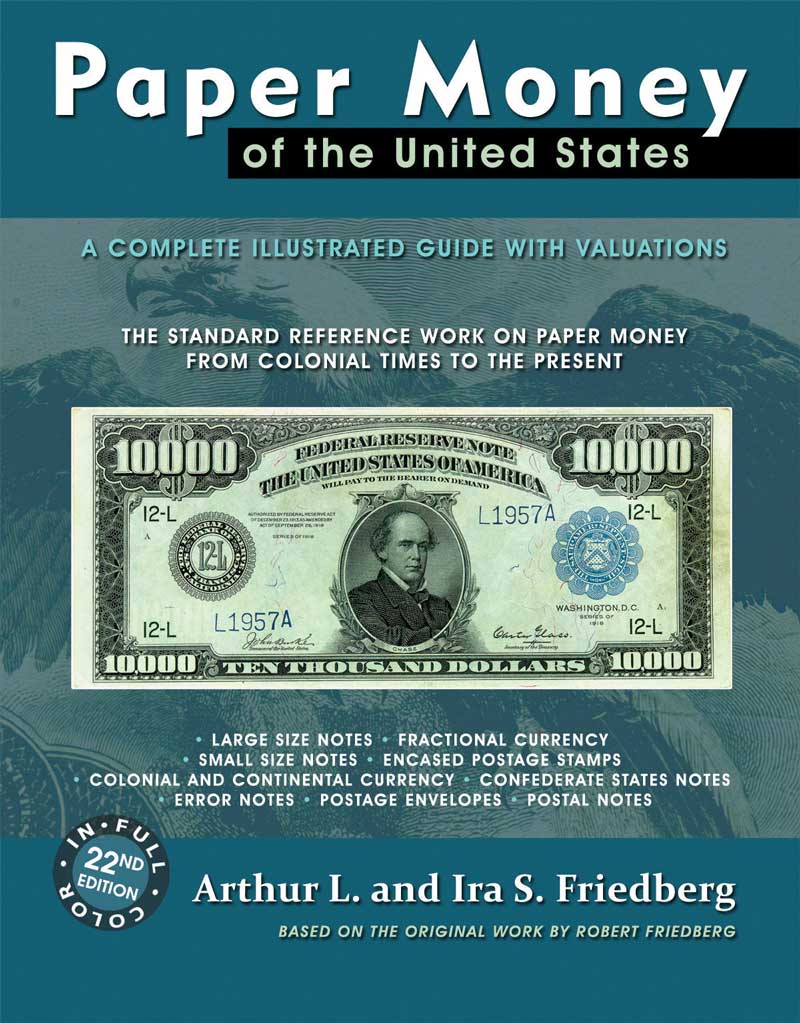 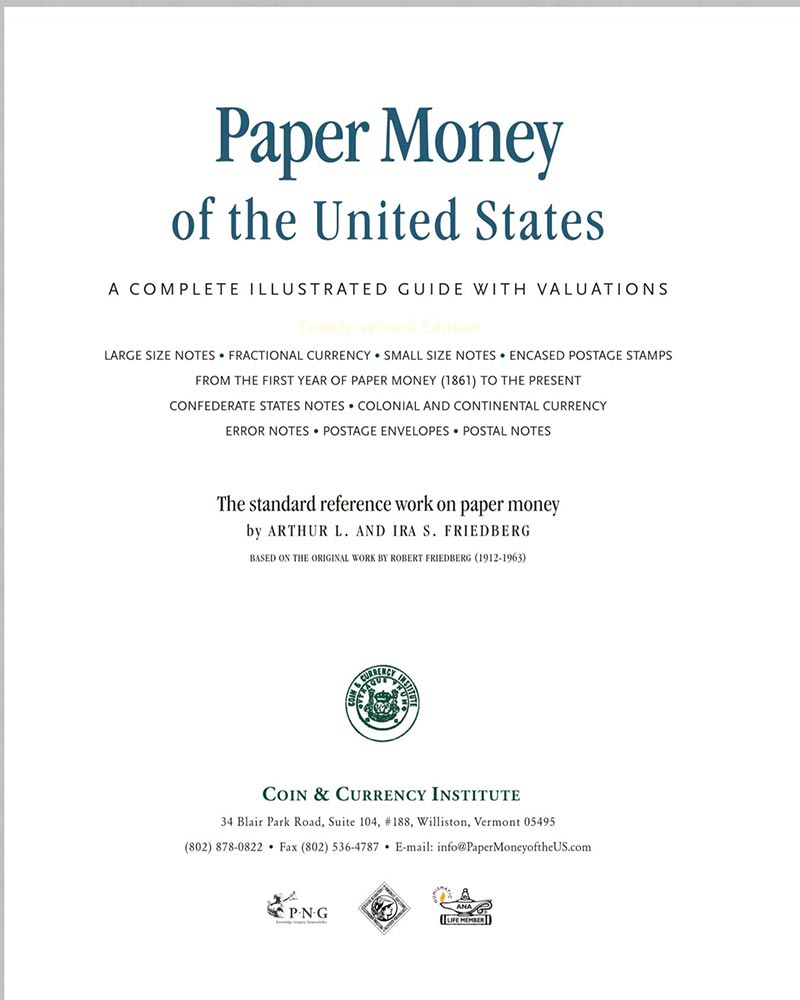 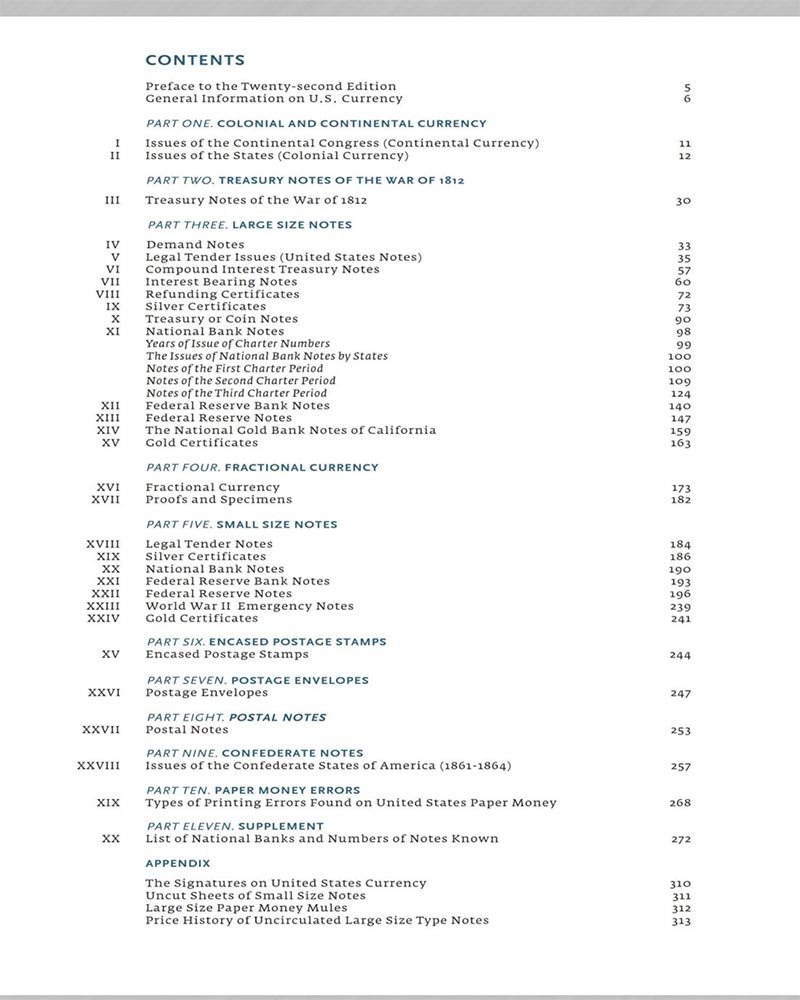 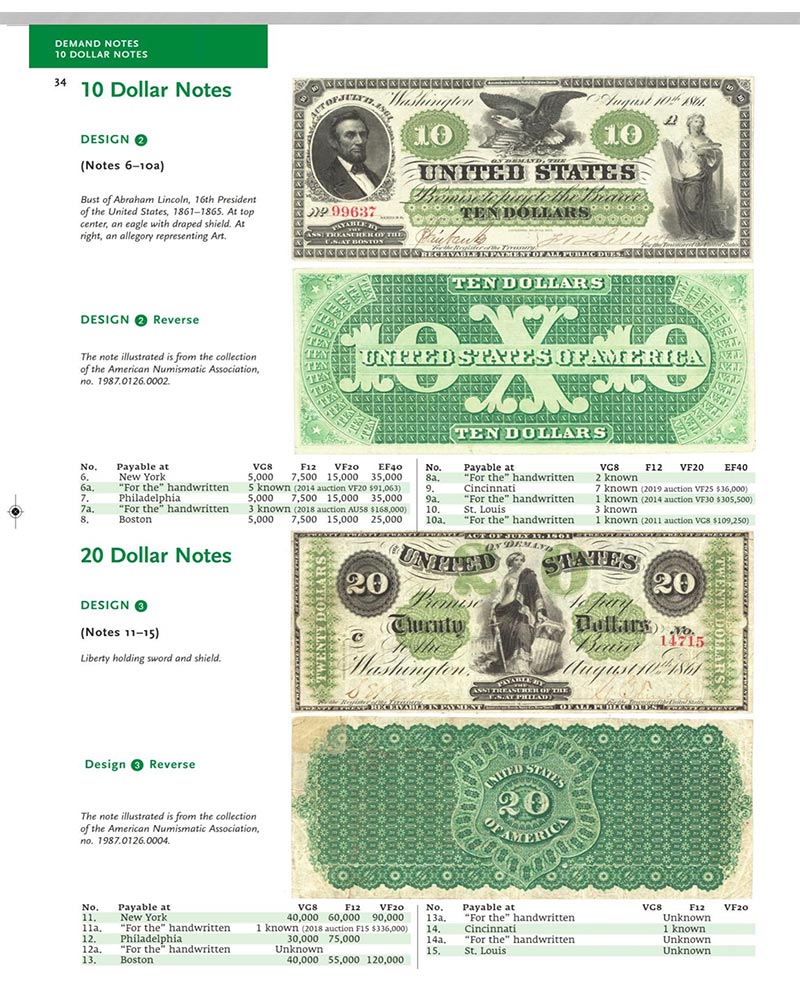 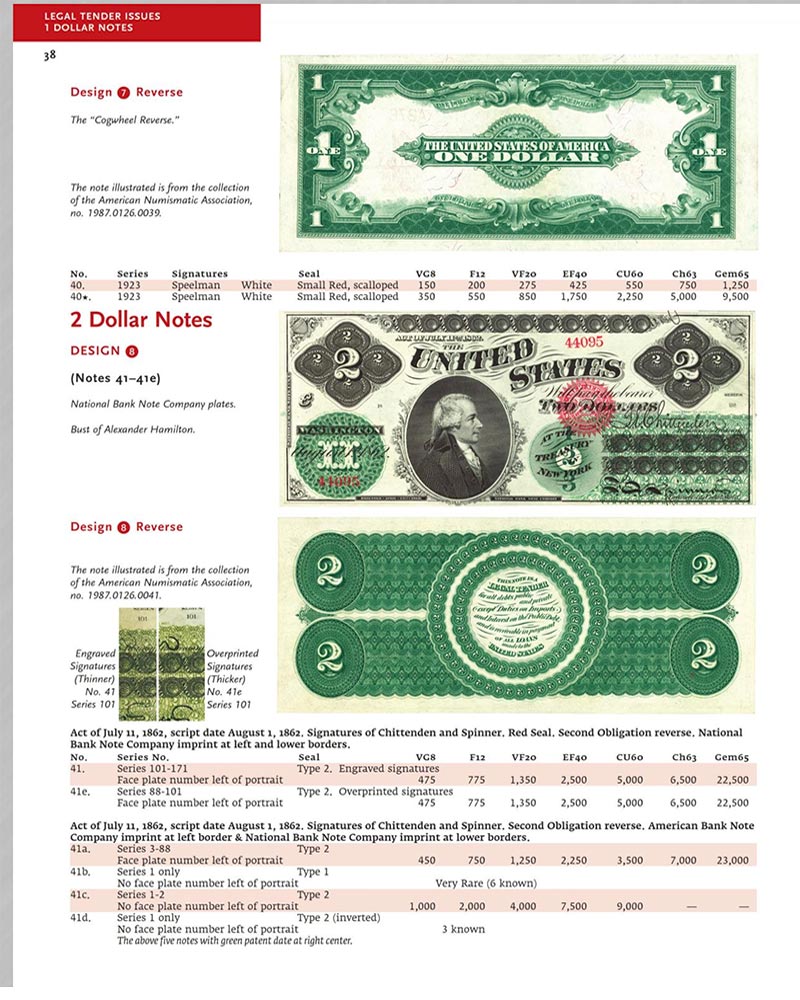 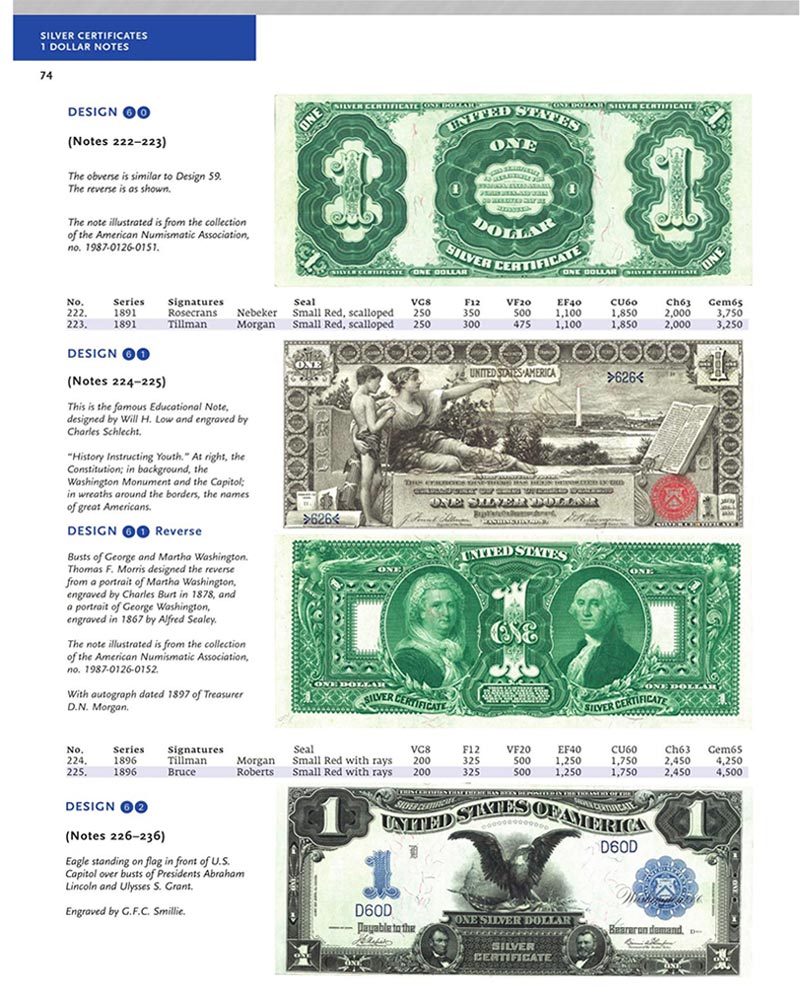 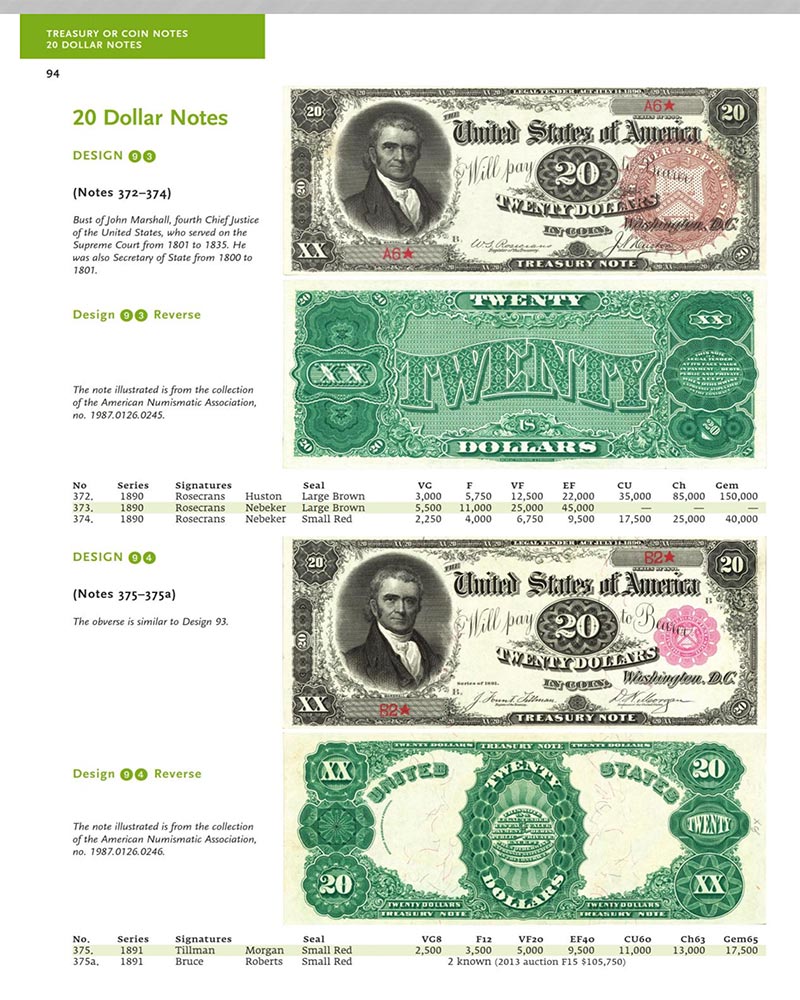 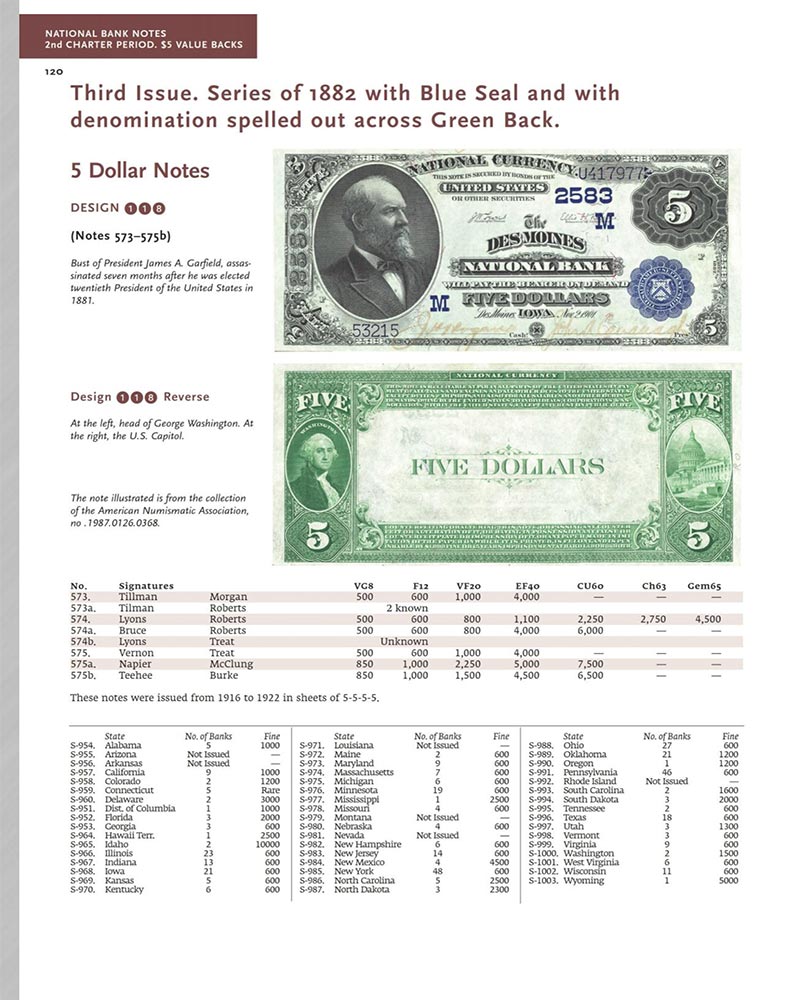 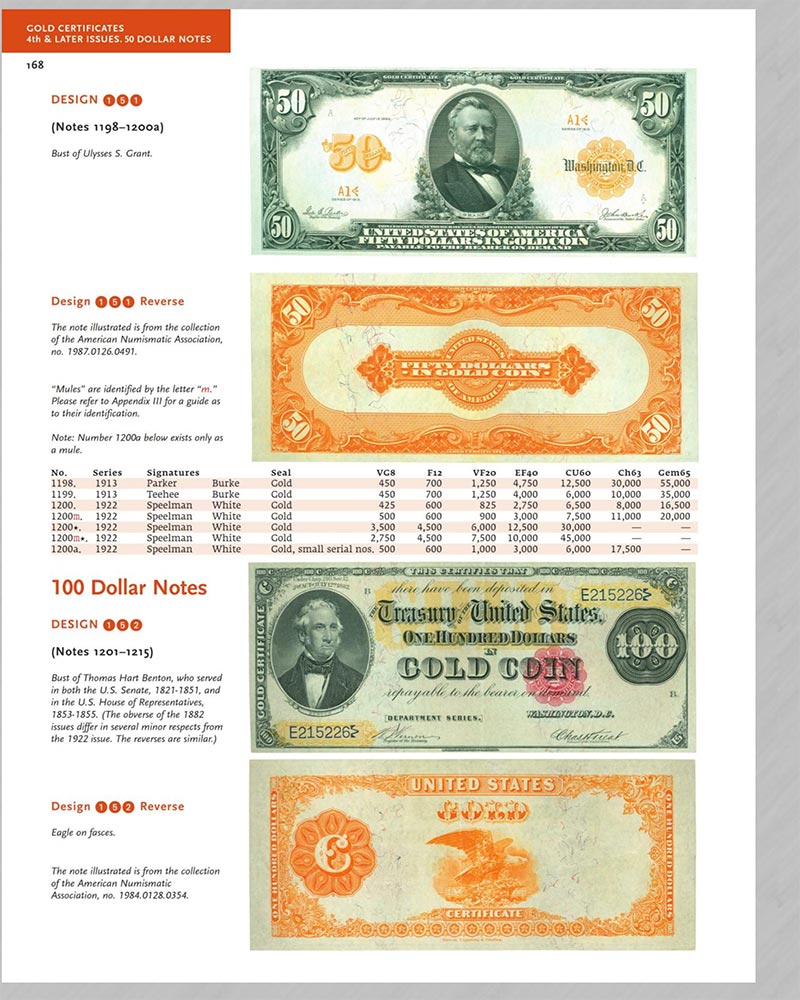 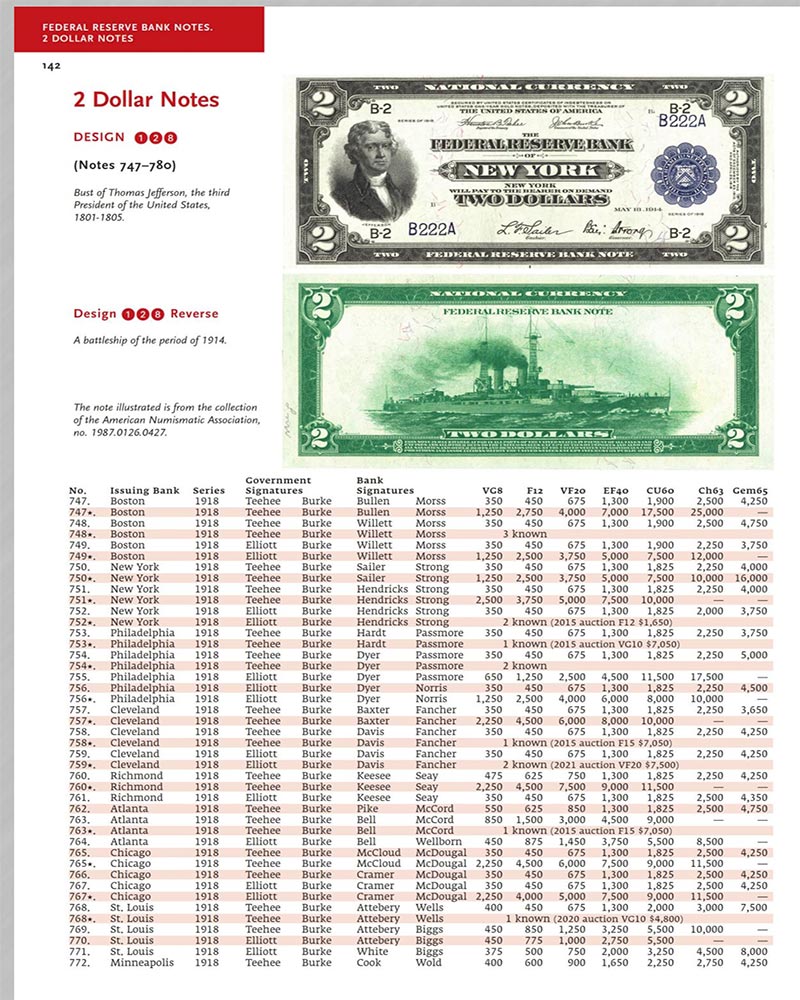 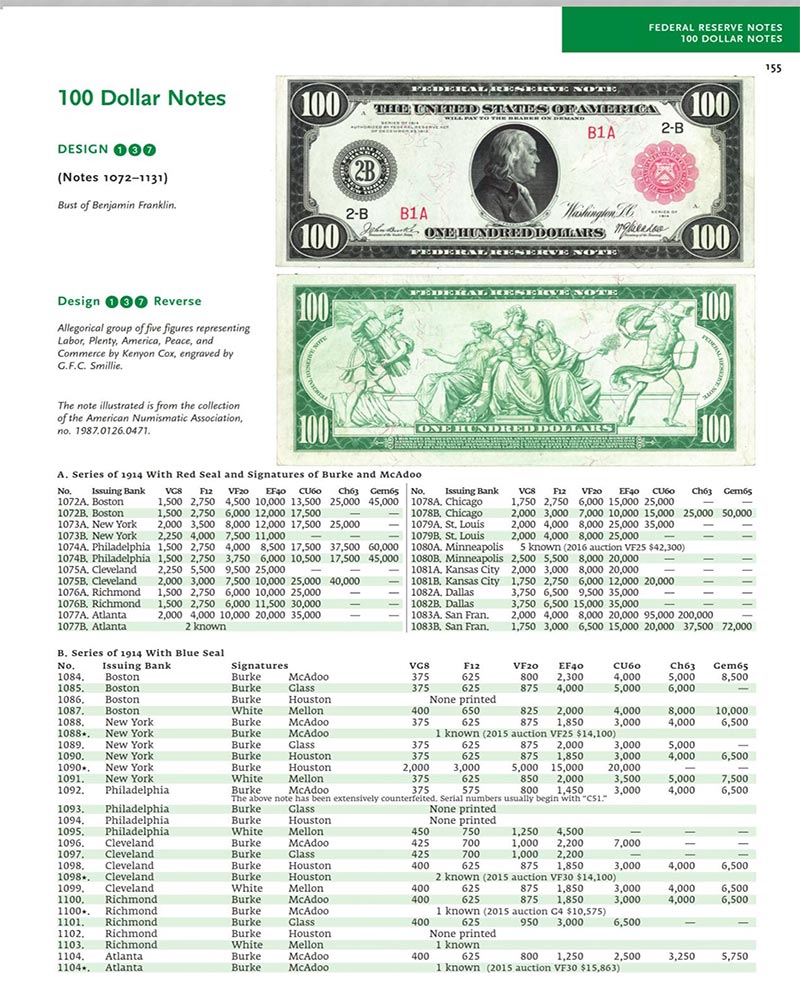 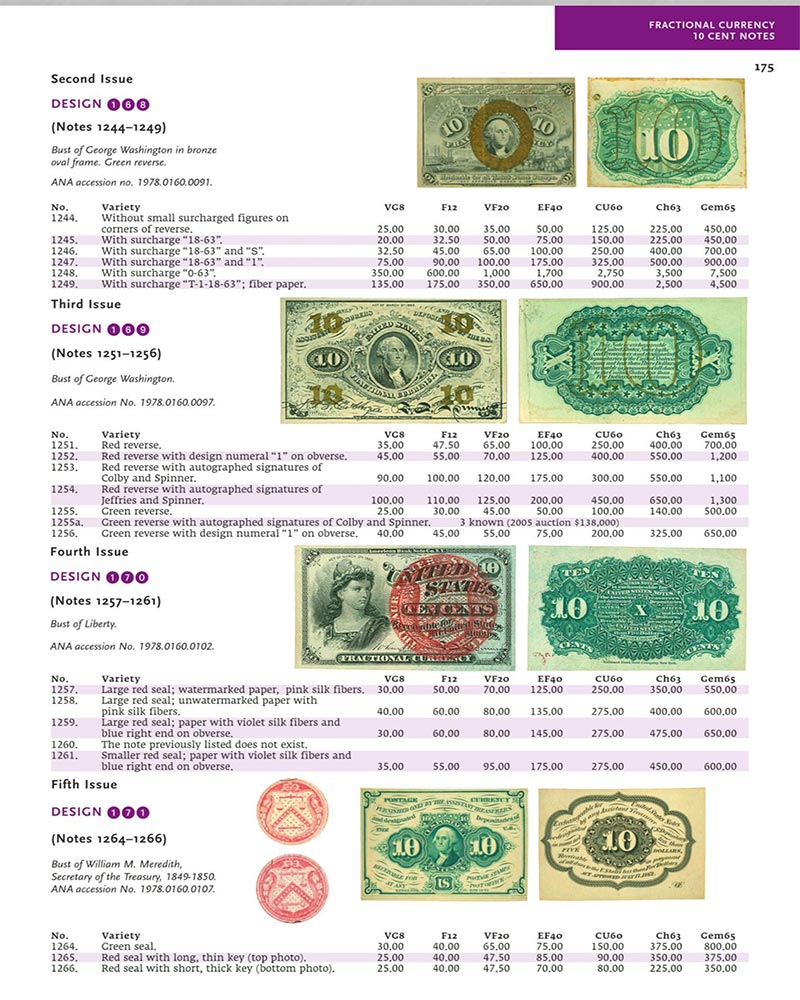 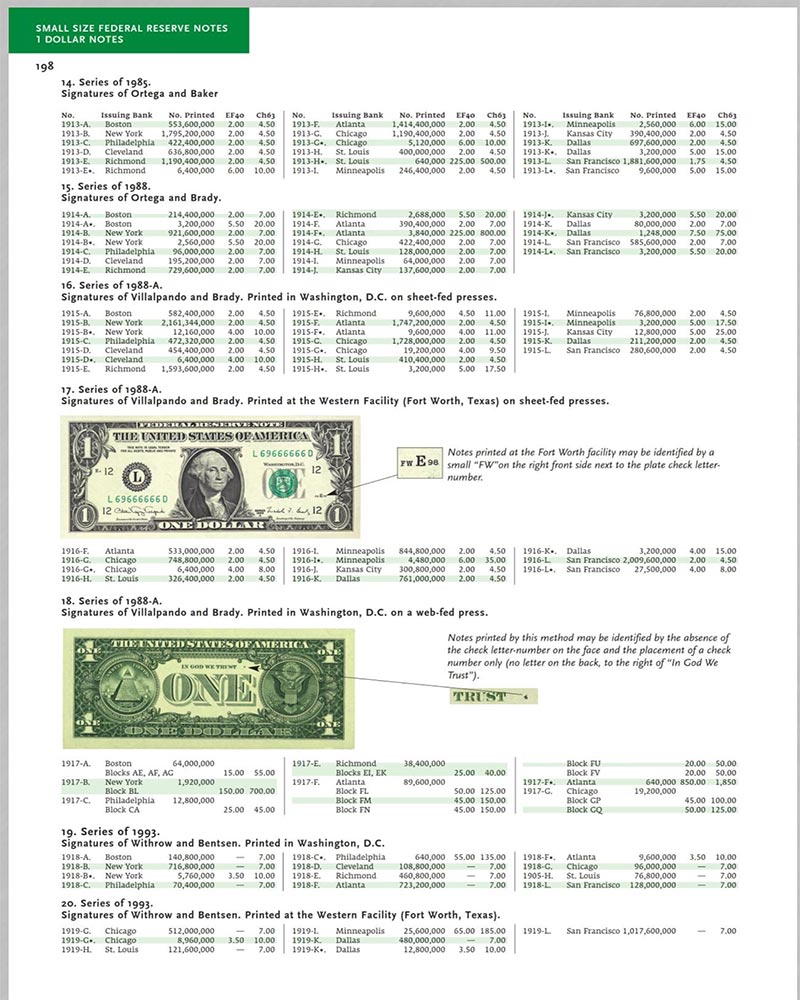 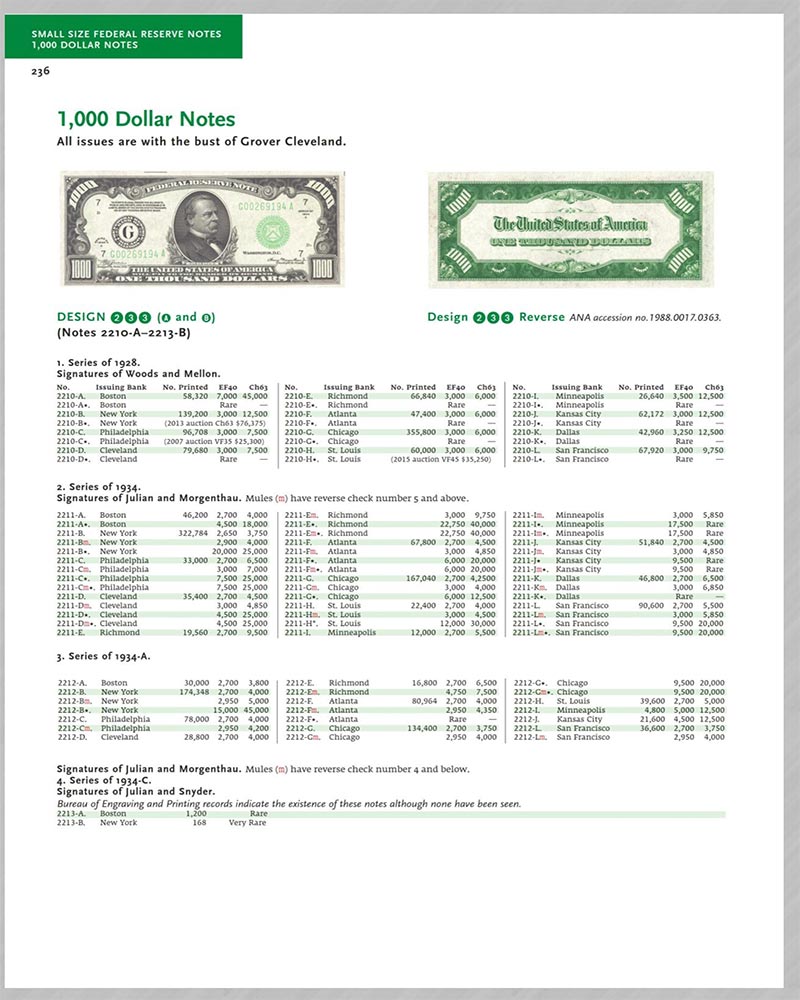 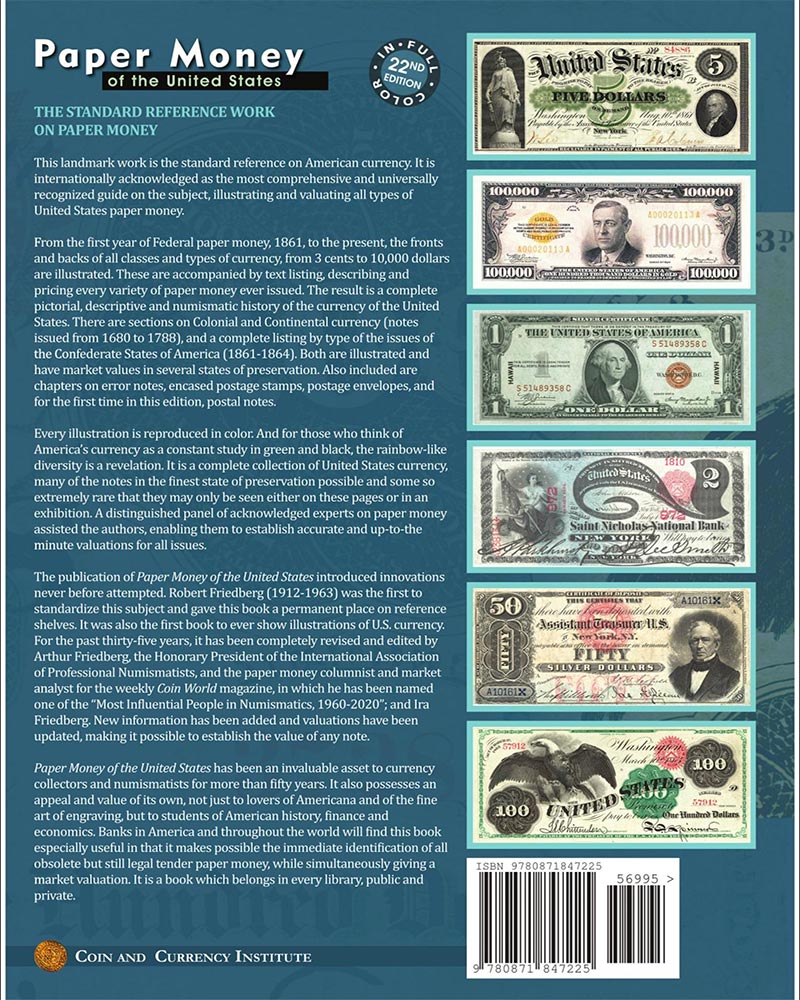 The 22nd Edition of the industry-standard reference book for U.S. Paper Money. A must-have companion for users of the Greensheet wholesale price guide.

This landmark work is the standard reference on American currency. It is internationally acknowledged as the most comprehensive and universally recognized guide on the subject, illustrating and valuating all types of United States paper money.

From the first year of Federal paper money, 1861, to the present, the fronts and backs of all classes and types of currency, from 3 cents to 10,000 dollars are illustrated. These are accompanied by text listing, describing and pricing every variety of paper money ever issued. The result is a complete pictorial, descriptive and numismatic history of the currency of the United States. There are sections on Colonial and Continental currency (notes issued from 1680 to 1788), and a complete listing by type of the issues of the Confederate States of America (1861-1864). Both are illustrated and have market values in several states of preservation. Also included are chapters on error notes, encased postage stamps, postage envelopes, and for the first time in this edition, postal notes.

Every illustration is reproduced in color. And for those who think of America’s currency as a constant study in green and black, the rainbow-like diversity is a revelation. It is a complete collection of United States currency, many of the notes in the finest state of preservation possible and some so extremely rare that they may only be seen either on these pages or in an exhibition. A distinguished panel of acknowledged experts on paper money assisted the authors, enabling them to establish accurate and up-to-the minute valuations for all issues.

The publication of Paper Money of the United States introduced innovations never before attempted. Robert Friedberg (1912-1963) was the first to standardize this subject and gave this book a permanent place on reference shelves. It was also the first book to ever show illustrations of U.S. currency. For the past thirty-five years, it has been completely revised and edited by Arthur Friedberg, the Honorary President of the International Association of Professional Numismatists, and the paper money columnist and market analyst for the weekly Coin World magazine, in which he has been named one of the “Most Influential People in Numismatics, 1960-2020”; and Ira Friedberg. New information has been added and valuations have been updated, making it possible to establish the value of any note.

Paper Money of the United States has been an Invaluable asset to currency collectors and numismatists for more than fifty years. It also possesses an appeal and value of its own, not just to lovers of Americana and of the fine art of engraving, but to students of American history, finance, and economics. Banks in America and throughout the world will find this book especially useful in that it makes possible the immediate identification of all obsolete but still legal tender paper money, while simultaneously giving a market valuation. It is a book which belongs in every library, public and private.

SHIPPING CHARGES: Books will be shipped no charge in the United States. Shipments to foreign addresses will be charged based on our actual cost.

Digital Access to the publication is only available via the greysheet.com web site and the Greysheet app for iOS and Android. Digital access does not include the ability to download the publication for archival purposes.. ***International orders excludes the printed version.

Contents of this book include full catalog details and pricing of: