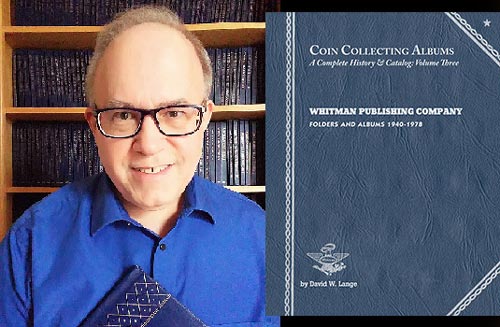 The first place award for The Heath Literary Award was presented to David W. Lange for "Birth of the Blue Folder"

The first place award for The Heath Literary Award was presented to David W. Lange for "Birth of the Blue Folder"

The literary awards – were presented during the Member and Awards Celebration at the Chicago World's Fair of Money® on Aug. 12.


The American Numismatic Association's 2021 literary awards – recognizing articles published in the 2020 volume of its official magazine, The Numismatist – were presented during the Member and Awards Celebration at the Chicago World's Fair of Money® on Aug. 12. The Numismatist was launched by ANA founder and first editor Dr. George F. Heath in 1888.

The Wayte and Olga Raymond Memorial Literary Award , endowed in 1978 by the late John J. Ford Jr., is presented for articles that display original and comprehensive research in U.S. numismatics.

The Prue and Arthur Fitts Literary Award for Ancient and Medieval Coinage Studies recognizes literary excellence in those fields.

All feature articles published in The Numismatist automatically are considered for the Heath Literary Award; likewise, all qualifying articles are evaluated for the Raymond, Sheehan and Fitts Awards. For information about submitting manuscripts for review and possible publication, email Editor-in-Chief Caleb Noel at cnoel@money.org .

The 2021 ANA Young Numismatist (YN) Literary Awards were announced Thursday, August 12, at the ANA Member & Awards Celebration at the World's Fair of Money in Chicago. The three award categories are generously funded by Whitman Publishing and named after authors dedicated to educating the next generation of numismatists.

The Q. David Bowers Young Numismatist Literary Award honors numismatist writers that are aged 13 to 17. This year's first place recipient was Christopher Buchanan for "Third Times the Charm." Paige Price placed second with "Why We Won with West Point," and Alexandre Bojko took third with his paper "An Analysis of Jacksonian Banking Policies & Politics through the Study of Hard Times Tokens."

The Kenneth E. Bressett Young Numismatist Literary Award is given to writers between the ages of 18 and 22. This year, first place was won by William Cather for "The Coinage Act of 1783: The Crime of the Century."

The first-place winners received a $500 cash prize, plus a $500 voucher with which to build a personal library of numismatic books produced by Whitman Publishing. Second- and third-place winners received book vouchers for $200 and $100, respectively. To learn more about this program, visit money.org . Select "Awards" from the "Community" dropdown menu.