Paper Money Guaranty® recently certified a group of seven of the greatest uncut sheets of US banknotes in existence. The seven sheets highlight the Monarch Collection, a phenomenal collection of US paper money carefully curated by a collector decades ago, before the advent of paper money certification. 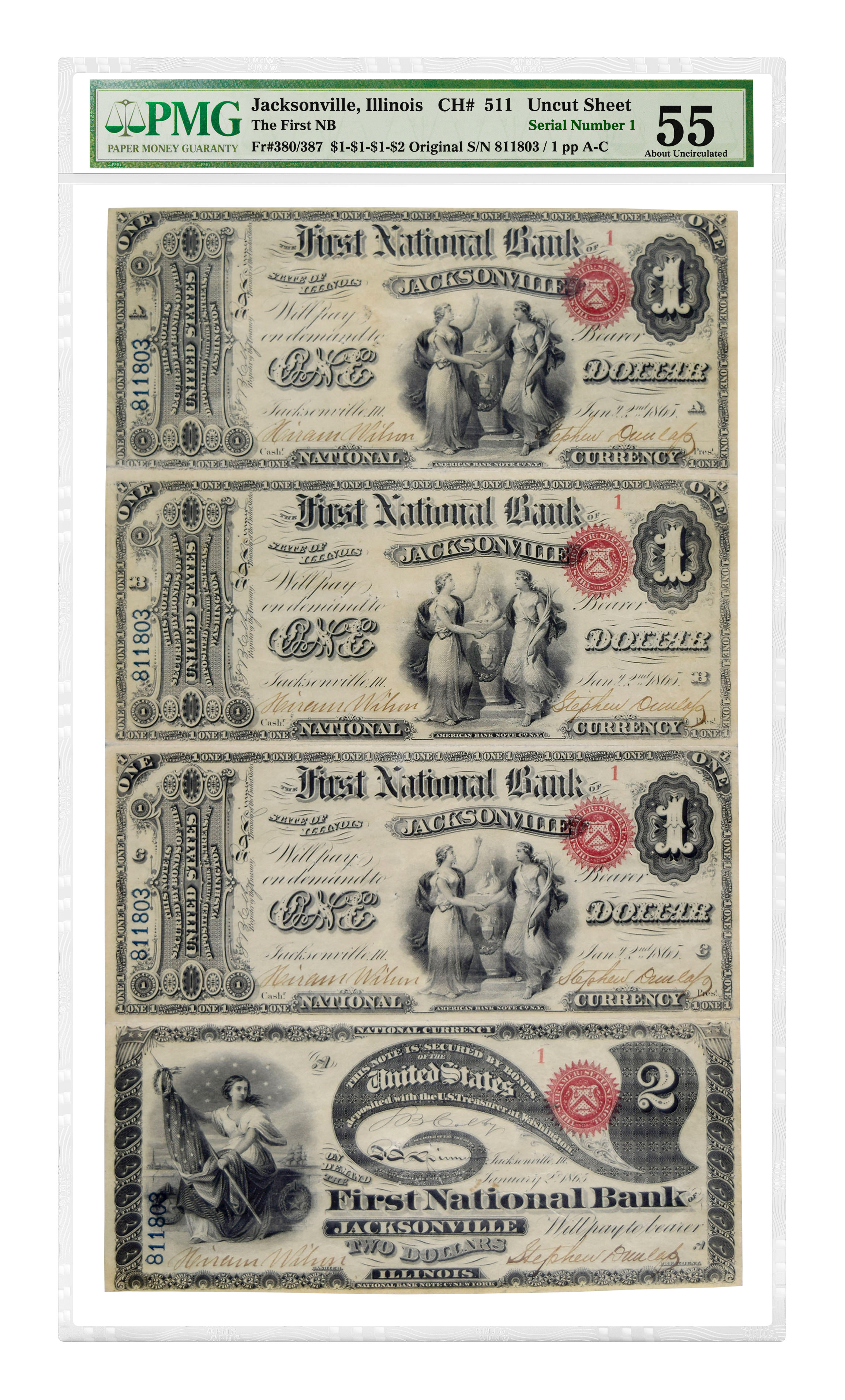 SARASOTA, Fla. (March 5, 2020) – Paper Money Guaranty® (PMG®) recently certified a group of seven of the greatest uncut sheets of US banknotes in existence. The seven sheets highlight the Monarch Collection, a phenomenal collection of US paper money carefully curated by a collector decades ago, before the advent of paper money certification.

The Monarch Collection also includes five uncut sheets with an extraordinary provenance traced to 1923, when they were set aside by special request for Register of the Treasury Harley V. Speelman, whose signature appears on the notes. This quintet features uncut sheets of two of the most iconic US notes: the $10 Bison and the $5 Chief.

The final sheet in the Monarch Collection is a unique 1896 Educational Series $1 sheet. Its design is considered to be one of the most beautiful in all of US paper money.

Banknotes are printed in sheets, which are then cut into individual notes for circulation. Uncut sheets of Large Size banknotes, which were issued from 1861 to 1928, were almost unobtainable at the time, making them extremely rare—and highly sought after—today. Together, the group of seven uncut sheets in the Monarch Collection represents some of the most important treasures from the Large Size era of US banknotes.

The incredible 1865 Serial Number 1 National Bank Note sheet was part of the original series of National Bank Notes authorized by the federal government amid currency pressures during and after the Civil War. Issued by the First National Bank of Jacksonville, Illinois – a city just west of the capital of Springfield – it features three $1 notes and one $2 note. 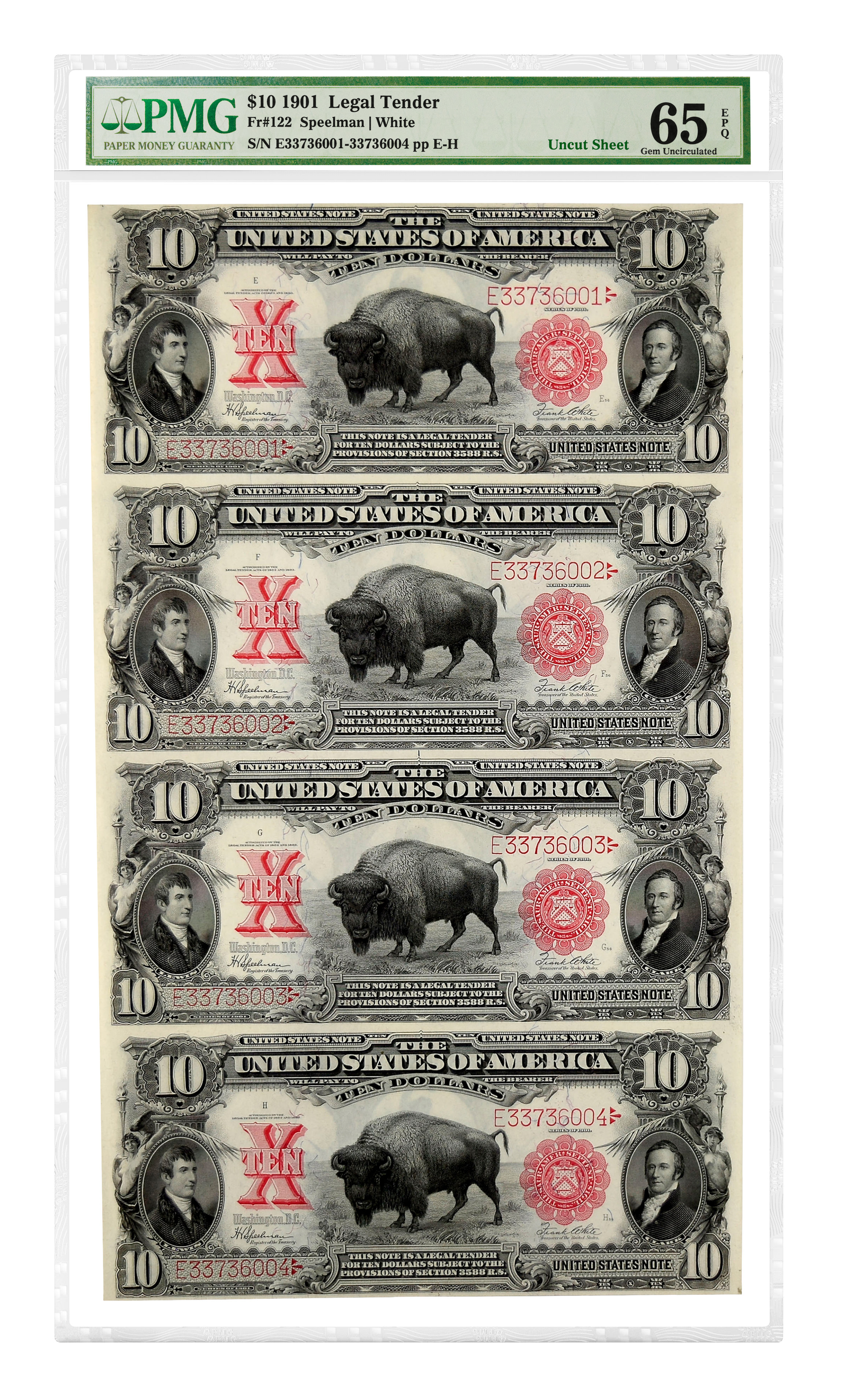 Both the $1 and $2 designs are highly regarded by paper money collectors. The front of the $1 shows an image of Concordia (two figures shaking hands), while the front of the $2 shows “Stars and Stripes” to the left of a large “2” rotated 90 degrees counterclockwise to rest on its side. This gives rise to its numismatic nickname: “Lazy Deuce.” The backs each feature elegant scenes: the “The Landing of the Pilgrims” on the $1 and Sir Walter Raleigh with a long pipe on the $2.

After scouring census and auction data, PMG researchers concluded that this is the only known uncut sheet of National Bank Notes for the $1-$1-$1-$2 configuration with all notes bearing a bank serial number 1. The three $1 notes show the plate positions A, B, C, respectively, and the $2 shows an A plate position (since it is a different denomination).

The five Speelman sheets in the Monarch Collection have been kept together for nearly 100 years. After Speelman, they passed through the hands of great numismatists including “Colonel” E.H.R. Green, F.C.C. Boyd, John J. Ford Jr. and Herman Halpern. They were first offered publicly at a Stack’s auction of selections from the Halpern Collection in March 1993.

The Stack’s catalog for that sale traced the release of each of the five uncut sheets to deliveries of batches of banknotes from the Bureau of Engraving and Printing (BEP) to the Treasury Department in 1923. The batches were accompanied by instructions for each uncut sheet to be set aside for Speelman, who served as Register of the Treasury from 1922 to 1927. The sheets feature his signature along with that of Frank White, the Treasurer of the United States at the time. 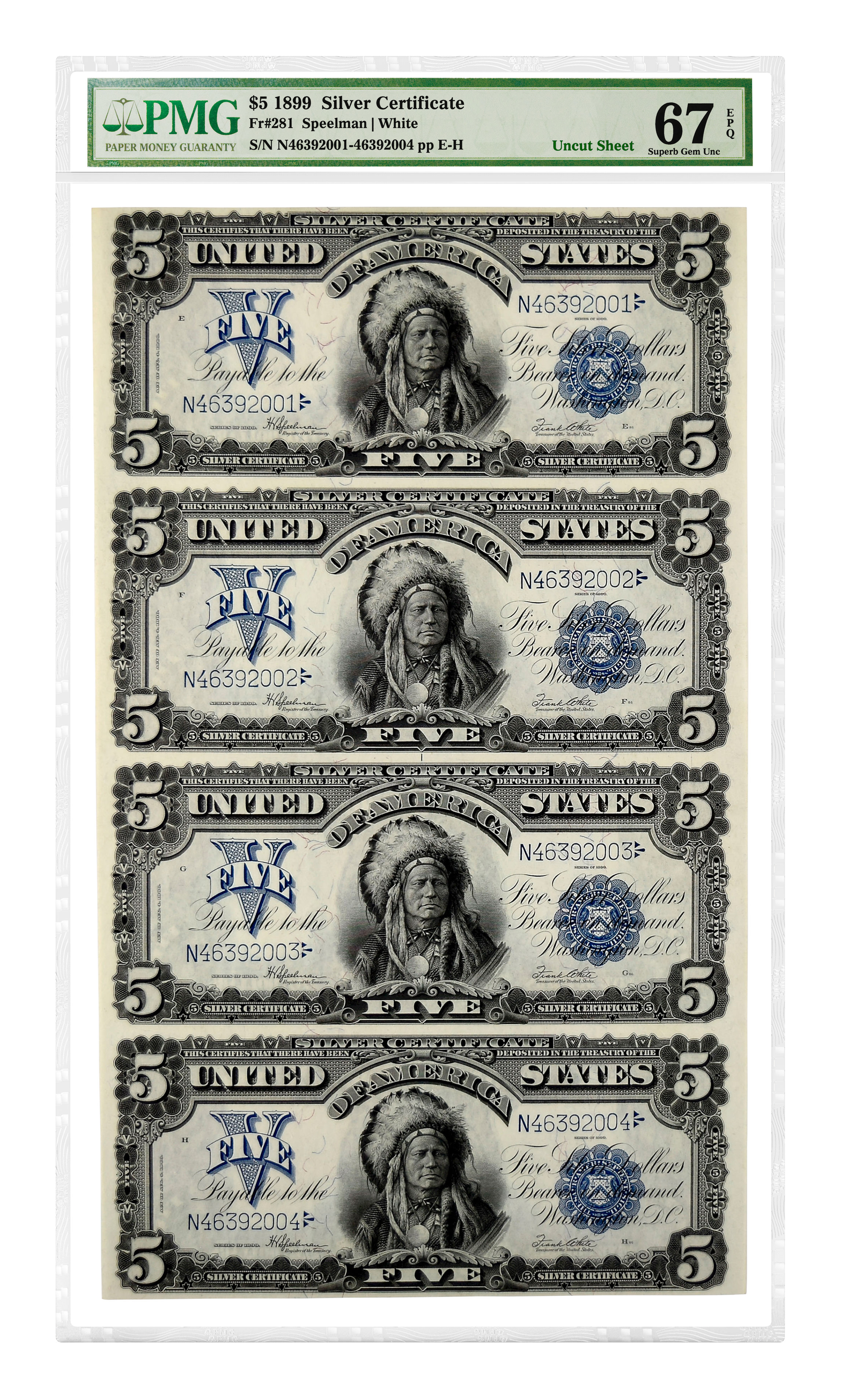 Four of the five sheets represent the last issuance of their series, and Speelman undoubtedly appreciated their historical significance.

The fantastic 1901 $10 “Bison” Legal Tender Notes sheet in the Monarch Collection is graded PMG 65 Gem Uncirculated EPQ. The front shows explorers Lewis and Clark at the edges of the note, surrounding the bison that gives these notes their nickname. PMG Grading Finalizer Matt Quinn said: “The sheet is so original and bright that it seems as if it just came out of the BEP.”

The 1901 Bison series was replaced with the 1923 series that features Andrew Jackson. In US paper money, the date of the notes does not change until the design changes (or, in the modern era, the signatures change).

The 1993 Stack’s catalog noted that the only other Bison uncut sheet ever offered at auction is permanently off the market, making this one unique in private hands.

This next sheet is also an example of an iconic design in US paper money. The 1899 $5 Silver Certificates feature an image of a Native American Chief on the front, which led to the nickname of “Chief Note” among collectors.

The grade of this sheet is simply astonishing: PMG 67 Superb Gem Uncirculated EPQ. This grade is so rare for this design that this sheet is tied with just two individual notes for the top spot in the PMG Population Report.

The Monarch Collection sheet is unique in private hands as the only other example, a Parker-Burke signature combination, is forever ensconced within the Bebee Collection of the American Numismatic Association.

The series 1899 $5 Silver Certificate was replaced by the series 1923 “Porthole Note,” which bears an image of Abraham Lincoln within a circular frame. 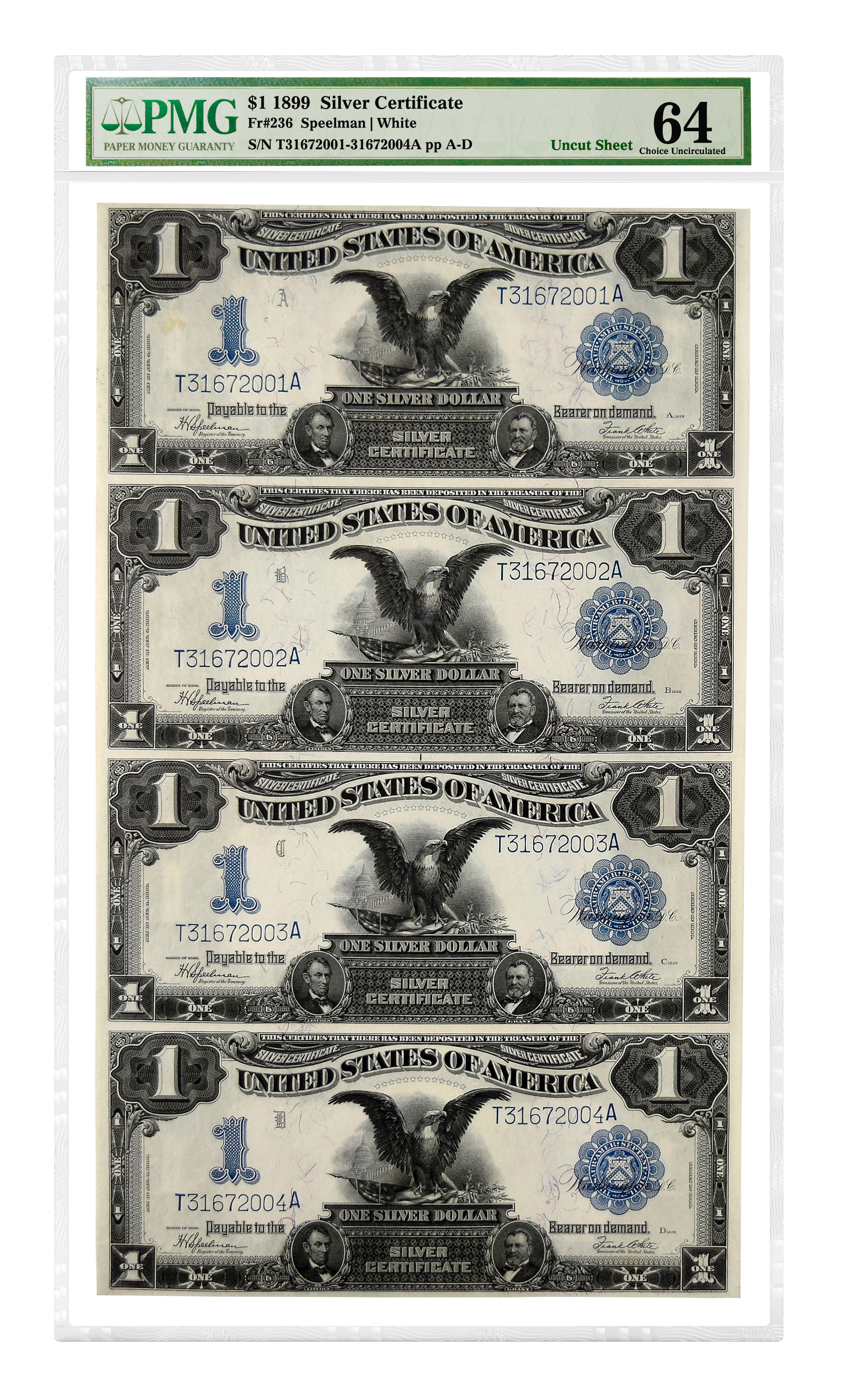 Another uncut sheet of an 1899 series, of $1 Silver Certificates, is graded PMG 64 Choice Uncirculated. This series shows an eagle perched on an American flag and is known to numismatists as the “Black Eagle” design. Although a number of 1899 $1 sheets are known with earlier signature combinations on this design, this Speelman-White sheet is unique in collector hands.

The 1899 Black Eagle series was replaced in 1923 with a design of George Washington, who has appeared on US $1 notes ever since.

The final two Speelman-White uncut sheets are the 1917 $1 and $2 Legal Tender designs, each graded PMG 64 Choice Uncirculated EPQ. The $1 notes depict the timeless portrait of George Washington at center with the “Columbus in Sight of Land” scene at left. The $2 notes—the last $2 notes of the Large Size era—feature Thomas Jefferson and show a stunning engraving of the US Capitol Building with a small scalloped treasury seal at right.

All five Speelman-White sheets contain the “Col.” Green pedigree. Sadly, the Stack’s catalog notes: “Green is known to have had numerous other unique Large Size sheets, all destroyed by the cellulose nitrate holders in which he kept them. It is likely, purely by chance, these five sheets were kept in different holders since they were obtained in one separate transaction.”

Rounding out the remarkable group of seven uncut sheets is one of 1896 $1 Silver Certificates graded PMG 55 About Uncirculated. Its front shows “History Instructing Youth” with an image of Washington, D.C., in the background. The reverse features George and Martha Washington. Called the Educational Series, this design is considered to be among the most beautiful of all US banknotes. 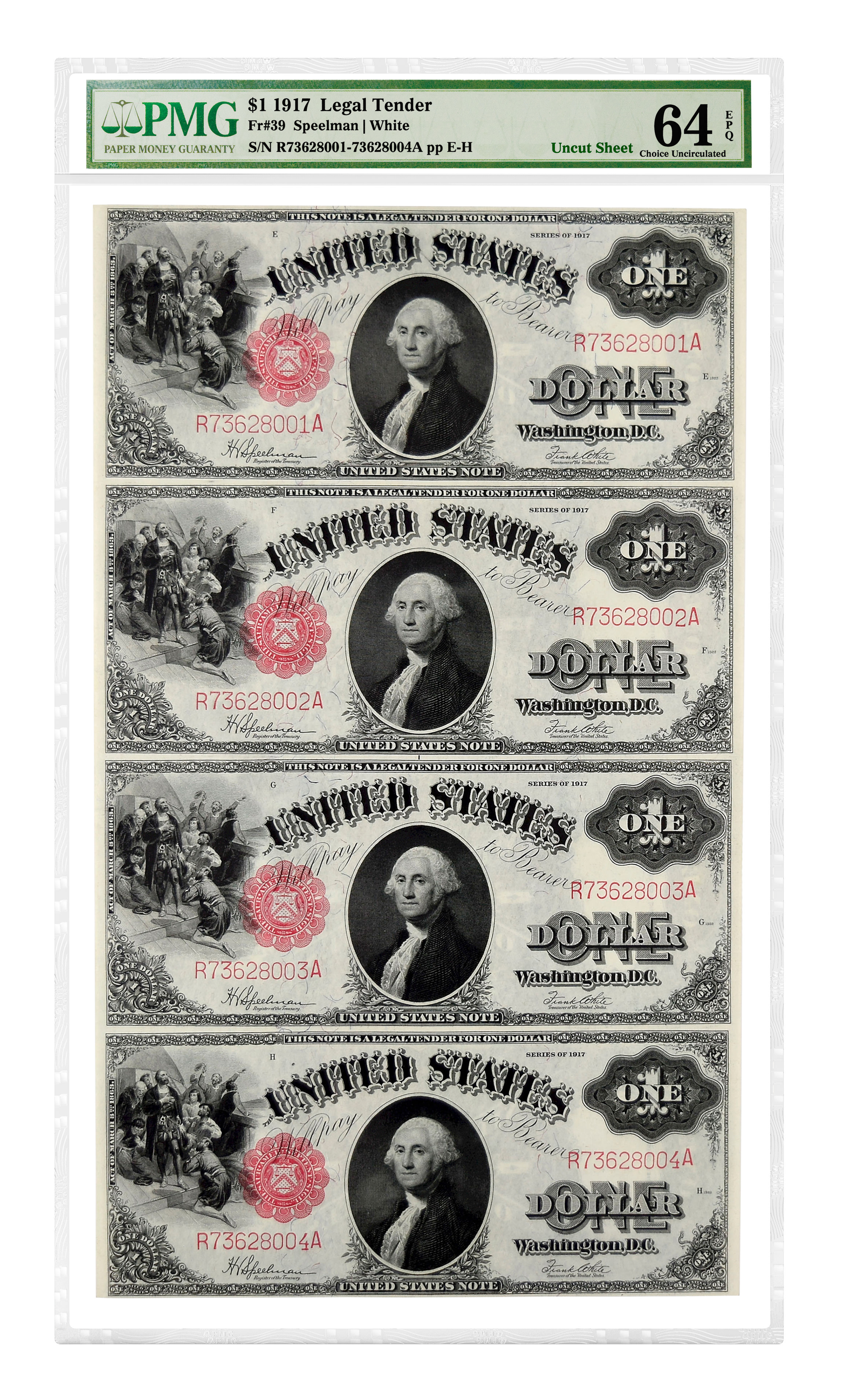 This 1896 series was short-lived but still produced two signature combinations, with this uncut sheet featuring the second: Bruce-Roberts. An estimated four other 1896 $1 Educational Series sheets are known but they all exhibit the first signature combination for the design: Tilman-Morgan. As a result, the Monarch Collection’s sheet is believed to be unique.

Blanche Bruce was Register of the Treasury from 1881 to 1885 and again for a three-month period in 1897-1898. Born a slave, Bruce served as a US Senator from Mississippi from 1875 to 1881 and was the first African-American to preside over the Senate. The other signer, Ellis Roberts, served as Treasurer of the United States from 1897 to 1905. 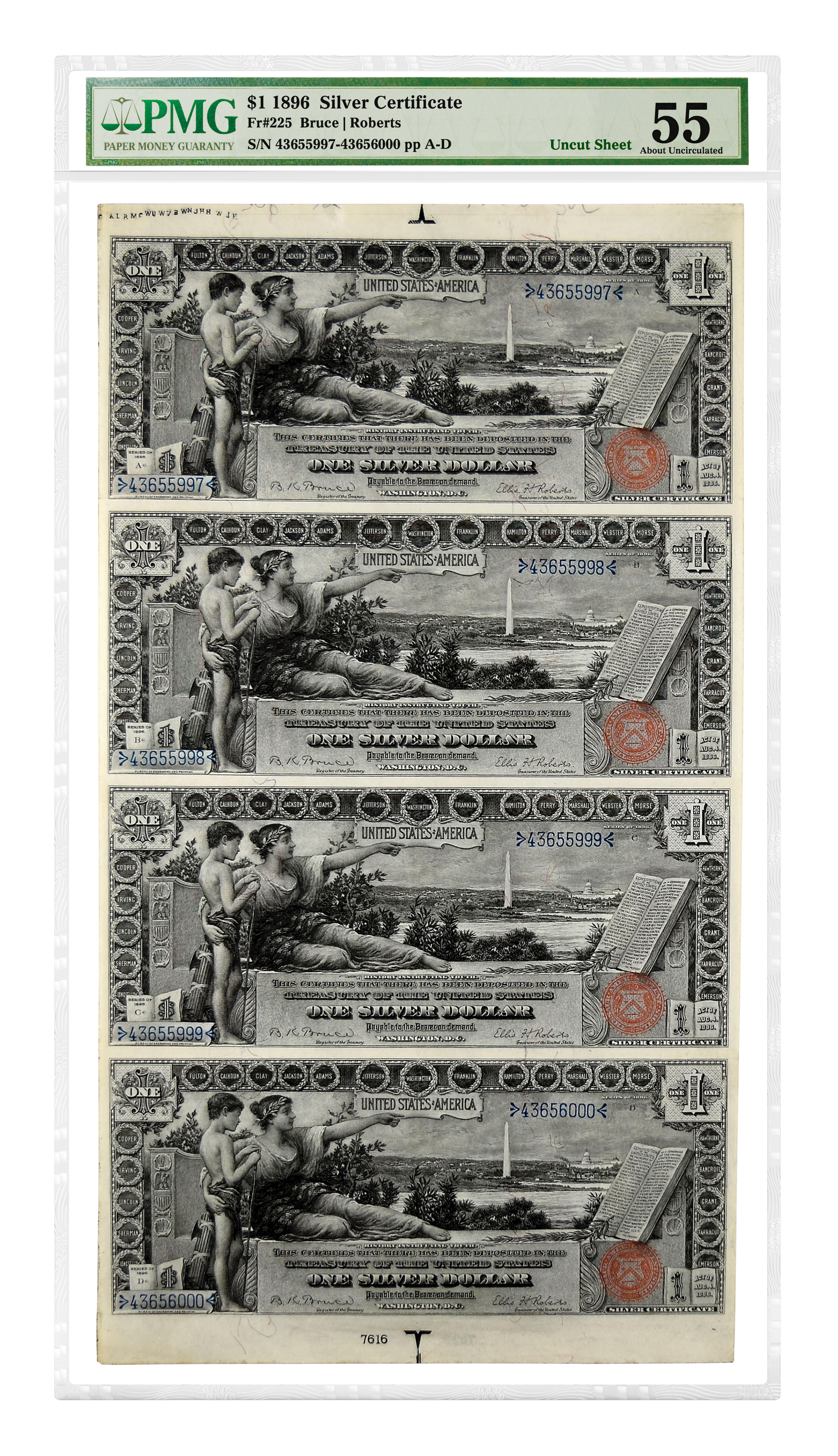 “The sheets in the Monarch Collection are perfect examples of why people collect: They are stunningly beautiful, they are historic and they are exceedingly rare,” said Mark Salzberg, PMG Chairman. “These uncut sheets are among the most important collectibles in all of American numismatics, and it is truly an honor for PMG to have been entrusted to certify them.”

The owner of the Monarch Collection has not yet announced plans for this phenomenal group of sheets or the other notes in the collection. 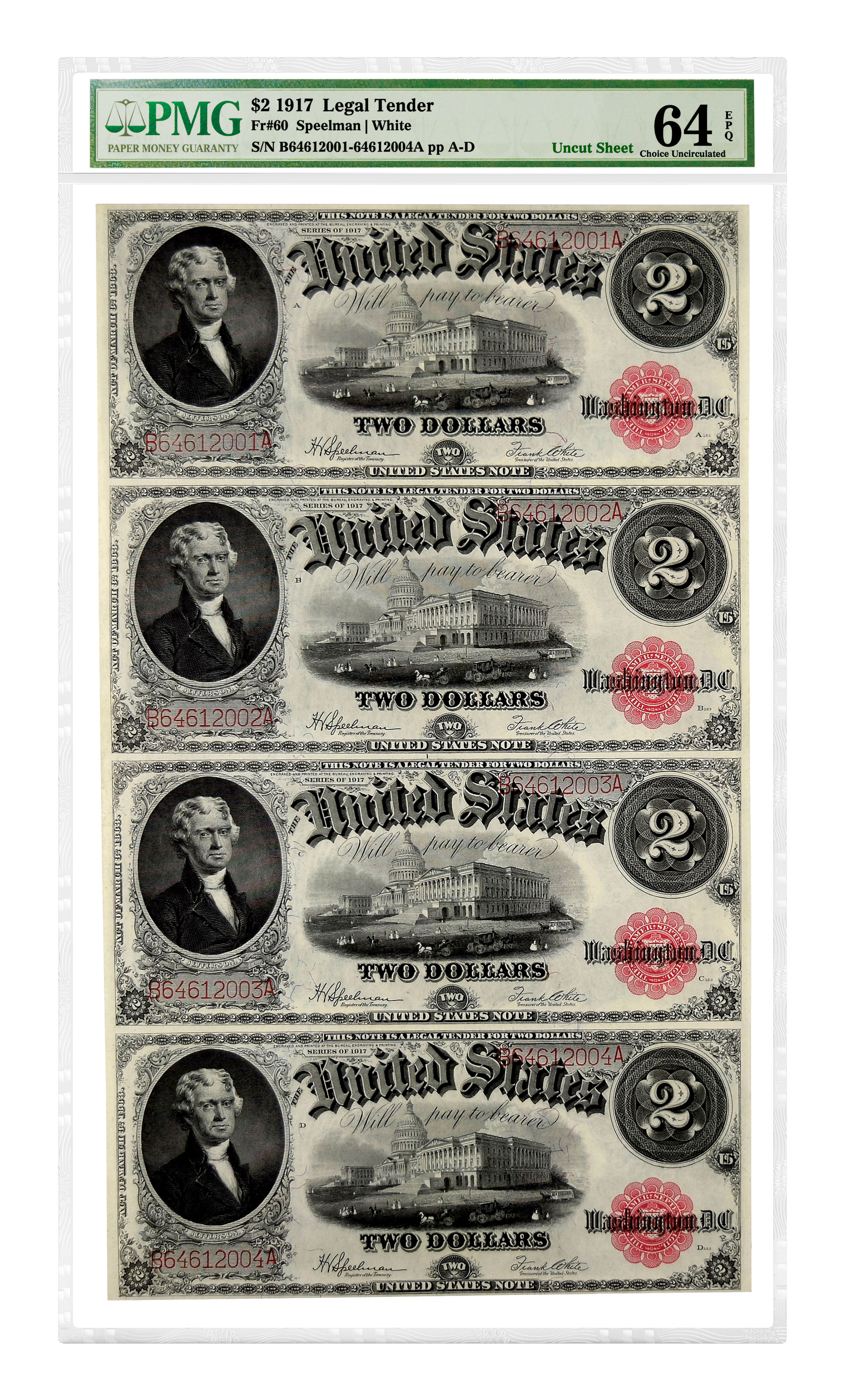