The August auction has been finalized and is posted on their website StacksBowers.com. 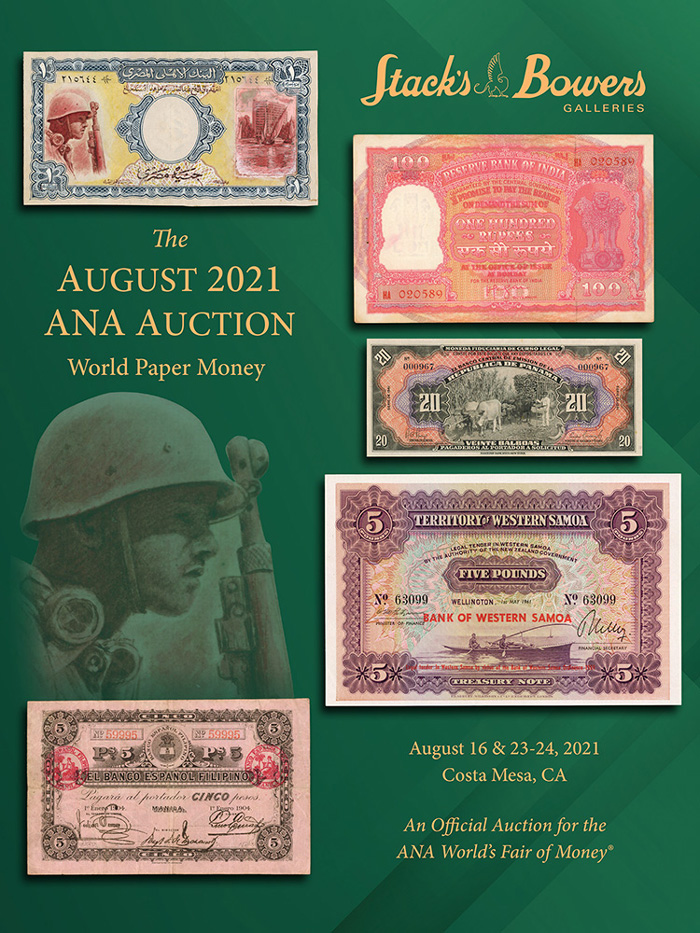 The sale is slated to take place August 16, 2021 at 10:00 AM PDT in the brand new Griffin Studios facility located at the Stack’s Bowers Galleries headquarters

The sale is slated to take place August 16, 2021 at 10:00 AM PDT in the brand new Griffin Studios facility located at the Stack’s Bowers Galleries headquarters

Costa Mesa, CA -- Stack’s Bowers Galleries has announced that their August ANA World Paper Money Sale has been finalized and is posted on their website StacksBowers.com. With the bidding now open, collectors have the opportunity to add treasures to their collections as many critical and heavily collected areas of World Paper are represented in the offering.

The sale is anchored by a few named collections, including the Panama Collection that features four lots of Panamanian Banknotes, all of which are the highest graded in uncancelled and issued form (lots 30366, 30668, 30370, and 30371). These notes collectively are estimated to fetch well above $100,000, and are available for the first time to the public. When asked for his comments on the set, Aris Maragoudakis, the firm's Director of World Paper Money, stated, “While we have been fortunate to handle the majority of the higher end Panama notes that have hit the market in recent years, this set stands out as remarkable for its incredible preservation. The 1, 5, and 10 Balboas in gem condition are next to impossible to find, and it’s going to be interesting to see the collecting community fight to upgrade their sets. Also, the 20 Balboa in its original state, uncancelled, and with exceptional paper quality, which is virtually unheard of.”

The Don Allen Collection offers significant Australian and Western Samoan pieces as well as to some significant pieces from British Guiana, British Honduras, and other areas of the Commonwealth. The Bank of Adelaide 1 Pound in lot 30011, and the Commonwealth of Australia 5 Pounds in lot 30012 are among the more noteworthy items in the collection.

One of the most unique collections to be offered by Stack’s Bowers Galleries, is the Ricardo Collection, a privately built collection formed entirely without purchases from dealers, or auction houses. The collection, which took decades to build, was built primarily by dealing directly with banks and governments, or trading with collectors in various countries that were visited by the consignor. Part I of this collection covers the areas of Bolivia, Colombia, Iran, Iraq and Russia. A multitude of additional countries will be offered in future sales. Aris Maragoudakis added, “The fascinating collecting method that built The Ricardo Collection led to a passionately built assortment of paper that spanned the globe, with an astounding focus on organization, quality, and completion.”