4 Valuable Roosevelt Dimes Worth Looking For In Circulation

Roosevelt dimes have been in production since 1946, and this long-running series is generally affordable – most dates are easily obtainable in circulated and typical uncirculated grades. However, there are several Roosevelt dimes that are relatively scarce and are worth a pretty penny. With enough looking, these valuable Roosevelt dimes can be found in circulation. 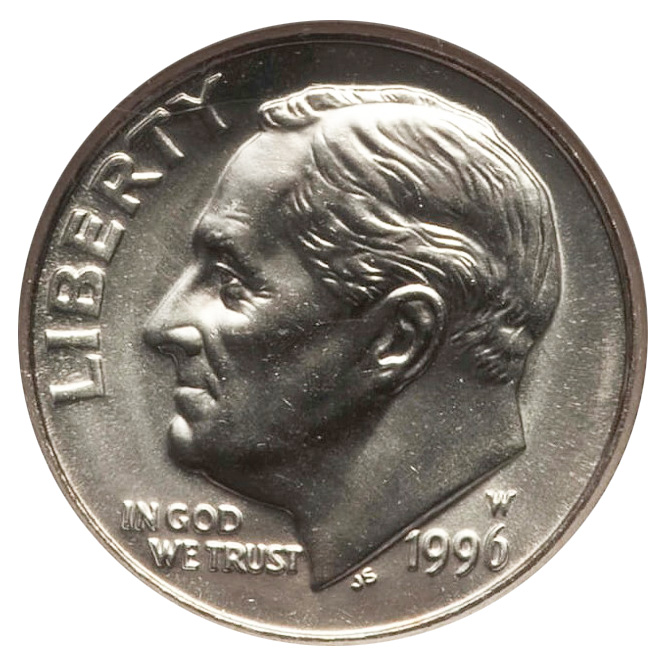 4 Valuable Roosevelt Dimes Worth Looking For In Circulation

Roosevelt dimes have been in production since 1946, and this long-running series is generally affordable – most dates are easily obtainable in circulated and typical uncirculated grades. However, there are several Roosevelt dimes that are relatively scarce and are worth a pretty penny. Even better? With enough looking, these valuable Roosevelt dimes can be found in circulation.

Here’s a rundown of the 4 valuable Roosevelt dimes you should keep your eyes out for in pocket change and rolls:

This transitional error coin was struck when the United States Mint was moving from the production of 90% silver Roosevelt dimes to making the ten-cent coin from copper-nickel clad. The 1964 clad Roosevelt dime is a rare coin with only a handful of specimens, and these are worth four figures or more. How do you tell a 1964 clad dime from a regular 90% silver 1964 dime? Weigh it! A 1964 clad dime weighs 2.27 grams (more or less).

Another mid-1960s transitional error, the 1965 silver Roosevelt dime is a rare and valuable piece with only a few known examples. Some examples have sold for $7,000. It’s easy to tell 1965 silver dime from a normal clad 1965 dime with use of a scale that can measure in increments of hundredths of a gram. A 1965 silver dime should register at 2.50 grams.

The “P” mintmark first appeared on Roosevelt dimes in 1980, but apparently some 1982 dimes struck at the Philadelphia Mint didn’t get the message! A number of 1982-dated Philly Roosevelt dimes were struck by an obverse die that didn’t receive a “P” mintmark. These are occasionally found in circulation, and they’re worth the extra bit of searching… 1982 no-P Roosevelt dimes are worth about $65 apiece or more. [Learn More about 1982 No-P Roosevelt Dimes]

The West Point Mint struck 1996 Roosevelt dimes as a “surprise” offering in 1996 uncirculated sets to celebrate the 50th anniversary of the popular dime series. While 1996-W dimes weren’t issued for circulation, many years have passed since these special collectibles were made, and with the breakup of mint sets – often by non-numismatic heirs who don’t know common dimes from scarce dimes – means many of these pieces are now out and about in circulation. Only 1,457,000 were made, so if you happen to find a 1996-W Roosevelt dime in circulation it’s worth hanging on to. Even circulated specimens can bring $2 or $3. [Learn More about 1996-W Roosevelt Dimes]

While Roosevelt dimes aren’t the hottest collectible coins, this only means there are fewer people looking for the scarce dimes listed here in this blog post. All the more opportunity for you to cash in on some valuable dimes that you can pluck right from circulation. Good luck!

I have a worn 1965 dime that weighs 2.04 grams. I would think that the weight reduction is a bit high. I've weighed it multiple times, recallabrated it, and used a new scale. Anyone have a idea?

Excellent article. Thanks for the insight!

I did find my 1964 dime, no mint Mark. I always thought it WAS silver, Now I’m praying it’s not silver.

I always look at my change when I get it. I know I'm weird but being nearly 44 I keep anything before 1979 as well as those I know to watch for.. Only today dis I learn about th 1965 no ment mark dime. So I got to looking at my change in the side pouch of my wallet where I keep my old "save" coins for about a month at a time before I go through them all and separate them into thier proper spots and I found 2 1965 times no ment... 1 is definitely silver and the other is a clad... I cant believe it... Now my question is where can I go to get it graded without being ripped off by someone who would try and keep it them self because it looks in really good condition

I've got a '65 Roosevelt transitional. Weighs 2.27 so i don't know if silver or zinc BUT its pretty much missing the mint. You can't see with naked eye, only under magnify and at certain angles in the light. And its a P when you can see it. Almost like the die for the mint mark was filled with ink. Can anyone point me in the right direction? Oh, and 3 1982 transitional Lincoln memorials. 1 zinc small date s ddo, 1 copper D small date ddo and 1 copper large date, ddor, hair error, clash line through date - reverse top right corner of memorial has further protruding corner. Bottom left of memorial has a "blotchy" (i forget the proper terminology) mark. AND the craziest part is it has slight, but visible to naked eye, ridges like a dime. AAAND on the ridge under magnify, there's a "B" in one spot and what looks to be an "N" info anothet spot. Can anyone help me or point me in the right direction with these?

The circulated 1996-W dime looks to be selling for more than $2-$3, at least on ebay. Prices range from $20s and $30s for certified examples in the MS66-67 range, to $8-$12 for moderately to mildly circulated specimens (VF-AU.) I suppose the low VFs and certainly the Fines and Goods will command less -- $4-$6 -- and maybe that was what the writer was referring to. In any case, no one is going to get rich off these dimes, but it would be fun to find one in pocket change.

I would add two more Roosevelts to this list. Look for 1982 and 1983 uncirculated cdimes since no Mint Sets were made for those two years