A Pricing Analysis of the Sesqui $2.50 Gold Commem in MS66 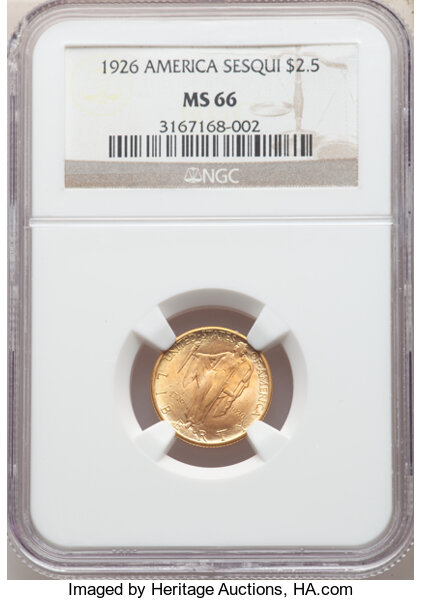 This issue’s “Featured Coin” gave us fits because the Sesqui $2.50 in MS66 has sold for a dizzying array of prices in the past years, ranging from $3,300 to $9,300. Auction results in MS66 have been all over the place, so we spent some time puzzling over how to best determine “Bids” by studying auction records, observing exchange bids*, and soliciting feedback from known traders in this issue.

At the moment, the sight seen “Bid” for this coin on CDN Exchange is $7,500. However, the last five auction results in 2015 tell a different story:

Given that the Bluesheet is a “sight unseen” publication, the question was where to set the price given these varying prices realized. The Sesqui in MS66 is not exactly common either — there are 273 total examples graded at the two major grading services. Additionally, none of the sales above were for coins with a CAC sticker, which would warrant a value of $7,500, or more.

In the end, some subjective decisions were required to arrive at an accurate price. We determined a baseline Bluesheet value of $3,800 for both PCGS and NGC certified coins. The lowest price of $3,290 appears to be as an anomaly as this price represents what we feel an average-for-the-grade coin is apt to trade at.

*Note: At their request CDN is no longer monitoring CCE for market prices.