A "Stellar" Coin For the Pattern Collector

Struck only for two years but with two different designs, in 1879 and 1880, the Stella is instantly recognizable to collectors today and would be a wonderful piece to own and enjoy in the years to come.

A "Stellar" Coin For the Pattern Collector 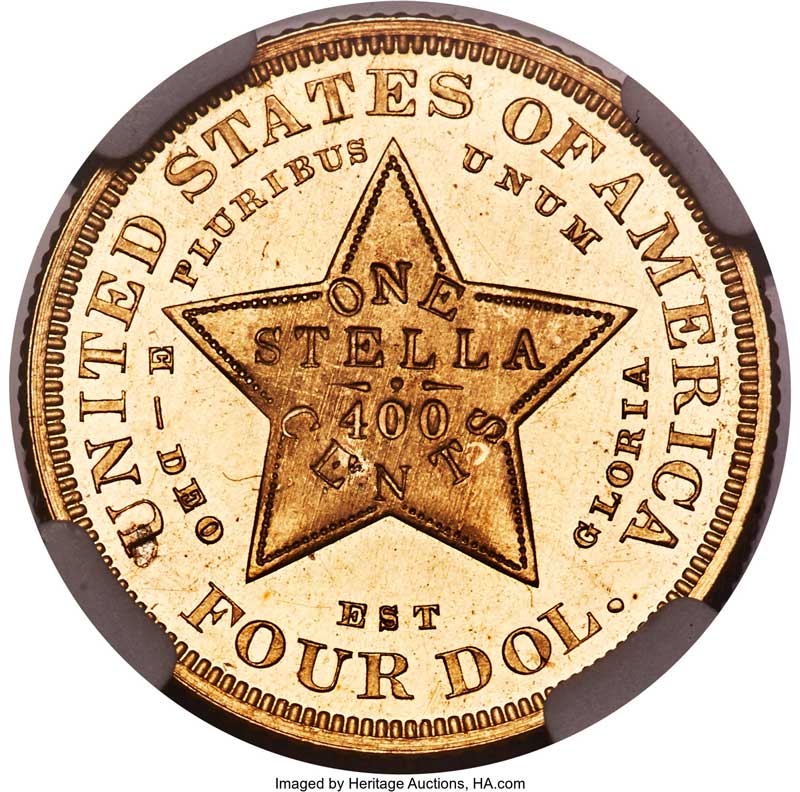 The reverse side of the 1879 $4 Stella pattern which will be sold in conjunction with Heritage's June 2020 Long Beach Auction.

Did you know that the United States Mint made $4 gold coins for a brief period in time? Yes, I did say $4. A “Stella,” or $4 Gold Piece, was minted for just two short years in 1879 and 1880. These coins, considered pattern pieces, were produced as part of a fascinating, short-lived experiment to try out a new denomination aimed at trade.

Struck only for two years but with two different designs, in 1879 and 1880, the Stella is instantly recognizable to collectors today and would be a wonderful piece to own and enjoy in the years to come. Their odd $4 denomination is a quirk that is nearly as popular with numismatists as the lovely design of the Flowing Hair pieces or the true scarcity of the Coiled Hair pieces.

As our catalogers explain, "The United States Mint has put out a number of strange, seemingly needless coinage denominations over its 228 year history, including the two and three cent coins, a short-lived twenty cent piece, and the three dollar gold piece, but none of them stand out quite like these four dollar coins."

Depending on the specifics and the coins' condition, these pieces can often exceed the $250,000 price range! Heritage Auctions will be offering a Flowing Hair example that can be purchased more affordably (in relative terms) and would be a wonderful addition to a type set, pattern collection, or cabinet of high-quality gold coins. Graded Proof 63 Cameo by NGC, this is your chance to own such an iconic coin while staying under the $200,000 mark.

Roughly 400 pieces were believed to have been struck, making any Stella a true prize for the advanced collector. Expect spirited bidding when this coin crosses the auction block: [link to auction lot].