Activity across the market (January 2020 Greysheet) 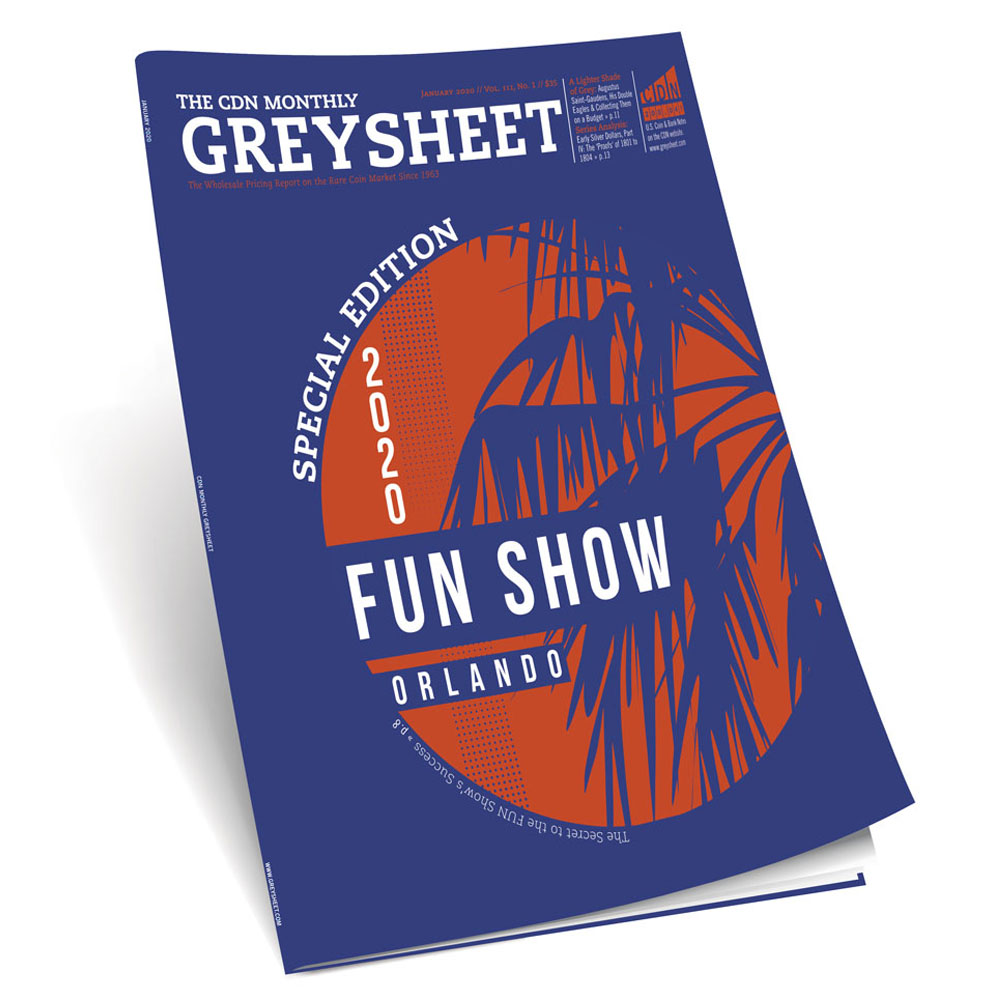 Activity across the market (January 2020 Greysheet)

ELECTION YEAR ENTROPY
At the beginning of every new year the thoughts of many turn to what the prospects are for the market. Will the market go up? Is the market hot? These and many other questions come to the forefront for dealers and collectors.
One of the most important factors for the market in 2020 is that it is an election year. The traditional thought is that the equity markets perform well in an election year, particularly when an incumbent is seeking re-election. Going back to 1928, only four of the 23 election years since that time have had a negative annual stock market return: 1932, 1940, 2000, and 2008. Interestingly, the year with the biggest annual loss was 2008, when the S&P 500 index lost 37%, although that was in conjunction with the major financial crisis. In the most recent election year, 2016, the market posted a 12% gain. While the stock market and the rare coin market operate independently of each other, when the equity markets are performing well those who hold such assets are more willing to spend disposable income on luxury items, which rare coins fall under. What almost everyone agrees on is that election years bring uncertainty, which generally means a flight to so-called safe haven assets, thereby reducing risk. One of these safe havens is precious metals, which have cooled off the past month after providing momentum to the coin market for much of the year. As always the FUN show will set the tone, but 2020 is a year that can go in a variety of directions.

A quick note about the Stack’s Bowers Baltimore auctions that took place in November which realized a total of more than $19 million across all categories. Although the news has been widely circulated, it bears repeating that the John W. Adams Collection of Comita Americana medals realized $1.7 million and the Washingtoniana collection of the Pennsylvania Historical Society realized more than $2.4 million. I point these results out because the demand for special and rare items is still robust. Collections such as these, which are often assembled as a labor of love to meet a historical, scholarly, or cultural end many times have the fortunate by-product of doing well financially for their owners. This can be applied to coins, whether U.S. or world. Collections built patiently over time with high overall quality will perform well when it comes time to return the coins to market.

Early Type: There are few adjustments in the low to mid circulated grades for some early Bust denominations. This material, while consistently in demand, suffers from inconsistent grading. A look at prices realized for coins in the fine, very fine, and extra fine grades will yield results that are widely disparate in the same grade. While it can be argued that this has always been the case, it is exacerbated in today’s market. Bust dimes and quarters are particularly tricky. A minority of these coins in existence are truly original and the competition is fierce for such examples, but other wane. The long term solution for this problem is to downgrade these coins into their proper holders and allow them to settle at the proper corresponding price level.

Half Dollars: Both Barber and Walking Liberty halves in high grade have not performed great recently. There are fewer buyers—at the moment—for some coins in the MS64 to MS66 grade range. In Barber halves, the softest area have been common dates in high grade that are blast white, which is contrary to some other silver coin series, where buyers shy away from any type of toning. In this case, there are presently too many blast white high grade Barber halves appearing on the market, generating concerns about originality and coins that have been upgraded by crack out dealers. Meanwhile, Barber halves with original toning and a CAC sticker sell well. Walking Liberty halves have enjoyed a strong run going back to 2016, so a slight market correction is not surprising. If there was a hot spot in the series, it is late dates in very high grade—MS66 and higher—with colorful toning. Some MS68 examples have come to market over the past year and those which have had very original surfaces have achieved very strong prices.