Amazing Half Dime From the Fledgling US Mint

The US Mint was brand-new to making coins in the 1790s and was only starting to get up to speed by 1794. 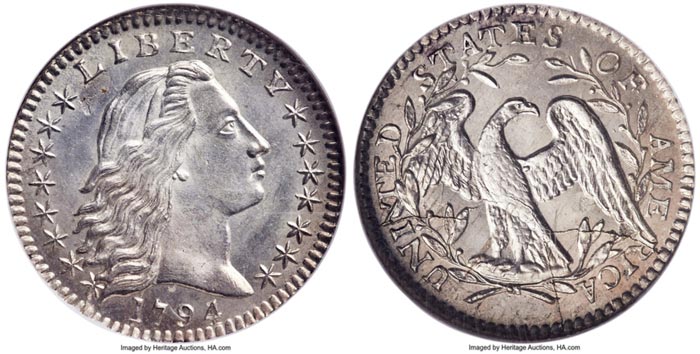 A Fantastic 1794 Half Dime in Heritage's September Sale

A Fantastic 1794 Half Dime in Heritage's September Sale

The US Mint was brand-new to making coins in the 1790s and was only starting to get up to speed by 1794. Things were still so preliminary that only a few denominations were struck in 1794: just the Half Dollar, Dollar, Cent, Half Cent, and Half Dime were minted that year. It would not be until 1796 when denominations such as the Quarter and Dime were added to the rotation. This was also the time period when the new United States had to rely on a ragtag mix of coins from other countries in circulation because there were not yet enough US-minted coins going around to fill the needs of commerce, making the first attempts at an American coinage hugely important and widely used.

Heritage will be offering a fantastic 1794 Half Dime in Sale 1334 in September. The US Mint was still quite new when this amazing 1794 Half Dime was struck, and yet the coin managed to survive in amazing condition, graded MS66 by NGC. This nearly "top pop" example is tied for second finest certified. The exceptionally high grade of this coin suggests that it was either set aside at the time of issue as the first of the design type, or it may have been one of the 15 or so pristine 1794s that were part of the Wadsworth-Rea hoard discovered around 1880.

When you consider how expensive other 1794 coins can be--we have a 1794 Dollar that is currently up for bid with a pre-bid of $3,000,000 at the time of this writing--a 1794 Half Dime in amazing condition is a wonderful example of early American minting history that comes with a more moderate price tag. While this coin is expected to turn heads and sell for more than $50,000, it is still "ownable" for many more people than a comparably-graded 1794 Dollar, which is impossibly expensive for most collectors!