Barbara J. Gregory, the former Editor of The Numismatist, the monthly magazine of the American Numismatic Association ( www.money.org ), has been named Editor of The Centinel, the quarterly journal of the Central States Numismatic Society ( www.CentralStatesNumismaticSociety.org ). She will succeed Gerald Tebben who is retiring this coming summer after 12 years as Editor of the award-winning CSNS publication. 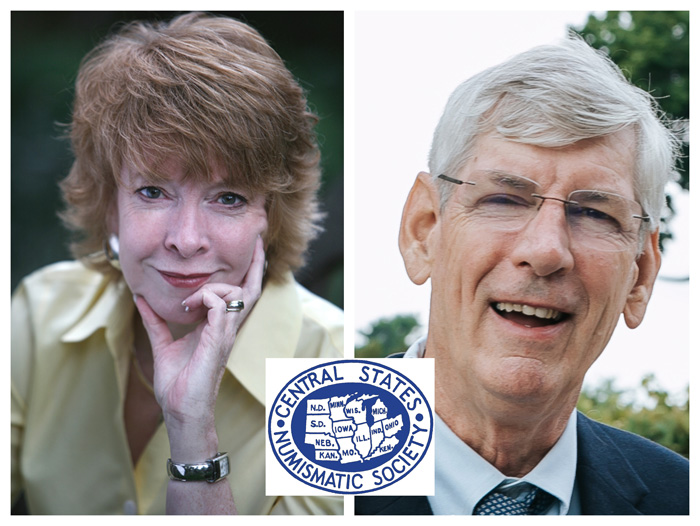 December 9, 2021 -- Barbara J. Gregory, the former Editor of The Numismatist, the monthly magazine of the American Numismatic Association ( www.money.org ), has been named Editor of The Centinel, the quarterly journal of the Central States Numismatic Society ( www.CentralStatesNumismaticSociety.org ). She will succeed Gerald Tebben who is retiring this coming summer after 12 years as Editor of the award-winning CSNS publication.

"When Gerry informed me of his desire to retire, the first name that came to my mind was that of Barbara Gregory. I was so pleased when I contacted her and she said she was interested in the position with CSNS,” recalled CSNS President Mitch Ernst.

“Gerry has become a dear friend during my tenure as President, and I have appreciated his opinions and perspectives. He will be missed, but we also are excited to see what Barbara will bring to our organization and our membership through the pages of The Centinel," said Ernst.

Gregory retired in April 2019 as Editor-in-Chief of The Numismatist after 38 years with the ANA. She was the first female editor of the publication and served as its editor-in-chief for 32 years starting in 1988. During her tenure at the ANA, The Numismatist became the first major hobby periodical to switch to desktop publishing and printing every edition in full color. She also worked to provide online access of the magazine to ANA.

Under her skillful leadership, the publication has won dozens of awards from the Numismatic Literary Guild and received accolades from the collector community.

“ I look forward to working with the Central States Numismatic Society and carrying on the tradition of excellence established by its members, patrons, and officers, most notably Centinel Editor Gerald Tebben. Thanks to Gerry’s vision and guidance, the CSNS quarterly journal has become a highly regarded, award-winning publication,” said Gregory.

She added: “I see The Centinel as the heart of this grassroots collector community. It highlights the interests, challenges. and strengths of its members, and supports the needs of this vibrant numismatic region. In the months to come, The Centinel will be reimagined and rejuvenated, with a lively new format and the informative news and articles members have come to expect. This transformation is an evolutionary process. As such, I appreciate readers’ patience, as well as their comments and suggestions.”

Tebben served as a reporter, coin columnist, Business Editor and Metro Editor during a 40-year career at The Columbus Dispatch newspaper in Ohio.

“I became Editor of The Centinel in late 2009 on the death of Rollie Finner. I was blessed with editorial contributions from established writers such as R.W. Julian, Steve Roach, and David Vagi, and engaged new authors. I also strived for content about the Central States region, increasingly picking up articles from Central States member club newsletters and providing a wider audience to local writers such as Milwaukee's Tom Casper and Elgin's Jim Davis,” said Tebben.

“While I am cutting back, I plan to continue as a columnist and values analyst for Coin World and as a member of the Ohio state management team for AARP Foundation's all-volunteer Tax-Aide program, which provides free tax preparation for senior citizens across the country,” he added.

Founded in 1939, the Central States Numismatic Society is one of the largest numismatic organizations in the United States. The society operates in 13 states, but membership is open to residents of all states and foreign countries. States in the CSNS region are Illinois, Indiana, Iowa, Kansas, Kentucky, Michigan, Minnesota, Missouri, Nebraska, North Dakota, Ohio, South Dakota, and Wisconsin.

For additional information about the Central States Numismatic Society and its annual convention conducted in the Chicago suburb of Schaumburg, Illinois each April, visit www.CentralStatesNumismaticSociety.org .