Blanchard and Company, the nation’s leading tangible asset firm, today affirms numismatic history was made with this week’s public auction of the Joan Zieg Steinbrenner coin set, which includes some of the finest gold type coins ever assembled. 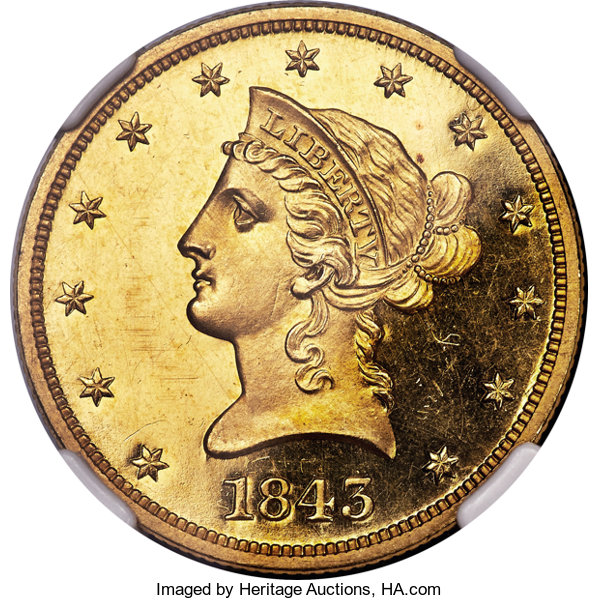 NEW ORLEANS, LA, August 15, 2019 – – Blanchard and Company, the nation’s leading tangible asset firm, today affirms numismatic history was made with this week’s public auction of the Joan Zieg Steinbrenner coin set, which includes some of the finest gold type coins ever assembled.

Over a 25-year period, Blanchard advised Mrs. Steinbrenner and through its deep numismatic connections sourced for her a historic collection of U.S. gold coins.

Mrs. Steinbrenner is remembered for her active philanthropic contributions until her passing in December 2018. Her husband George purchased the New York Yankees in 1973.

This week, 44 lots from her collection were presented at public auction, all coins Blanchard placed with Mrs. Steinbrenner, which sold for a collective $6.1 million. 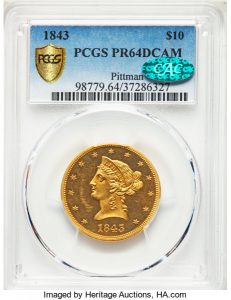 Blanchard originally placed in 2009 an 1843 $2.50, $5 and $10 three-coin gold proof set with Mrs. Steinbrenner that was pedigreed to legendary coin collector John Jay Pittman. This week’s auction broke up the set and the three coins sold for a cumulative total of $1,032,000.

Commenting on the sale results, “It represents her belief that when you acquire the highest quality that fits within your budget, you can’t go wrong. That’s what paid off for her. It was a legacy she built for her family and they were able to do with it as they pleased,” David Zanca, senior portfolio manager at Blanchard.

Mrs. Steinbrenner originally consulted with Blanchard with a goal of diversifying in tangible assets. “She had no knowledge of numismatics. Over a 25-year period, through the relationship we built, my expertise and Blanchard’s deep connections in the numismatic community, she was able to build one of the finest collections ever created as a legacy for her family,” Zanca said.

“Some of these coins are once in a lifetime coins that we may never see hit the market again,” Zanca said.

The long-term relationship between Blanchard and her family spans over 40 years.  Mrs. Steinbrenner’s father recommended his daughter work with Blanchard and she consulted exclusively with Mr. Zanca for 25 years.

Mrs. Steinbrenner began with a goal to diversify a portion of her portfolio in tangible assets due to concerns over world-wide debt and currency problems. “She wanted a portion of her investments in real and tangible, something she could see, touch and hold. Her father was a hard money guy. He had lived through the Depression and believed in real tangible assets,” Zanca said.

Through a trusted, personal relationship built over 25 years, Zanca listened, learned her individual goals and created numismatic recommendations based on exactly what she wanted to accomplishment.

The one rule of thumb Mrs. Steinbrenner lived by was to always acquire the highest quality that fits in your budget and you will never be disappointed.

“She always wanted the finest available,” Zanca said. “She never second guessed anything because she knew she was acquiring the best.”

In addition to the diversification and legacy she built for her family, Mrs. Steinbrenner developed a true love for the beauty and wonder of numismatics. Her favorite coin was the 1907 $20 Saint Gaudens High Relief.

“It was absolutely her favorite coin. She owned multiples in varying grades. She had one made into a necklace because she loved it so much. She loved the beauty of these coins so much,” Zanca said.

About Blanchard and Company

Founded in 1975, Blanchard and Company is the largest and most respected investment firm in the U.S. that specializes in precious metals and rare coins. Headquartered in New Orleans, Blanchard has owned and sold more than half of the published 100 Greatest U.S. Coins with over $1 billion in sales in the last three years alone. With over 450,000 customers to date, Blanchard has provided investors and collectors with the expert consultation they need to strategically acquire American numismatic rarities and gold, silver, platinum and palladium bullion.

David Zanca, with Blanchard since 1993, has handled some of the finest rarities in the world and works with any size collector and investor. Mr. Zanca is available at 1-800-880-4653 or via email at dczanca@blanchardgold.com.