Gold rallied nicely in the final days of July, getting to the $1,260 mark and giving common date gold coins a positive bump. Multiple market prognosticators are predic 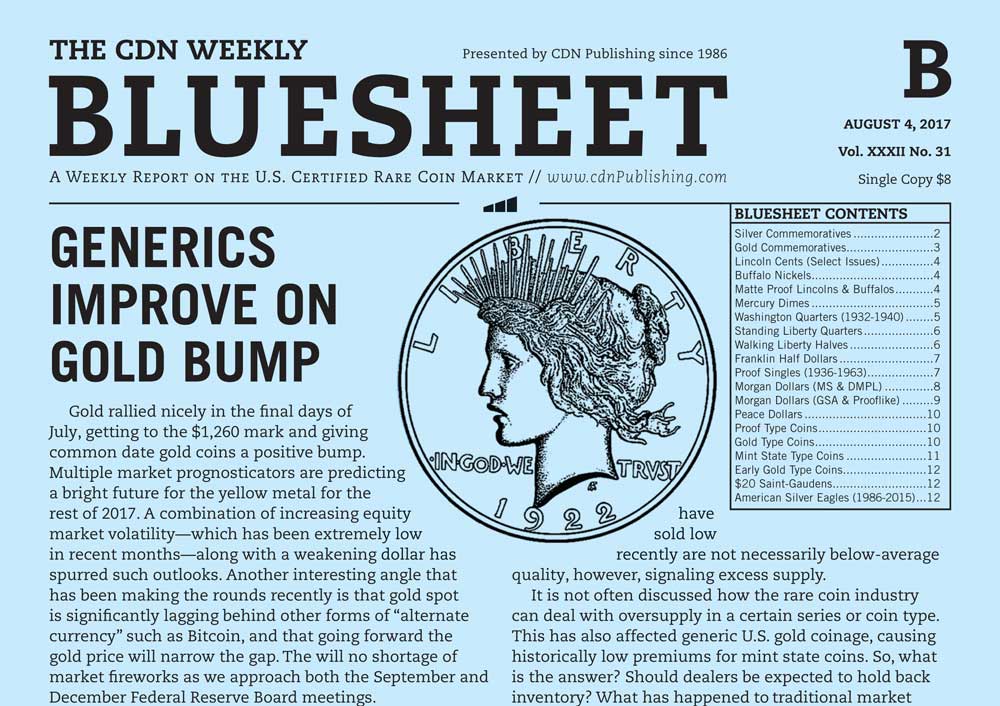 Gold rallied nicely in the final days of July, getting to the $1,260 mark and giving common date gold coins a positive bump. Multiple market prognosticators are predicting a bright future for the yellow metal for the rest of 2017. A combination of increasing equity market volatility—which has been extremely low in recent months—along with a weakening dollar has spurred such outlooks. Another interesting angle that has been making the rounds recently is that gold spot is significantly lagging behind other forms of “alternate currency” such as Bitcoin, and that going forward the gold price will narrow the gap. The will no shortage of market fireworks as we approach both the September and December Federal Reserve Board meetings.

In pricing updates, we have reviewed both Morgan and Peace dollars, and the results in these series recently have not been great. Whether this is from a lack of buyers leading up to the World’s Fair of Money, oversupply, or just a general malaise due to the summer, multiple dates in both series have sold cheap in July. This is somewhat surprising, because earlier in the year Peace dollars had shown some positive consistency in prices realized. This has always been a series with large spreads due to the challenge of grading and the overall lack of eye appeal and strike that can plague many coins. The coins that have sold low recently are not necessarily below-average quality, however, signaling excess supply.

It is not often discussed how the rare coin industry can deal with oversupply in a certain series or coin type. This has also affected generic U.S. gold coinage, causing historically low premiums for mint state coins. So, what is the answer? Should dealers be expected to hold back inventory? What has happened to traditional market makers with deep pockets who can hold the inventory? What about auction firms, especially ones that have weekly or monthly online auctions? Should they be conscious of selling a disproportionate amount of one type of coin or date in a short space of time? These are questions we will address in future articles. From a dealer perspective, it is a difficult balance to manage inventory while also keeping cash flow in a good position. The need to sell and move inventory is a legitimate concern. From an auction house perspective, the wishes of the consignor and the need to fill out a sale are important considerations.