Now that a few weeks have passed and we have had the opportunity to fully digest the immense amount of auction results from the FUN show, we find ourselves with a numbe 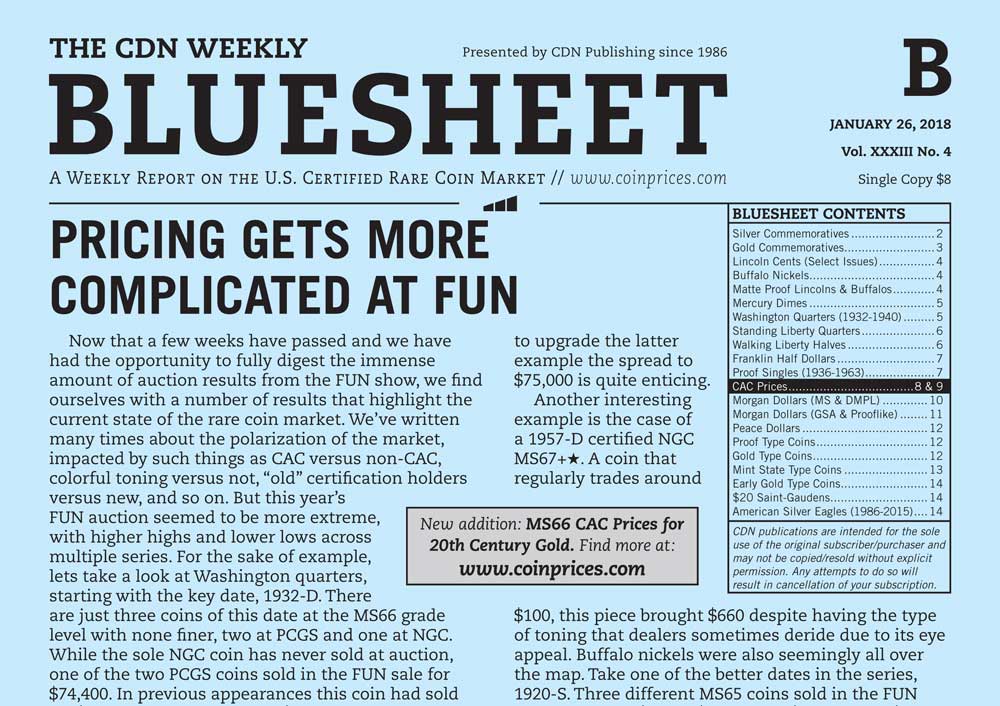 Now that a few weeks have passed and we have had the opportunity to fully digest the immense amount of auction results from the FUN show, we find ourselves with a number of results that highlight the current state of the rare coin market. We’ve written many times about the polarization of the market, impacted by such things as CAC versus non-CAC, colorful toning versus not, “old” certification holders versus new, and so on. But this year’s FUN auction seemed to be more extreme, with higher highs and lower lows across multiple series. For the sake of example, lets take a look at Washington quarters, starting with the key date, 1932-D. There are just three coins of this date at the MS66 grade level with none finer, two at PCGS and one at NGC. While the sole NGC coin has never sold at auction, one of the two PCGS coins sold in the FUN sale for $74,400. In previous appearances this coin had sold for $89,125 in 2001, and then $143,750 in 2008. The other PCGS example sold in 2015 for $82,250. There were two examples of this same issue in PCGS/CAC MS65 in the sale: one sold for $7,800 and the other for $18,000. Looking back at the price history of the MS65 1932-D’s, coins have traded regularly in the high-teens and low-twenty thousands at the beginning of this century, and trended lower since. While the 40% increase in the PCGS MS65 population explains some of this, how is one to interpret the two realizations in the FUN sale? It is not a case where one coin is dark and the other is blast white, as both coins have toning with the higher priced piece showing darker toning. Most likely two upgraders perceive some opportunity to upgrade the latter example the spread to $75,000 is quite enticing.

Another interesting example is the case of a 1957-D certified NGC MS67+H. A coin that regularly trades around $100, this piece brought $660 despite having the type of toning that dealers sometimes deride due to its eye appeal. Buffalo nickels were also seemingly all over the map. Take one of the better dates in the series, 1920-S. Three different MS65 coins sold in the FUN sale, selling for $8,100, $9,000, and $13,200. The $13,200 result is in line with the current Greysheet bid, but the other two coins were not unattractive, and indeed the least expensive coin shows nice iridescent peripheral toning.

We point out results such as these to try and help dealers and collectors understand the effort that should be taken when evaluating coins to both purchase and to sell. While our utmost priority is accurate pricing, there is no way to convey that two coins in the exact same grade can trade for $7,800 and $18,000 in the same venue. For collectors, this highlights the need for a trusted dealer advisor who keeps abreast of the current trends in the market.