We have just concluded the second quarter of 2017, and the middle tier of the certified coin market has remained surprisingly firm through the first half of the year. O 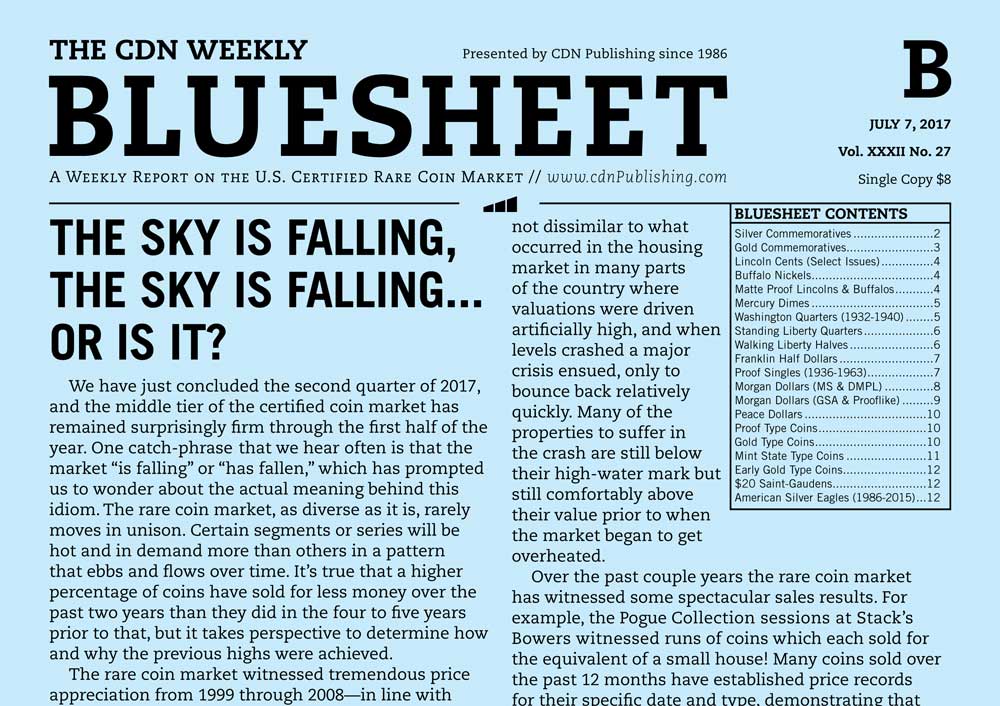 We have just concluded the second quarter of 2017, and the middle tier of the certified coin market has remained surprisingly firm through the first half of the year. One catch-phrase that we hear often is that the market “is falling” or “has fallen,” which has prompted us to wonder about the actual meaning behind this idiom. The rare coin market, as diverse as it is, rarely moves in unison. Certain segments or series will be hot and in demand more than others in a pattern that ebbs and flows over time. It’s true that a higher percentage of coins have sold for less money over the past two years than they did in the four to five years prior to that, but it takes perspective to determine how and why the previous highs were achieved.

The rare coin market witnessed tremendous price appreciation from 1999 through 2008—in line with most other asset classes outside of the world of collectibles. When the financial crisis of October 2008 occurred, it was easy to proclaim that the market was declining because, from a traditional stock market view, it truly was falling, with every index and individual share price going down in unison. This effect was somewhat delayed in the coin market, which did not begin to drop noticeably until 2012-2013 when the precious metals prices endured their steep decline.

Despite this delay, and the compounding effect of negative metals, the majority of rare coins did not fall back below their pre-2000 levels. Our market is not dissimilar to what occurred in the housing market in many parts of the country where valuations were driven artificially high, and when levels crashed a major crisis ensued, only to bounce back relatively quickly. Many of the properties to suffer in the crash are still below their high-water mark but still comfortably above their value prior to when the market began to get overheated.

Over the past couple years the rare coin market has witnessed some spectacular sales results. For example, the Pogue Collection sessions at Stack’s Bowers witnessed runs of coins which each sold for the equivalent of a small house! Many coins sold over the past 12 months have established price records for their specific date and type, demonstrating that patterns of popularity shift but don’t disappear. Early gold coins (1795-1838) are hot right now, while classic gold commems are cold.

Time and again we’ve seen these winds of change shift completely, often without warning. The sky is NOT falling in the rare coin market. It’s a little cloudy along the horizon, but the sun is peeking through as well. The savvy buyer has many opportunities today.

Professional numismatists can be a stubborn bunch sticking to old habits and buying patterns. If you find your business suffering, perhaps it’s time to consider taking a different approach to your business model, or a different series to specialize in.