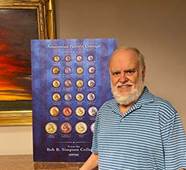 DALLAS, Texas (July 30, 2020) – Bob Simpson, the Texas energy executive and philanthropist, is as legendary in numismatic circles as the momentous United States coins he collects. And in coming months, Dallas-based Heritage Auctions will offer some of the greatest rarities found in Simpson’s historic assemblage — or anywhere else in the world.

Simpson, whose collection is ranked by Professional Coin Grading Service as one of the best ever amassed, is deaccessioning selections from that collection beginning September. 17, 2020, and continuing into 2021.

“Important Selections from The Bob R. Simpson Collection, Part I” will include some of the most significant U.S. coins spanning the 18th century to the 20th century. The first sale, and those to follow, will take place exclusively through Heritage Auctions, the world's leading numismatic dealer and auctioneer.

“Like all collectors, I’ve put together sets and collections and sold coins along the way to refocus my collecting efforts,” said Simpson. “And that is what I am doing here.”

“Bob isn’t just a collector, but also a brilliant businessman, and we are so pleased Heritage was his auction house of choice,” said Heritage Auctions President Greg Rohan. “It’s especially an honor when the collector is also extremely savvy, and I would like to thank Bob for his confidence and trust as we begin this series of sales.”

In the first event, which begins at 6:00 p.m. CT on September 17, 2020, Simpson is offering one of the most celebrated, and coveted, rarities of all time: the 1894-S Barber Dime, of which there are but a handful of known examples. Simpson, of course, has one of the finest – it's graded PR66. There is none higher.

The 1894-S Barber Dime has an enormously important tale to tell — one that is often shrouded in myth and mystery.

Jeff Garrett and Ron Guth, authors of 100 Greatest U.S. Coins, consider the 1894-S dime one “in a triumvirate of America’s most desirable coins,” alongside the 1913 Liberty nickel and the 1804 silver dollar. Only nine specimens are known to survive of the 24 dimes minted; in March 1900, The Numismatist proclaimed that “in the last decade the San Francisco Mint has issued one of the very rarest United States coins.”

More than a century later, tales abound about what became of the lost dimes; one involves the coin being spent on ice cream during a summer’s day. To this day, historians have been unable to explain why the mintage was so small.

“Any time the 1894-S Barber dime has come to market,” said Heritage Auctions Executive Vice President Todd Imhof, “it has been a headline event.”

One of the most famous rarities in Simpson’s collection is a 1795 Flowing Hair Dollar — the finest ever certified with a silver plug and the second-finest in existence.

Making it even more notable, if such a thing were possible, is the fact it’s a Lord St. Oswald coin, among those originally acquired by Sir William Strickland during his visit to the United States in 1794 and 1795, when the future 6th Baronet of Boynton spent time in the company of George Washington, with whom he would become close, and Thomas Jefferson.

In fact, history now tells us this proof-like gem was very likely purchased by Strickland directly from the Philadelphia Mint in 1795. That lineage explains the quality of this coin, whose silver plug catalogers once mistook for damage when, in fact, it was a precious anomaly.

“We are all just temporary stewards of these beautiful pieces of history,” Simpson said. “I’ve enjoyed acquiring these coins, I’ve enjoyed owning these coins, and now it’s time for them to go into others’ collections in the hope it brings them as much pride of ownership as they have given me.”

One of the great prides in Simpson’s collection is his patterns. After all, in 2008 he reportedly spent $36 million acquiring the entirety of the Southern Collection, which became the cornerstone of his patterns assemblage. And some of that he's holding on to, including the Amazonian Gold Pattern Set he keeps close to his heart. But several coins from the Southern Collection will be part of the Sept. 17 sale and those to follow.

“The pattern coins have always fascinated me,” Simpson says of the pieces kept from the public’s hands. “I think the designs are even more beautiful than the regular-issue coins. And because the mintages are so miniscule, they are so much rarer — and far more undervalued — than regular-issue coins."

There are more than 300 important coins in the September 17 auction, with countless more highlights to come throughout the next several months. Also included in Part I of the Simpson event are:

“I’ve been a buyer and seller all along,” Simpson said of his decision to part with so many sought-after numismatic rarities. “I am always fine-tuning the collection. I upgrade. I move in different directions.”

“Bob Simpson’s name has been synonymous with one of the great all-time collections for decades, and he is still very actively collecting,” Rohan said. “It’s just a huge thrill whenever we can work with one of the top collectors ever, and we are incredibly proud Bob selected Heritage Auctions for this series of significant auctions.”

I like what he said, “We are all just temporary stewards” of these things. True.