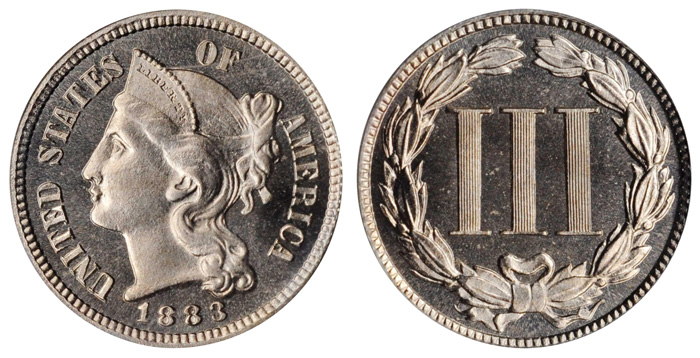 In a financial sense, Proof Three Cent Nickels have been asleep for decades. On March 28, 1980, Greysheet Bid was $2,150 for a Proof-65 Three Cent Nickel. If there was a CPG® retail price estimate then, it would probably have been around $2,550, a sizable multiple of the current value for one of the same coins, especially since grading standards loosened during the late 1979 to early 1980 coin market boom!

On Oct. 20, 2020, Heritage sold a CAC approved Proof-65 1887/6 for $552. PCGS distinguishes a “strong overdate” variety from the not so strong. If an 1887/6 is CAC approved, it is probably strong enough. The overdate, though, should be apparent without magnification. If a collector cannot see the overdate feature of a particular certified 1887/6 Three Cent Nickel, then he should not buy that individual coin and may wait for another 1887/6 to be offered. 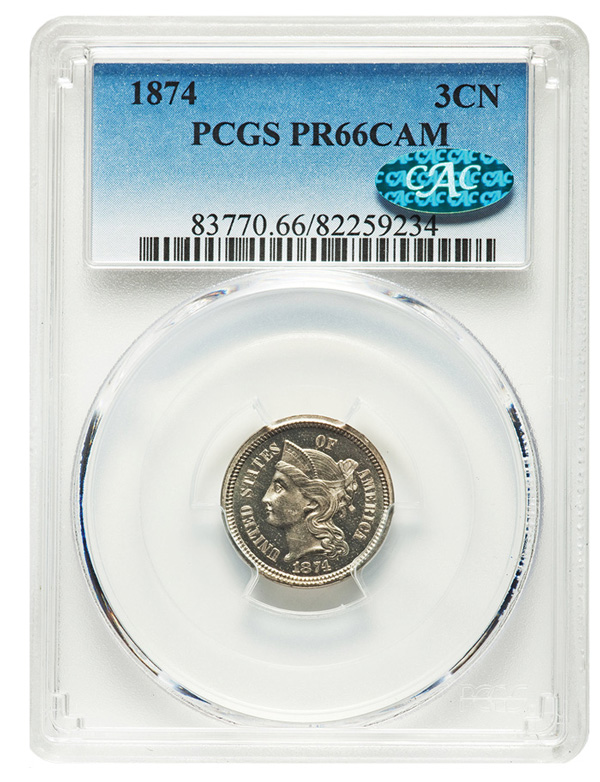 Many Proof coins developed a sharper Cameo contrast after having been dipped in an acidic solution. Personally, I usually prefer the appearance of such coins before they were dipped. Colorful natural toning and cool clouds are often destroyed by dipping.

A certified Proof without a Cameo designation that received a green sticker from CAC will not necessarily receive a sticker again if it is later designated as Cameo by PCGS or NGC, though some will be stickered a second time. There are wholesalers who kept the PCGS and NGC printed labels that were inside the holders that they cracked open. Invariably, there are some individual coins, especially Cameo designated Proof coins that have been stickered more than once at CAC and are listed more than once in CAC population data. An immediate point is that PCGS, NGC and CAC population data may overstate the number of Proof Three Cent Nickels that have been certified, especially since coins with Cameo or Deep Cameo designations may have previously been certified without such a designation.

In my opinion, it is not a good idea to pay a substantial premium solely because a coin has a Cameo designation. If a collector sees the respective coin and is spellbound by its Cameo contrast, then it may make sense for that particular collector to pay a large premium for that specific coin. In many cases, however, there are subtle differences between Proofs of the same type and date that have received Cameo designations and those that did not. A coin that did not receive a Cameo designation may later receive one from the same grading service. Collectors should focus on the characteristics of an individual coin and then reflect upon its certification, rather than buy the holder and just casually glance at the coin. 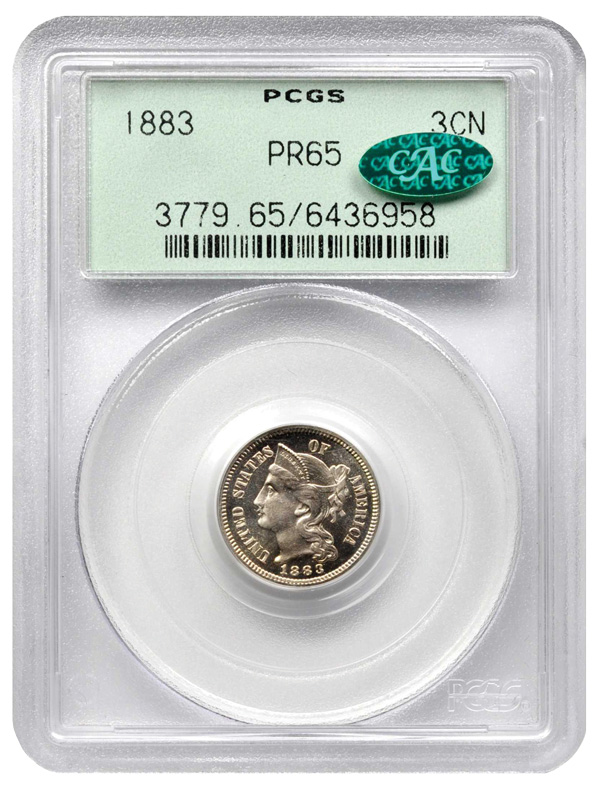 While the importance of a Cameo contrast is a matter of personal preference, it is sensible to think about the extent of the contrast in particular instances, about the visual appeal of Cameo contrasts, and about the logic of premiums for Cameo designations. A CAC approved Proof-66 1874 has a CPG®-CAC estimated retail value of $972, and the CPG ®-CAC retail estimate for a Proof-66 1874 with a Cameo designation is $1,050, just $78 more, about an 8% premium. This is a small premium; it certainly would not be alarming to pay an additional $78 for a CAC approved Proof-66 Cameo 1874 Three Cent Nickel, regardless of the extent or desirability of the respective Cameo contrast. 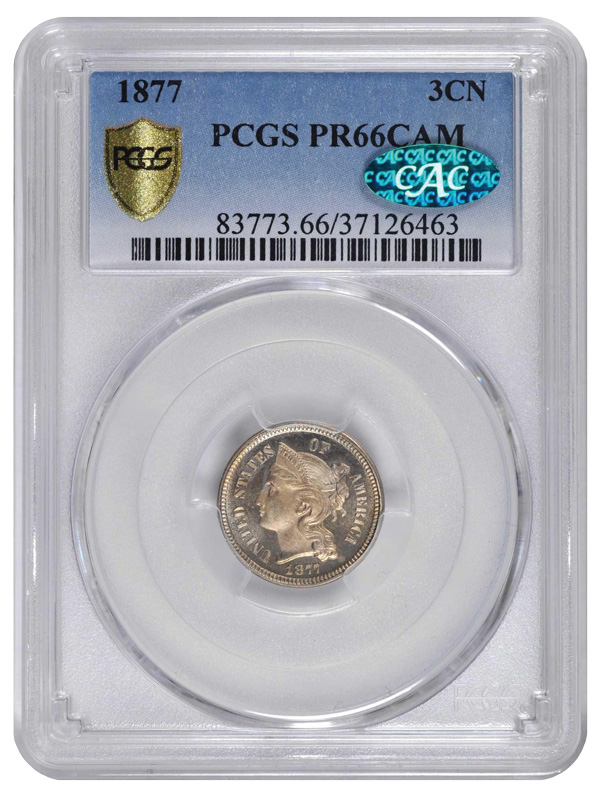 Many non-cameo, Proof Three Cent Nickels feature appealing blue and russet toning, sometimes with wonderful green tints. Moreover, some of the non-cameo Proofs with russet and gray tones over vibrant mirror surfaces are exceptional. In my opinion, very attractive natural toning, especially toning that is likely to have stemmed from original mint packaging, is more desirable than a Cameo contrast. 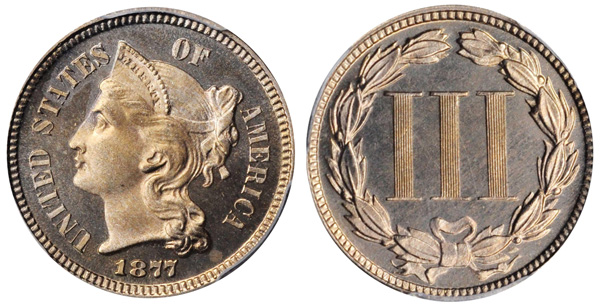 Although it may take time to find representatives of a few of the relatively scarce dates, a CAC-only set of Proof Three Cent Nickel is a very practical objective. Only a few dates are particularly expensive. Many can be purchased for prices in the range of $350 to $800 each. For a complete CAC-only set of Proofs of a whole 19th century denomination, the costs of Proof Three Cent Nickels are low in the grand scheme of classic U.S. coins.

Subscribe to November 2021 edition of CAC Magazine for the industry's most respected pricing and to read more articles just like this.