Building a CAC-Only Set of Charlotte Mint Half Eagles

A set of CAC approved Charlotte Mint, Liberty Head half eagles that is more than three-fourths complete would be a cool, satisfying and important achievement. 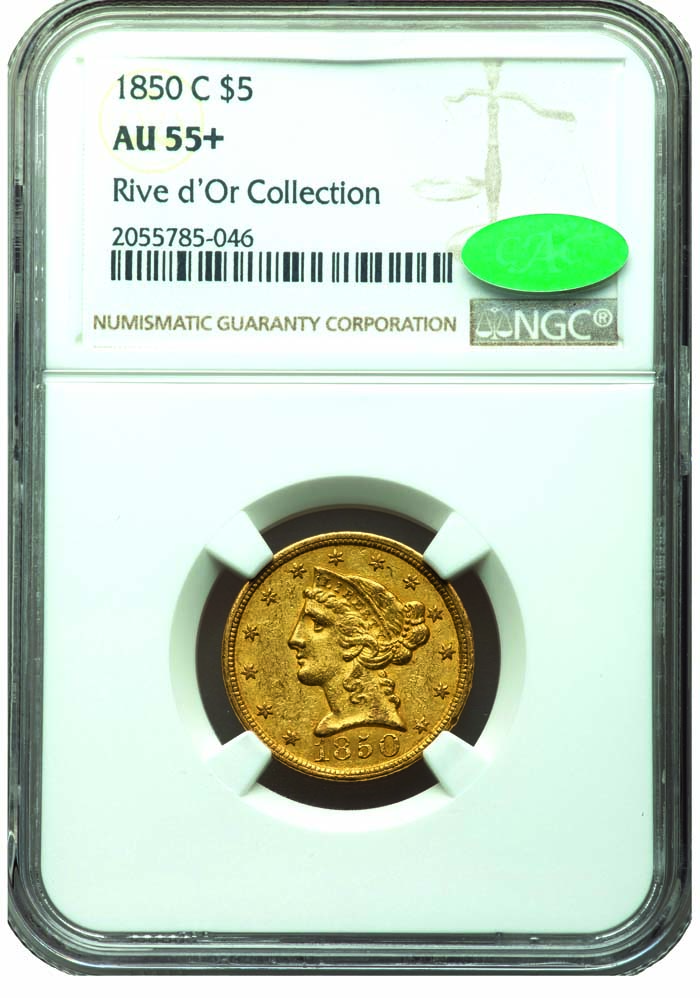 Building a CAC-Only Set of Charlotte Mint Half Eagles 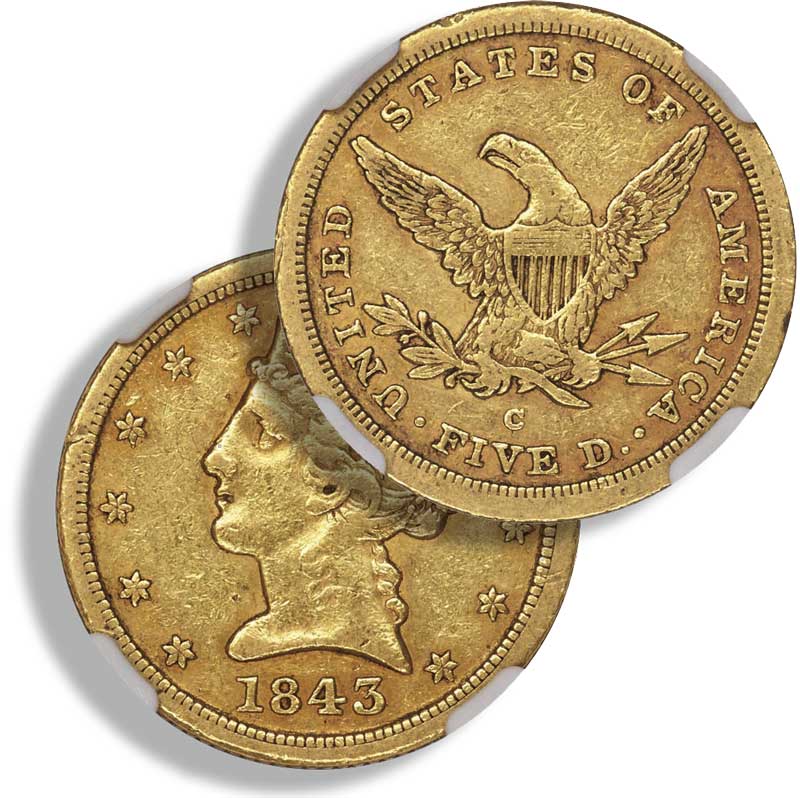 An example of an 1843-C half eagle minted in Charlotte, North Carolina

Recently, I have been analyzing CAC-only sets that are practical to build. It may be exciting, however, for a collector to attempt to build an impractical and difficult CAC-only set. A set of CAC approved Charlotte Mint, Liberty Head half eagles that is more than three-fourths complete would be a cool, satisfying and important achievement. Even a totally (100%) complete CAC-only set is not as difficult nor as as expensive a task as it may seem at the onset. Time and patience are required.

The Charlotte, Dahlonega and New Orleans Mints were established in 1838. From 1793 to 1837, all U.S. coins were minted in Philadelphia.

The building of a set of Charlotte Mint half eagles would certainly be a challenge, with or without CAC stickers. Furthermore, a collector who seeks only CAC approved Charlotte or Dahlonega Mint coins would not have to tolerate some of the very ‘washed’ appearing and chemically influenced pieces that failed to receive a CAC stickers, many of which bring tears to my eyes.

Gold coins from the Charlotte and Dahlonega Mints were not saved by many collectors in the middle of the 19th century. Survivors in the present tend to have problems.

People collecting coins during the 1840s and 1850s generally sought coins that were minted much earlier. Charlotte and Dahlonega coins were usually spent rather than collected especially in regions where there was a shortage of circulating coins. 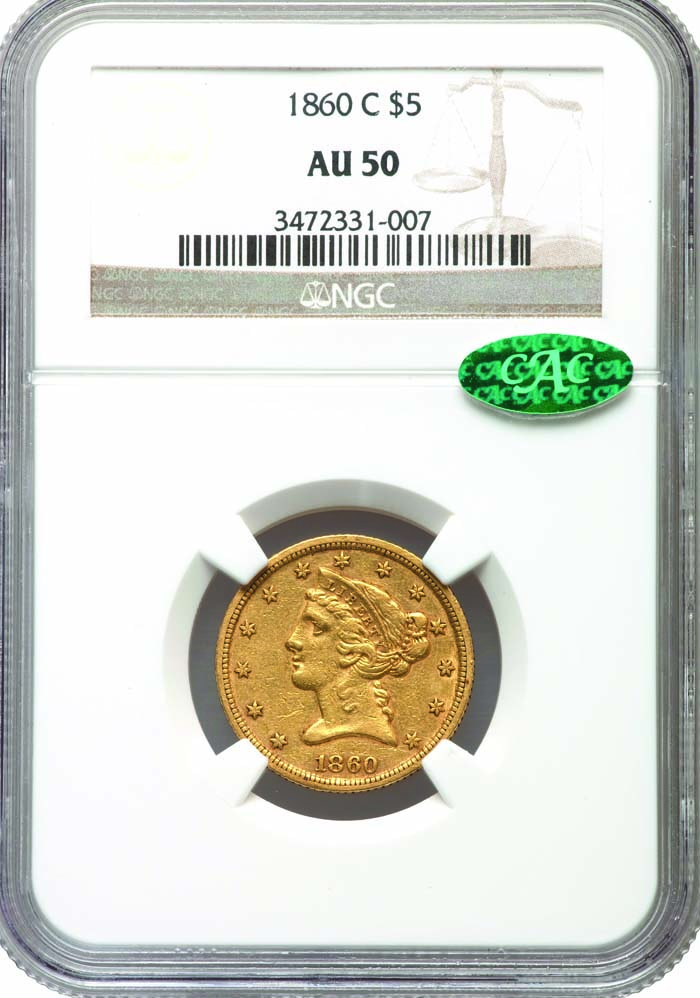 An example of an 1860-C half eagle graded NGC AU50 with CAC approval.

Before 1860, most of the people who did collect coins soon after they were minted would somehow or another obtain attractive representatives of the coins of the Philadelphia Mint. Mintmarked dates were not popular among coin collectors during the middle of the 19th century.

Southern gold coins were roughed up in commerce or accidentally mistreated by people who were not coin experts, and were never plentiful from the beginning. Few really appealing coins survive. More recently, many have been polished, cleaned and/or artificially brightened to be marketed to inexperienced collectors or to non-collectors as historical relics. Certainly, they are of historical importance as they relate to important events in the South.

These totals may include multiple counts of a few coins, especially of coins that received different PCGS or NGC serial numbers after wholesalers failed to upgrade them.

All have a ‘C’ mintmark on the reverse (back of the coin). For the 1850 and the 1854, a distinction is often made between a normal ‘C’ mintmark and a “Weak C,” which is faint. As decent Charlotte Mint coins are so rare anyway, this is not a leading issue. Surface quality is far more important, and interested collectors should be glad to find any 1850-C or 1854-C half eagle.

If the overall rarity and historical importance of Charlotte Mint half eagles are considered, market levels are reasonable from a logical perspective. There are many large cents, Mercury dimes, Walking Liberty half dollars, and Morgan dollars that cost far more. There are even generic gold coins, particularly CAC approved, PCGS or NGC graded MS67 coins that cost much more than most of the rare Charlotte Mint half eagles that are cited herein.

As each coin is different and a multitude of factors affect auction results, prices realized should not be interpreted as precise market values. Prices realized are cited to demonstrate that CAC approved, Charlotte Mint coins of almost all dates are available and are not extremely expensive. Before embarking upon a collecting quest, it is a good idea to have an idea of the costs involved and time required. It is also important to keep in mind that many coins are sold privately. Every year, some Charlotte Mint coins trade in a quiet manner.

The 1861-C and the 1842-C ‘Small Date’ are the key Charlotte Mint half eagles. The 1861-C is also demanded by collectors who focus on the period of the U.S. Civil War. With or without CAC stickers, 1861-C half eagles are very expensive. Although CAC approved 1861-C half eagles are rarely auctioned, they are around. They are on ‘want lists’ that collectors supply to dealers and consultants. It is best for a collector to seek expert advice before acquiring an 1861-C or an 1842-C ‘Small Date.’

Subscribe to August 2020 edition of CAC Magazine for the industry's most respected pricing and to read more articles just like this.

Interesting article. I hope to see more interest, demand and auction price increase in C-Mint coins as they so deserve - ParadimeCoins

This is a good read. Very informative as well as interesting. Well documented with interesting facts.