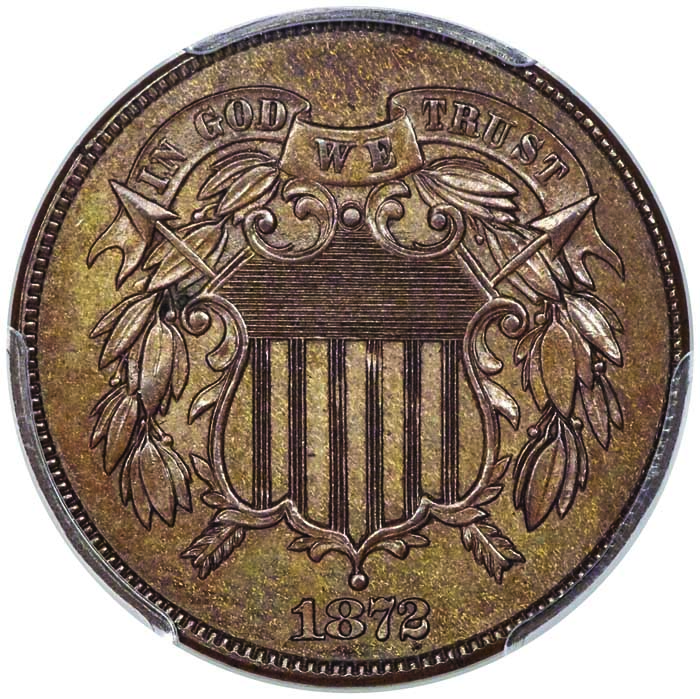 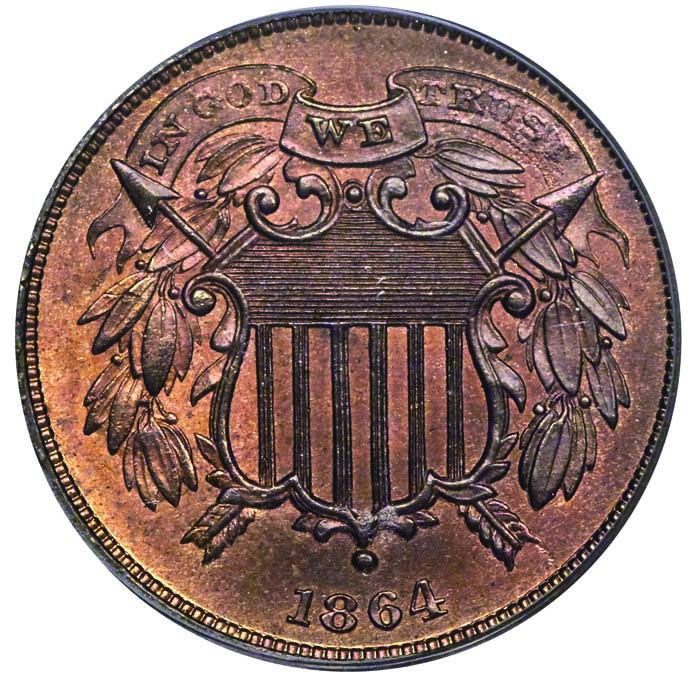 The 1864 Small Motto 2-cent piece is one of the key dates in the series.

In the minds of collectors now and of the general public in the 19th century, Two Cent Pieces were categorized along with Indian cents. Half cents and large cents are thought of as being in a separate category, ‘early coppers.’

Surprisingly, the popularity among collectors of Two Cent Pieces has waned over time. Most collectors of Indian cents ignore them. In my opinion, they are fascinating and are wonderful topics for conversations. If more collectors showed Two Cent Pieces and Three Cent Nickels to friends and houseguests, more people would become interested in collecting classic U.S. coins.

Indeed, most U.S. citizens in the present are unaware that Two Cent Pieces ever existed. Many experienced collectors do not consciously realize that it is easy and inexpensive to build a set.

The 1864 Small Motto and the 1872 are the keys. While they cost much more than the others, they are not expensive in the context of 19th century U.S. coins. 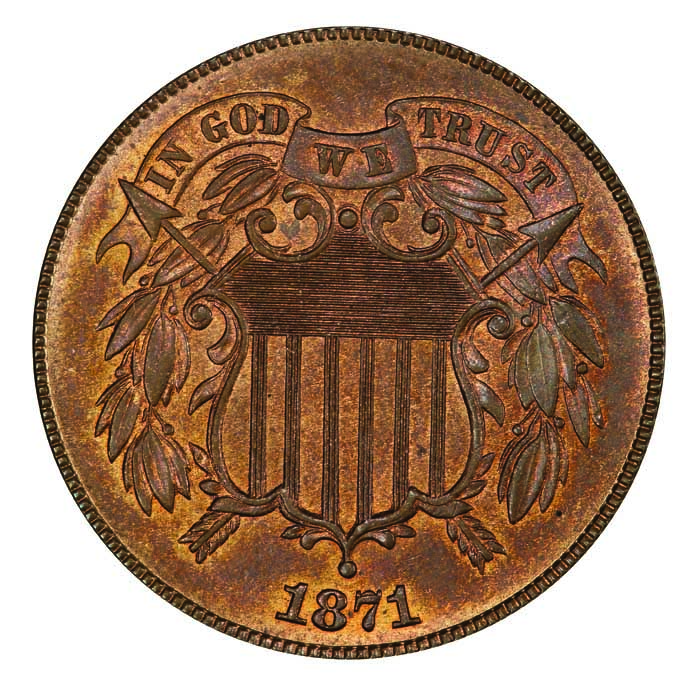 A mint state example of the 1871 2-cent piece with red-brown surfaces.

For Two Cent Pieces that cost more than $250 each, it is usually a good idea to seek coins that have been certified by PCGS or NGC. A sticker of approval from CAC provides additional assurance. Generally, though, it is important to not buy coins blindly and not take certified grades too seriously. The same coin may receive different grades from the same service at different times.

There are reasons to carefully inspect coins. It makes sense to learn about them.

Each buyer should first acquire coins that he or she regards as inexpensive. After spending a small amount of money, carefully examining Two Cent Pieces, and discussing them with experts, a collector may think about acquiring the key dates or higher grade coins that are relatively more expensive. Collecting is a process, and most collectors learn while they are collecting.

There is no collecting formula that is ideal for everyone. I suggest that Extremely Fine (XF) grade Two Cent Pieces are good values, from a logical perspective. A collector of XF grade coins could save money by buying Fine-12 grade representatives of the two keys, the 1872 and the 1864 Small Motto.

Two Cent Pieces are the first U.S. coins to feature the motto, “In God We Trust.” On both Two Cent Pieces and Shield nickels, this motto is prominent on the obverse (front of the coin). Shield nickels were not introduced until 1866. That same year, this motto was added to the respective reverse designs of quarters, half dollars, silver dollars, half eagles ($5 gold coins), eagles ($10 coins) and double eagles ($20).

During the first few months of 1864, a very small number of Proofs and a very small percentage of the eventual total of 1864 business strikes were struck from Small Motto obverse dies. Some researchers regard these pieces as prototypes. The size of the letters is not the only difference. The style and format of the letters are different as well. Small Motto Two Cent Pieces, though, are generally considered to be coins rather than patterns, and have been widely accepted as coins.

An 1864 Large Motto, the regular size, is much less expensive. In 2017, the Goldbergs auctioned an NGC certified MS65 Red & Brown (RB) coin, with a sticker of approval from CAC, for $441, a fraction of the value of an 1864 Small Motto with the same certification.

The 1872 should be one of the last coins acquired to complete a set. Each collector should see how his or her set is developing before pursuing an 1872. A couple of grade increments may indicate a large difference in value.

Besides the two keys, certified MS65BN Two Cent Pieces are not extremely expensive. The CPG® value estimates for the 1866 is $351, and just $422 for the 1866. The others are well under $1,000 each. Unless a buyer has a good idea as to how to identify original red color, I would advise against paying much of a premium for certified Red & Brown Two Cent Pieces. Many have been cleaned in the past. The Two Cent Pieces designated as full Red (RD) are usually not good values. It is imperative that the collectors who demand those consult experts. Copper and “bronze” coins tend to fade to brown over time, anyway.

Some standard references list overdates or recut dates along with the dates in the series as if such varieties should be included sets ‘by date.’ An overdate or a recut date may have the status of an additional date of a given year if the differences in the numerals are very much apparent without magnification.

This is true of Doubled Dies as well. The 1916/1916 Buffalo nickel and the 1955/1955 Lincoln cent are blatantly apparent doubled dies. The 1918/7-S Standing Liberty quarter is a very much apparent overdate. Among Two Cent Pieces, the listed varieties are subtle, require substantial magnification to interpret and are often ambiguous. Not one of them needs to be included for a set ‘by date’ to be complete.

In the grand scheme of classic U.S. coins, a complete set by date of Two Cent Pieces is not expensive. A collector should start by buying several Two Cent Pieces for amounts that the buyer regards as a small amount of money. Coins can easily be upgraded in the future. Two Cent Pieces are entertaining and collecting them should be fun.

Subscribe to July 2020 edition of CPG Market Review for the industry's most respected pricing and to read more articles just like this.

Hi great article , thank you . I have been working on a set of Two cent pieces , both proof and business. I have been trying to find Red Brown , but as you said it's hard to find any that are raw and true color. I stopped bidding on non-graded coins that may be colored by artificial means . There are so many out there . Now I just go be great and eye appeal. Thank you again for your artical , it was very informative , I do not see a lot on two cent pieces and they are a very interesting coin and also have a lot of history through the civil war .