Most collectors are unaware that a significant number of CAC approved coins have publicly sold for amounts between $50 and $150. 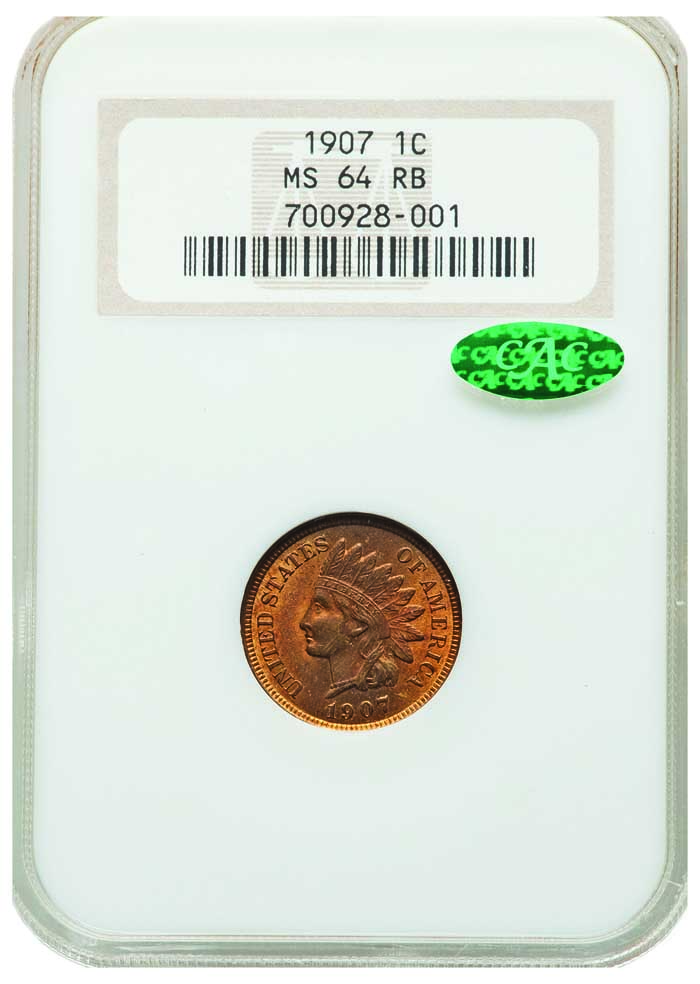 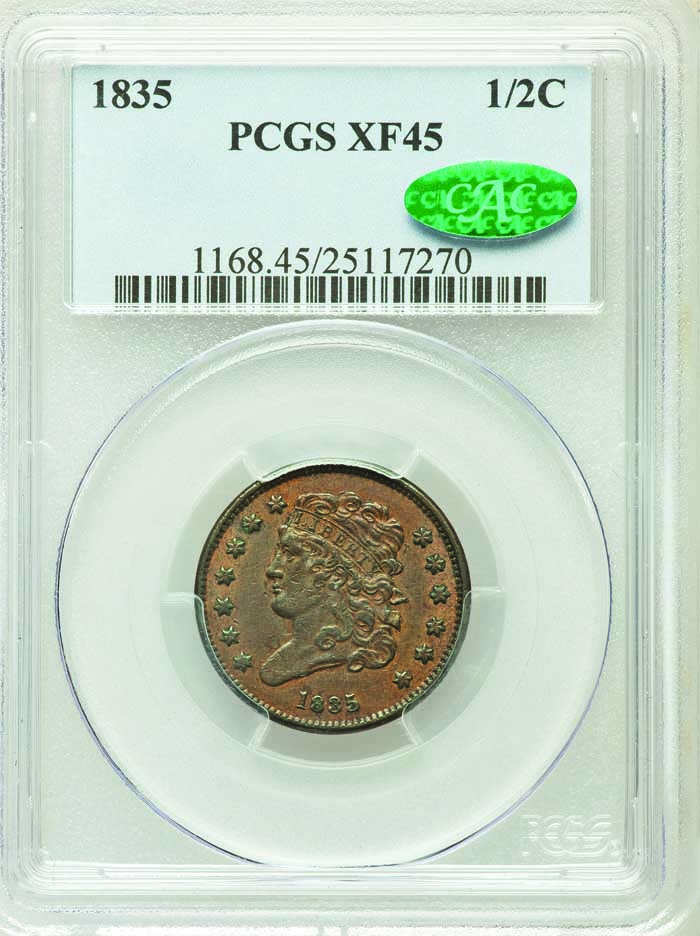 The point here is not that sets of CAC approved coins may be completed without spending more than $150 on any one coin. Indeed, I am not saying that at all.

The emphasis is on the idea that buying CAC approved coins for less than $150 each may be a valuable educational endeavor, and may be fun, too. Collectors can learn about grading and learn about series that they may decide to collect in the future. Rather than just talk or read about CAC approved coins in various series, it is potentially beneficial to carefully view the coins themselves.

CAC approved nickel and silver coins are also available for less than $150 each. There is a limit, though, to the material that can be covered in one discussion. The theme here is to show evidence and provide examples of the many CAC approved copper coins that publicly sold for less than $150 each over the last few years. Undoubtedly, many more sold privately at coin shows, in coin shops and by mail order.

I aim to convey an idea of the kinds of CAC approved coins that have sold for less than $150 each. While the scope and range of CAC coins in this price category are surprising, at least to me, it is important for prospective buyers to have realistic expectations. Only a small percentage of CAC approved coins have sold for less than $150 each, and there are not a large number available at any one point in time. Patience is likely to be required.

Of course, I realize that most collectors will make their own decisions in the contexts of their own tastes, preferences, interests and collecting budgets. It is hoped that this discussion provides ideas and information that will help coin buyers make decisions that will lead to satisfaction, success and enjoyment regarding their own collecting projects.

While the term ‘French Bronze’ refers to items that are 95% copper with the balance being tin and zinc, this definition is itself confusing as the portions of tin and zinc are not specified and there other credible definitions of the term bronze, some of which are inconsistent with the definition of ‘French Bronze.’ Moreover, definitions of bronze and brass overlap. It is logical to use the term copper to refer to bronze or brass coins that are at least 95% copper. 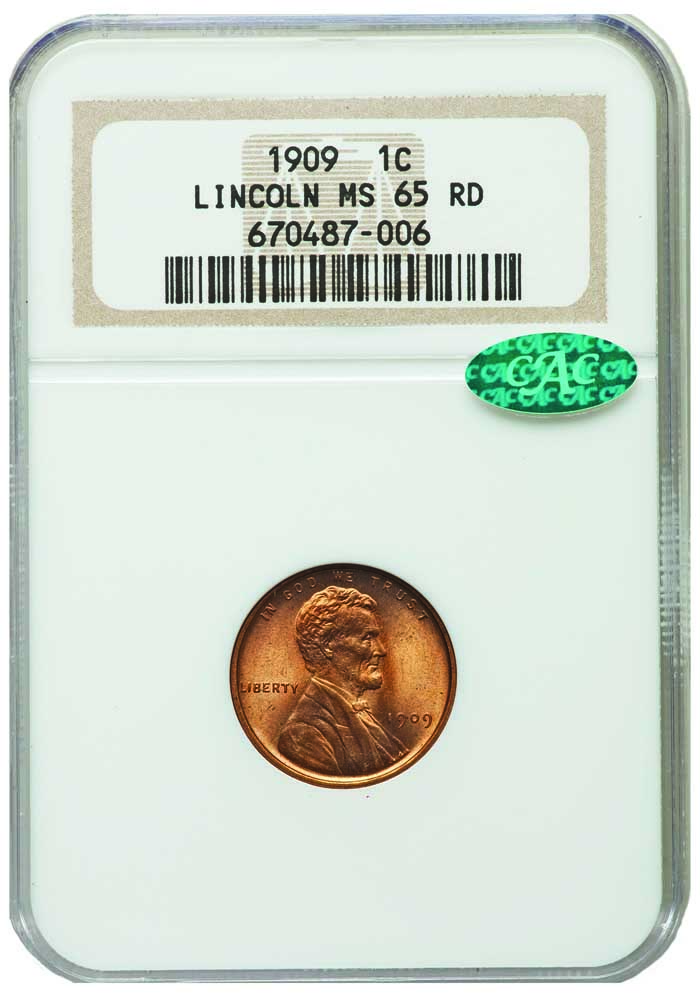 I am not dwelling on vocabulary or on copper as a metal. The focus here is on the idea of buying inexpensive, CAC approved coins for enjoyment and/or for use as educational tools regarding future quests, which may be very costly. Collectors are encouraged to learn about areas outside of their current respective interests.

According to the CPG®-CAC price guide, there are more than a few CAC approved half cents that have estimated retail values below $100. Of course, price guides are intended to be helpful in a general way, and it should not be assumed that a corresponding actual coin is being offered for sale for each of the prices listed in current guides.

In the CPG®-CAC guide, 1826 half cents graded below VF30 are valued at less than $100 each, yet there are no CAC approved 1826 half cents in grades below VF30. Perhaps it would be beneficial to collectors if more circulated half cents were submitted to CAC?

There are many inexpensive Bronze Indian cents around, which date from 1864 to 1909, though most of the low-cost pieces have never been sent to CAC. A large part of a CAC-only set could be assembled without spending more than $150 on any one Indian cent. 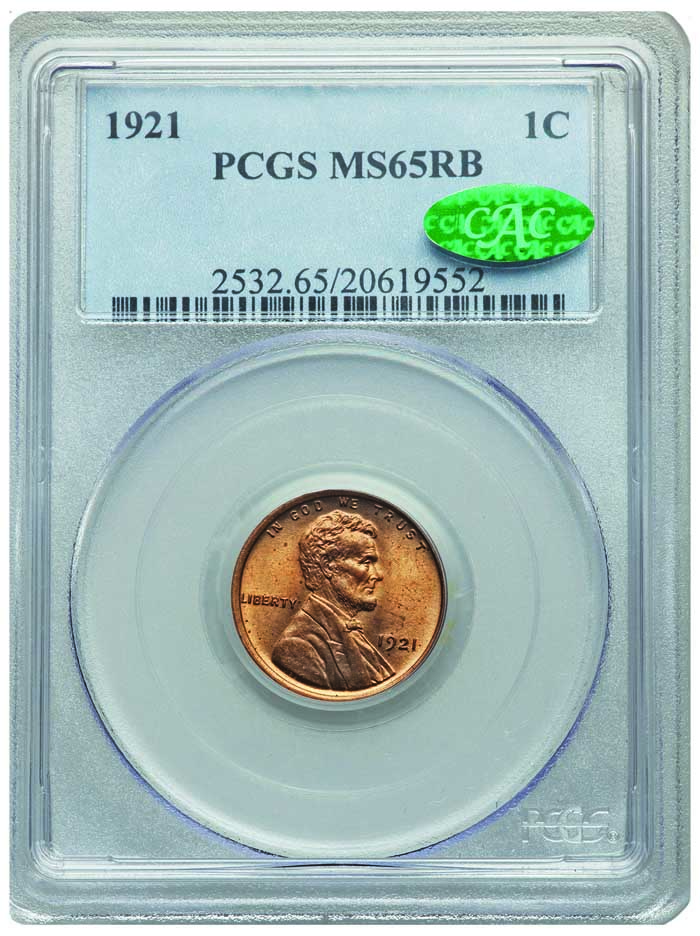 Among Lincoln cents, it makes sense to refer to CAC approved coins minted before 1934. Generally, uncirculated coins minted after 1934 survive in very large quantities. The premiums for superb quality condition rarities of extremely common coins constitute a different topic, beside the theme here.

On July 11, 2018, Heritage sold a CAC approved, PCGS graded MS65 1909 VDB Lincoln cent with a full red (RD) designation for $89. It may be educational to see some red color on an early Lincoln, which experts at CAC find to be original. Original shades of red, though, are different on different Lincoln cents depending upon the year minted and means of storage since then.

On January 23, 2018, Heritage sold a CAC approved, PCGS graded 1909 VDB Lincoln cent with a red & brown (RB) designation for $74. As a one-year subtype and the first issue of Lincolns, 1909 VDB Lincolns are especially significant.

1922 plain was considered an oddity by kids who I knew when I was nine years old. Furthermore, the 1922 plain was difficult to appreciate in a low grade, as both the 1922 ‘Plain’ and the 1922-D are characterized by weakly struck obverses. Also, doubled dies were then considered errors that were not required for general sets.

The 1931-S was one of the big three, given our objectives. Of course, we knew that several other dates were scarcer than the 1931-S in higher grades, especially in uncirculated. We were happy to obtain better date Lincolns in any grade.

To collectors who I knew when I was a kid, the 1931-S was extremely important. Now, a CAC approved 1931-S for less than $100 may have symbolic significance and sentimental value for collectors who remember building sets of Lincoln cents, decades ago.

When I was a kid, no one who I knew collected Two Cent pieces, though these are neat and not extremely expensive. Most have not been submitted to CAC. A few CAC approved Two Cent pieces could, in theory, be purchased for less than $150 each.

In the CPG®-CAC price guide, there are listed numerous CAC approved Two Cent pieces valued at well under $100, but have populations of zero. If more collectors intensely demand CAC approved coins in general that cost less than $150 each, many PCGS or NGC graded coins around that are currently worth less than $150 will be sent to CAC to meet such increased demand.

Even if CAC populations of coins currently worth less than $150 each were to markedly increase, it would still be true that collectors focusing on CAC approved, classic U.S. (pre-1934) coins should plan on spending much more than $150 in most instances. Buying some CAC approved coins for less than $150 each could be fun and may help collectors prepare in case they feel like moving on to new projects in the future.

Subscribe to November 2020 edition of CAC Magazine for the industry's most respected pricing and to read more articles just like this.