CAC Coins For Less Than $150 Each, Part 5: Franklin Halves

The feature editorial from the Spring 2022 edition of the CAC Rare Coin Market Review. 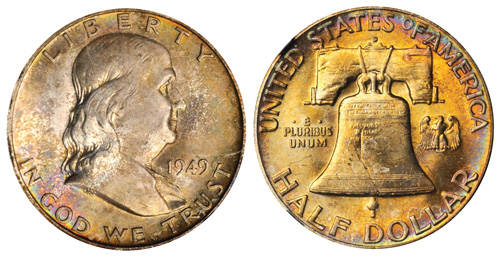 The first part of this series on CAC approved coins that cost less than $150 each was about classic U.S. copper coins. The second focused on Buffalo nickels. The third concerned Barber Dimes. Washington quarters were the topic of the fourth. The present discussion is about building a set of regular issue, Franklin half dollars, with emphasis on CAC approved coins.

In my view, collectors should focus on buying attractive, fairly graded Franklin halves without obsessing about ‘bell lines’ or one-increment differentials in certified grades. Even on coins where the bell lines are as full as they can be, the bell lines are not particularly noticeable and are not central to the design of a Franklin half dollar.

Franklin half dollars were minted from 1948 to 1963. With an unlimited budget, there would be no challenge to completing a set; it would be too easy. A Franklin half set is challenging, however, if a $150 per coin limit is self-imposed and all of the representatives of better dates have CAC stickers. Better dates are relatively scarcer than the most common dates, and tend to cost more than the common dates.

Curiously, there is not a clear dividing line between better dates and very common dates in the series of Franklin half dollars. Moreover, a date can be relatively scarce in circulated grades and relatively common in mint state grades or vice versa. It is productive to think about the dates in the set in chronological order. Most of the earlier dates are better dates. It is realistic to expect to be able to acquire CAC approved better date Franklin halves for less than $150 each.

On May 29, 2019, Stack’s Bowers sold a CAC approved, NGC certified MS64FBL 1949-D for $70. This coin is very colorful. Orange-russet tones frequently develop on Franklin half dollars. Touches of blue are often seen, too.

A CAC approved PCGS certified MS63FBL 1950-D was sold for just $46.53 by GreatCollections on Sept. 19, 2021. The 1950-D is a better date. Certainly, building a set of Franklins is dramatically less costly than building a set of Walking Liberty halves or Barber half dollars in the same respective grade range. 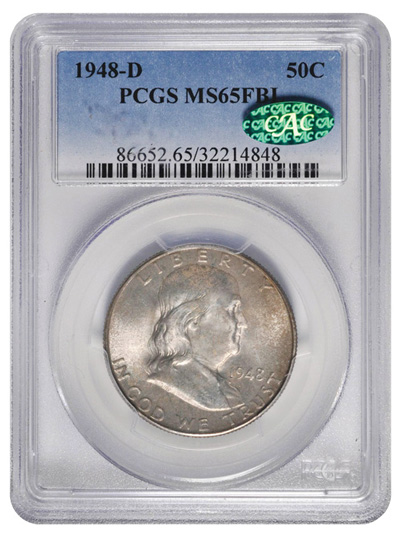 The largest premiums for FBL designations are for 1953-S halves. Indeed, these premiums are astonishing.

It is not difficult to acquire appealing 1954, 1954-D and 1954-S Franklins and other common dates, though it might not be practical to focus exclusively on CAC approved coins. Many dealers figure that it is not cost-effective to send very common Franklins in MS63 to MS65 grades to CAC.

Especially in regard to common date Franklins, collectors should be emotionally and financially prepared to occasionally acquire a coin that later is found to be not all that great. Raw (uncertified) coins are sometimes not accurately represented by dealers. Moreover, there are no perfect graders and there never will be a perfect grading service. It is important to not take certified grades too seriously.

Some collectors may wish to buy CAC approved representatives of better date Franklins before accumulating the common dates, as the pursuit of CAC approved coins can be particularly educational. Other collectors may wish to buy common date Franklins first, including some raw coins, with the idea of learning while spending only very small amounts on coins. 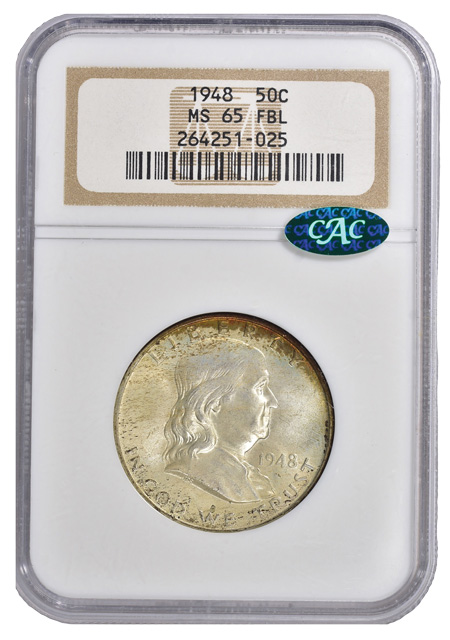 In June 2022, for raw MS64 grade Franklins minted after 1953.Greysheet Bid (top wholesale level) was typically less than $27 each, just $20 for most dates. Dealers may charge $25 to $40 each for these. Acquisitions of a few raw Very Choice mint state grade Franklin halves would not involve much risk. Even overgraded or doctored common coins have value, especially if they contain silver or gold.

In my view, it would be a good idea to acquire and study CAC approved representatives of some of the better dates before buying many common dates. Collectors tend to learn while collecting.

In MS64 to 65 grades, the 1957, 1957-D, 1958, 1958-D, 1961, 1963, and 1963-D are among the most common dates in the whole series. Would it make sense for a collector to seek nice raw “MS64” grade, common date Franklin halves for less than $30 each? The answer to this question really depends upon the knowledge, objectives, budget, personality, and grading skills of the respective collector, and his or her access to Franklin half dollars.

On March 27, 2022, GreatCollections sold a CAC approved MS63 grade 1959-D for $56.51. A realistic possibility, though, is that at least two serious bidders for this coin were seeking to crack it out of its first generation PCGS holder and submit it to PCGS with the idea of receiving a higher grade. Also, there are buyers who will pay a substantial premium for a coin in a first generation PCGS holder because the holder itself is a strongly demanded collector’s item even if the coin inside is not all that desirable. 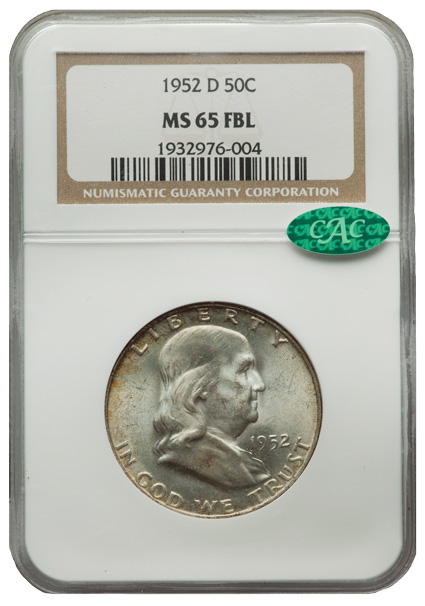 In 2021, GreatCollections sold two CAC approved, PCGS certified MS64FBL 1960-D halves for $46.16 and $51.78, respectively. These were both in old PCGS holders. The coin that realized $51.78 was in an older holder, though that might not be the reason why it brought more.

Premiums paid for old holders or especially colorful coins are beside the question of whether to include raw coins in a set that contains many CAC approved Franklin half dollars. There are a large number of MS63 to -65 grade Franklin half dollars that have never been certified. There are plenty of others that have been graded by PCGS or NGC, and never sent to CAC. Submission and shipping costs are relevant.

Some collectors, however, just enjoy buying CAC approved coins and not thinking much about grading practices. Please see my explanation regarding the meaning and role of CAC in the premier issue of the CAC Rare Coin Market Review (https://tinyurl.com/ReducingRisk).

There is more than one way to sensibly and enjoyably assemble a set of Franklin half dollars, without spending much on any one coin. It is not unusual for collectors to modify or change their objectives while having fun collecting.

Subscribe to August 2022 edition of CAC Magazine for the industry's most respected pricing and to read more articles just like this.