For those considering a collection of Bust half dollars, deciding the contents of the initial collection can be daunting and confusing -- yet profoundly important. In Part 1 of this series review, expert numismatic journalist Greg Reynolds offers some considerations about how to get started. 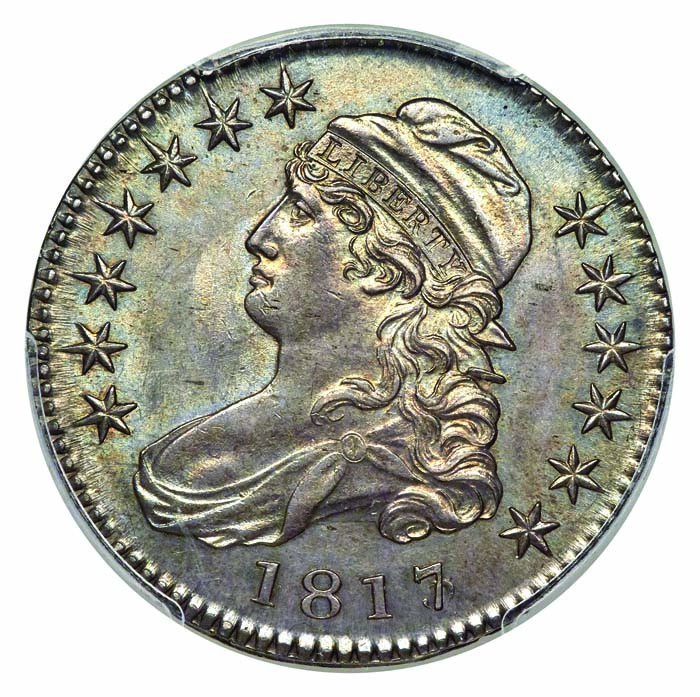 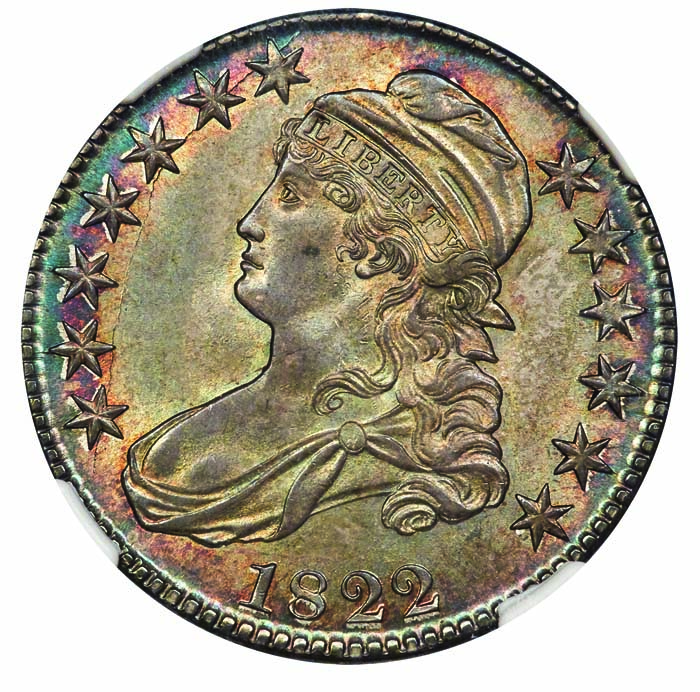 An 1822 Bust half dollar with original, colorful surfaces.

Unfortunately, almost all standard references list so many complicated varieties that potential collectors of Capped Bust half dollars are confused or discouraged from starting a set. Certainly, I am demonstrating that assembling a set of Capped Bust half dollars ‘by date’ is a relatively simple project. It will later be explained that an almost-complete set is not expensive.

The topic of this series of discussions is the design type of half dollars dating from 1807 to 1836. These are truthfully called Lettered Edge Capped Bust half dollars. The Bust halves of the type dating from 1836 to 1839 were struck with reeded edges.

While based upon truths, the Lettered Edge and Reeded Edge names are misleading, as these names put forth the impression that the primary distinctions between the two types are the edge devices. Such misleading names sometimes cause beginners to think that this is the only difference or is the major difference. 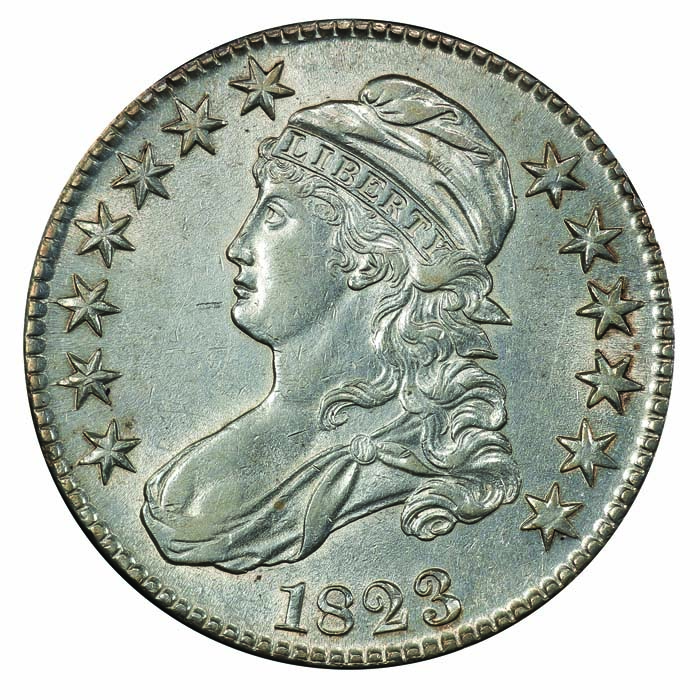 The second type (1836–39) of Capped Bust halves is apparently the work of Christian Gobrecht, the mastermind behind Liberty Seated silver coins and the first type of Liberty Head Eagles ($10 gold coins). Indeed, the head of Miss Liberty on these is almost certainly Gobrecht’s work. It makes sense to refer to these as Gobrecht Capped bust half dollars, rather than as “Reeded Edge” Capped Bust half dollars.

Reich (1807–36) and Gobrecht (1836–39) Capped Bust halves are quite different in form, style, striking characteristics, and physical structure. Differences are partly due to implementations of advances in technology at the Philadelphia Mint.

Before the mid 1830s, the appearances of coins of the same design type tended to vary more than they did afterwards. If a set of Reich Capped Bust halves, 1807 to 1836, was laid out on a table, a careful observer would notice that the head of Miss Liberty changed over time, in terms of size, relief, hair curls and facial expressions. While most such distinctions are subtle, they are interesting. It could be fairly maintained that there are a few subtypes. There are additional differences in design elements among Reich Capped Bust halves, not just differences in the head of Miss Liberty, including the size and styles of stars, the size of the eagle, and especially the fonts employed.

I am referring here to differences that are apparent when viewing a set consisting of one coin of each date. Differences among obverse (front) dies of the same respective dates are a separate matter. While there are more than one hundred people who collect Reich Capped Bust halves by die pairing, such pursuits will not be covered in this series of articles. 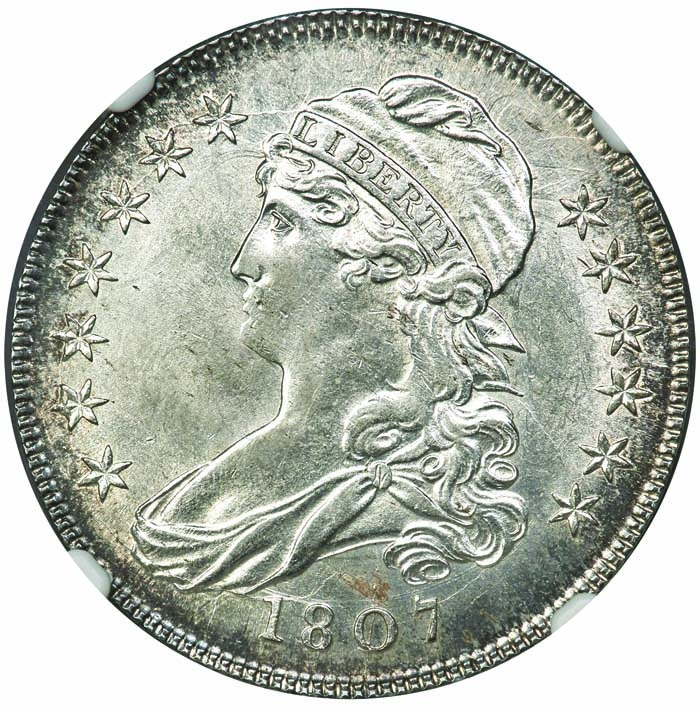 Besides, it makes sense to complete a set ‘by date’ before even thinking about collecting by die pairing. A set by die pairing that is more than 95% complete may require many years, while a set ‘by date’ could be almost-completed in a relatively short time. Here, a set by date refers not only to the year on a coin but also to readily visible major varieties, particularly overdates that can be easily seen without magnification and definitively identified. The 1817 with normal numerals, the 1817/3 overdate and the 1817/4 are three different dates, while the 1817 “punctuated date” is just an anomaly, not a distinct date.

The 1811 with such “punctuation,” too, is an anomaly with no readily apparent overdate. The “punctuation” varieties are curious and noteworthy, yet they are not required for a set.

It is especially surprising that some edge varieties of 1809 halves are collected separately and thought to be needed for general sets, including sets by date! These are oddities that are hard to discern. Moreover, there are noticeable edge varieties of many other dates, too, which are not itemized in widely available price guides. It is illogical for the edge varieties of 1809 to customarily receive multiple listings in general references and to be included as major varieties.

Most collectors of Capped Bust halves should just ignore edge varieties; they provide obstacles to collecting quests. These should be left for specialists who focus on mint-caused variations and anomalies.

In the realm of Capped Bust halves, there are so many variations in the sizes of numerals and the respective fonts that a difference in the shape of a numeral is not sufficient for a variety to have the status of an additional date of a given year. Ones and zeroes are often different sizes and noticeably different fonts were employed for the numeral two. In other series of U.S. coins, an especially large ‘0’ or a square base ‘2’ may really stand out and command attention, not in the series of Capped Bust halves where such varieties are routine and hard to remember.

The varieties of the numeral ‘3’ in 1823 halves are very unusual and command attention.

While a collector is finishing a set by date, the collector will know whether he or she really wishes to pursue die pairings, die states and various anomalies. Most collectors will move on to other projects, though dozens of collectors spend decades focusing upon Capped Bust halves. Indeed, the Bust Half Nut Club is devoted to the study and collecting of all the varieties. Personally, I emphasize that almost-completing a set by date is not difficult, and I suggest that a set by date is enough for most collectors.

The 1807 “Bearded Goddess” variety is just the product of an odd fracture in an obverse die, which provides an illusion that something is connected to Miss Liberty’s chin. This is a die state, which should not be collected as an additional date of the year 1807. This variety is not even needed for a set of all die pairings. I do not understand why this grotesque anomaly is so famous.

The 1807 overdenomination “50/20” variety is minor and unconvincing. There was some die work, but the extent and nature of such die work at the Philadelphia Mint is not really clear, at least not without extreme magnification and some imagination. As for the 1807 Large Stars and 1807 Small Stars, these should have the status of two distinct dates. The stars are not merely different in size; they are different in shape and placement. The overall appearances of the respective obverses are very much distinct from each other.

While the numeral two in the so called “1812/1” is disfigured, the nature of the disfigurement is ambiguous. This comes across as a die variety not as a bold overdate. There are multiple reasons as to why U.S. Mint workers often tooled on and about the numerals in a die. Furthermore, differences in the numeral eight of 1812 or “1812/1” halves are real, yet do not really capture the attention of typical collectors. These are minor.

The 1814/3 is obviously an overdate of some sort, although a little thought is required to perceive it. Even so, it is apparent enough such that it could be fairly argued that an 1814/3 and an 1814 with normal numerals should both be included in a set by date.

The so called 1824 overdates are just too cryptic. A microscope would be required to even theorize about them. The 1827/6, if it really is an 1827/6 overdate, would require a microscope as well and is not a major variety.

The 1834 Small Date and the 1834 Large Date really are two separate dates. The issue is not a single numeral or a difference in font; the Large Date in this case is dramatically larger than the Small Date. These two varieties appear as though they are deliberate variations in design, not just anomalies. In my view, both are required for a complete set by date.

It makes sense to repeat that a set by date is here being advocated as an objective. Unquestionably, though, die pairings are intriguing and important, especially for authentication and pedigrees. Collecting by die pairing or die state can be fascinating. It is a good idea, though, for a collector to gauge his or her enthusiasm for a series before embarking upon a long term project. Collectors tend to learn from experience and by posing questions to experts.

Personally, I would rather complete sets by date of several different types of coins rather than spend an enormous amount of time seeking die varieties of one type of coins. I respect collectors who think otherwise. There will never be a single collecting formula that is suitable for everyone.

Where to start? Lettered Edge Halves 1807-1836 have many differences other than “engravers designs” IMO, struck on different types of presses, different Silver weights, in addition to size of coins. Let’s just call the1807-1836 Lettered Edge Capped Bust Half Dollars what they are. As to a date set, just obtain each separate date without regard to Overdates, StarSizes, Die Hubs, etc. Calling a 1823 O.110 a “broken 3”, and 110a “patched3”, the 3 isn’t considered “broken if the top part of the 3 doesn’t “lean” backward, ex:1823 O.101,O101a. My opinion is a “Date Set” contains 1 of each date from 1807-1836, less year 1816 which were not minted. With respect to the “Bearded Goddess not even being in a Die Marriage Set, it is an Die Stage of Overton 111 Die Marriage and thus is included in a Set of All Die Pairings. The above mentioned are “corrections and distinctions ” to what is just wrong information on either of the 1807 O.111, O.111a, O.111b not being DM of “All Die pairings”, but “what makes a date set” is Just my opinion. Respectfully, Chuck